They undertake the mission to catalog the oceanic microbiome 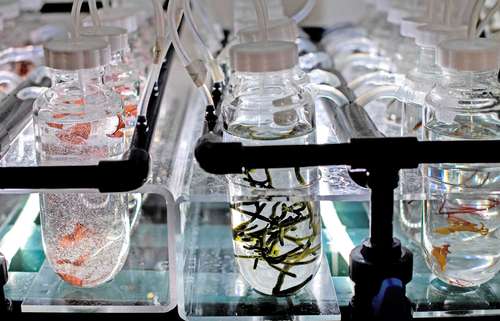 Roscoff. Between 10 billion and 100 billion living organisms inhabit each liter of seawater. But this ocean microbiomewhich has made the planet habitable, remains largely unknown and a scientific mission, carried out with the French Navy, aims to catalog it.

Planet Earth’s microbiome is the theme of the centuryassures Colomban de Vargas, research director of the CNRS, the French center for scientific research, at the Roscoff biological station.

this swiss, obsessed with explorationdevoted himself to mapping oceanic plankton, this great microbe soup composed of viruses, bacteria, protists, animals, etc. These invisible woodsSailing at the mercy of ocean currents, they made the planet habitable, producing most of the oxygen we breathe, he explained.

Biodiversity is above all microbial. For 3 billion years, there was nothing but microbes, noted the researcher. However, It is not known what microbes we live with or how many there are on Earth.

Leveraging the lessons of the mission Tara Océanos, who has already carried out 220 measurements of marine microorganisms, Colomban de Vargas and his colleagues want to determine a cooperative, frugal, planetary and perennial measure of this invisible ocean life.

through the project Plankton Planet, The aim is to entrust, in the long term, economically accessible measuring instruments and sensors to the tens of thousands of sailboats, trade ships or goods transporters that ply the planet.

The goal is to understand the adaptation of the living in the face of brutal changes imposed by human activities.

But it is not obvious because it is necessary that the measure be homogeneousemphasizes Colomban de Vargas.

For its part, the mission Bougainville – in cooperation with the French Navy – aims to consolidate the reliability of the sensors of the plankton. To do this, 10 master’s students at the Sorbonne in Paris will embark on national navy ships such as biodiversity officers.

The students will travel the 11 million square kilometers of oceanic France in the Indian Ocean and the Pacific, aboard overseas support and assistance ships.

After testing off the coast of Brest, the first students will embark in September 2023, collecting thousands of biological data (images and DNA) until 2025.

The collected data, hundreds of billions of plankton images and DNA sequenceswill be stored in databases open to researchers from around the world, explained Columban de Vargas.

They will make it possible to control the health of marine ecosystems and their evolution based on pollution or global warming.

In addition, the researchers want to study the migration of animal plankton at depths of several hundred meters during the night, described as increased movement of biomass on the planet, and that it would be one of the engines of the carbon bomb involved in capturing carbon dioxide in the ocean.

The cost of the mission, which must be financed by patrons, is estimated at around 950 thousand dollars for the first three years.