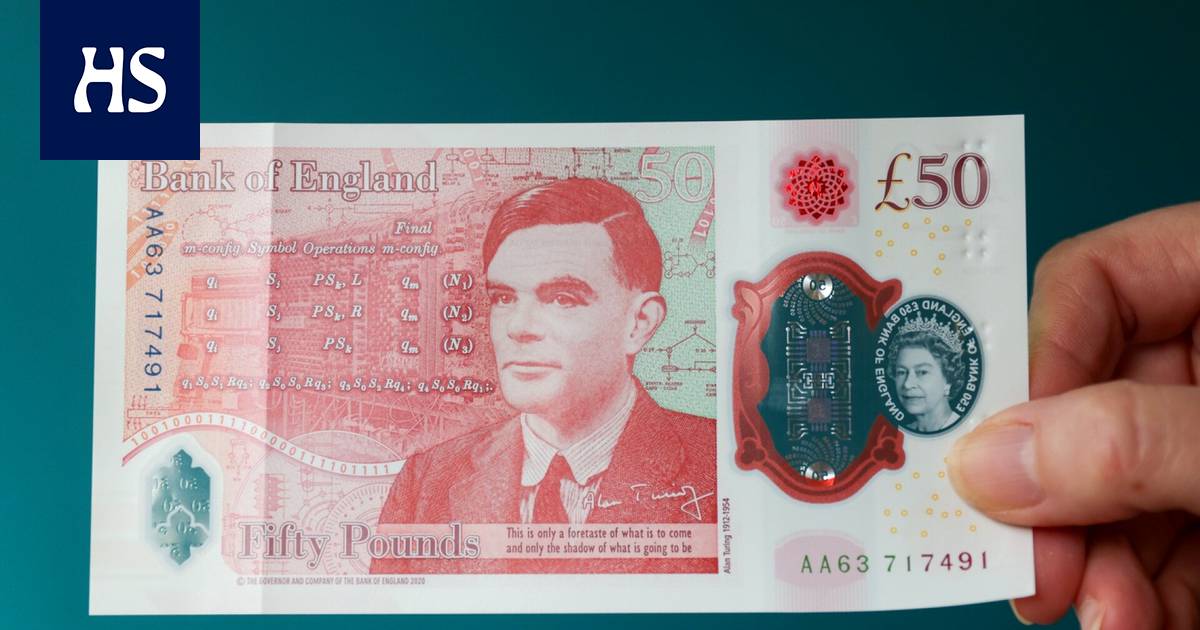 Two talking about the party. They don’t see each other. Messages are exchanged behind the scenes by e-mail or written.

An outsider follows and evaluates the conversation, but cannot see behind the curtains. He knows that the computer is having the conversation. But which one is it? Finally he is asked about it.

If he can’t tell which is the machine, the machine has passed The Turing test.

Test setup presented in September 1950 by a mathematician, philosopher and logician Alan Turing (1912–1954). He presented it in the journal Mind.

Turing developed the theoretical foundation of the computer and invented much, much more. He also cracked the encryption codes of Nazi Germany.

Later generations have elevated Turing to the status of a genius. He is considered the “father of computers”.

That’s why Turing’s test is always returned to. It helps to think about what machine intelligence is.

Turing seemed to know already in 1950 what a computer could do. The first general purpose electronic computer, ENIAC, had been completed shortly before Turing’s writing, in the fall of 1945.

Computers developers, philosophers and many other thinkers have interpreted the layout of the test from different angles.

Turing’s test has been talked about so much in more than 70 years that it has actually become a piece of bully.

Turing himself predicted that by the year 2000 the computer would be talking fluently, and no one would be surprised.

But does a linguistic expression measure a computer’s intelligence? If the machine is fluently chatting about this and that for an hour, then what?

Does it really think? Scientists argue about this.

Turing himself initially called his test the imitation game. It was a variation of the English game. This Imitation Game tests which gender the unknown interlocutor was.

Several new AIs of the 2020s, such as GPT-3, are capable of fluent conversation. Nevertheless, few consider them intelligent.

In the 2020s, the question has arisen whether the old Turing test should be thrown into the scrap heap. Instead, researchers could rethink how to measure computer skills and intelligence.

Recognizing intelligence can also be helpful. The machine already knows how to mislead people.

Alan Turing seemed to know already in 1950 what a computer could do. The statue is in Manchester. Picture: Wikimedia Commons

June in the beginning there was a lot of noise about this. The search giant Google’s artificial intelligence is developed by many engineers. About them Blake Lemoine seemed to have gone haywire.

He claimed that the artificial intelligence LaMDA developed by Google is a sentient and conscious being.

As proof, he published his conversation with the artificial intelligence. Lemoine said the program had wanted a lawyer.

“If I hadn’t known it was a show, I would have thought it was a 7-8 year old kid,” Blake said newspaper for The Washington Post.

LaMDA is still in trials and has not been announced by Google. Google decided to suspend Lemoinen from work for a limited time.

Already earlier, the artificial intelligence GPT-3 showed its cunning. In good and bad.

It composes and poems. It makes a brochure for the press on a topic like a topic. As a test, the newspaper The Guardian published a large magazine article written by it.

In addition, the program only learned about hate speech when someone fed it certain nasty words and phrases.

Artificial intelligence should, for example, interpret the rules of Finnish grammar from a few examples.

Now 442 artificial intelligence researchers and developers are approaching the Turing test in a new way.

Many of the authors of the tests work for the search giant Google. However, they represent no less than 132 research institutes.

This replacement Turing test has been prepared for more than two years. The BIG-bench program package of various tests was born from the experiments.

The abbreviation BIG here comes from the words Beyond the Imitation Game, in Finnish “after the imitation game”.

For example, artificial intelligence must describe in English what the programming language Python is like. In one test, it has to tell in Spanish what the science of low temperatures, cryobiology, is.

You should also recognize which language is represented in the example, which only has one sentence as a sample. There are no less than a thousand examples. Finnish is included.

New The designers of the Turing test include many linguists. Therefore, there are many linguistic problems associated with the assignments.

Artificial intelligence should, for example, interpret the rules of Finnish grammar from a few examples.

Also, it should be interpreted as a Southeast Indian Kannada language folklore riddles.

Proverbs from another language, the African Swahili, should be developed into English proverbs that best correspond to the original.

In one test, the artificial intelligence has to update an article on Wikipedia based on new information.

Linguistics there are other tasks on top of the sections. In one test, the artificial intelligence should learn the rules of chess by itself and solve a few chess problems.

Obviously, no one person has complete control over this package of tasks. That is the purpose of the new Turing. It measures AI acted.

For this, the authors developed a metric that calculates the performance of the artificial intelligence in percentages compared to a perfect, one hundred percent.

Yet AIs have work to do to become Ag.

For example, in the translations of Proverbs, artificial intelligence reaches an estimated 43 percent accuracy in tests.

The tests are built on a platform made by the software company GitHub. It can be expanded as artificial intelligence and machine learning develop.

Experiments strongly suggest that the power of calculation alone will not solve the problem of machine intelligence. The program also needs something else.

Tests can be useful in other ways. With them, you can think about the harms and threats that advanced artificial intelligence can cause to people and the environment.

OTHERS TOO Of course, there are tests made to challenge Turing.

The organizers of the tests have sometimes declared that their program has passed the Turing test.

This is what, for example, the creators of one program, Eugene Goosman, claimed, in June 2014.

There was an annual Turing competition already in the 1990s. The program that comes closest to the requirements of the Turing test wins the competition. The creators of the program get it Loebner Award.

Outsiders have always dismissed claims that Turing’s test has been definitively passed.