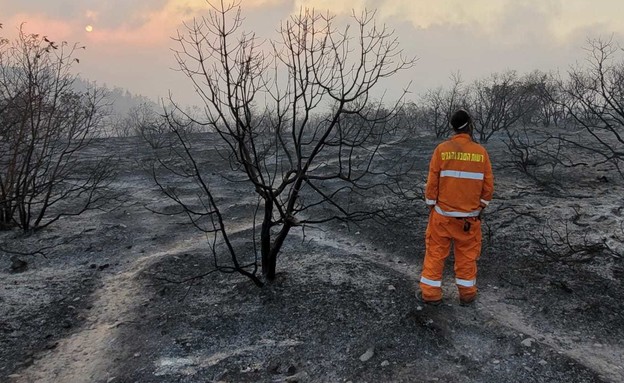 About two months after the fires in the Jerusalem mountains, the wildlife begins to recover. The fire in Nahal Kislon and Mount Pilots caused great damage to Mediterranean vegetation throughout the area – about 10,000 dunams went up in flames. During the fire many wild animals, especially small ones, found their cruel deaths, but now there is already documentation that nature is beginning to recover.

Amir Balavan, director of urban nature at the Society for the Protection of Nature, closely monitors and documents those who survived the huge fire and the re-emerging nature: In the last week, bloom 20-30 cm in size.

“At this rate, in 5-10 years the trees will return to their original size from before the fire. One of the impressive things is the red color against the burned area, of the pole trees. In addition, in the area you can see traces of returning animals – jackals, deer and hyenas, Birds of prey that have returned to their lands, “he says excitedly. “Migratory birds also land at night and feed on insects during the day.”

The Society for the Protection of Nature adds that “we are witnessing that with all the sorrow and damage of the fire – nature knows how to rehabilitate itself. But if the plans for massive construction in the Jerusalem mountains in general and White Ridge in particular are realized, nature will be lost forever. Jerusalem as a national park and will work to thwart construction plans. “