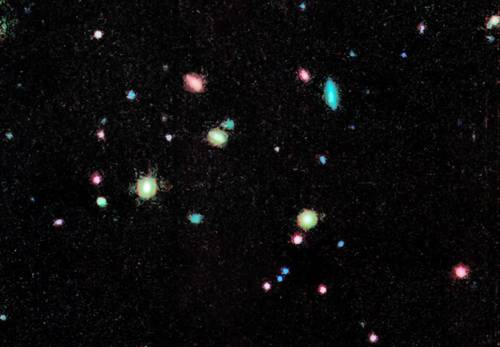 telescopic lens Galaxies that the Hubble had previously showed as pinpoints are now revealed by James Webb.

A plate was taken using a mid-infrared equipment mounted on the telescope that was created by a European partnership.

Madrid. A galaxy that the Hubble space telescope could only see as a pinpoint of light in the past is now visible in new photographs from the James Webb space telescope.

They give a significantly larger field of view than the first deep-field image, which was unveiled on July 12 to tremendous anticipation, and include objects older than 13 billion years.

These are some of the first pictures taken as part of the Ceers project, which stands for the English Cosmic Evolution Early Release Science Survey. This collaboration uses the new space telescope to investigate how some of the first galaxies formed when the universe was only 5% as old as it is now, a time known as reionization.

In addition to Pablo G. Pérez González from the Center for Astrobiology (CSIC-INTA) and 18 other co-investigators from 12 institutions, Ceers has more than 100 partners from ten other nations.

As a result, during the first week of data analysis, the team discovered a particularly intriguing object, a galaxy they called Maisie in honor of Steven Finkelstein’s daughter. It is thought to have existed about 300 million years after the Big Bang, according to a statement from CAB.

The information was gathered from a piece of sky close to the Big Dipper’s tail over the course of around 24 hours. The Hubble has previously observed this identical region of the sky in what is referred to as the Extended Groth Fringe.

“It is incredible to observe how what Hubble saw as a single point of light, Webb now sees as a full galaxy with stunning complexity. In addition, new galaxies appear out of nowhere,” stated Finkelstein, director of Ceers and associate professor of astronomy at the University of Texas at Austin.

The project’s incredibly sharp images have not only revealed distant galaxies, but also many fascinating and lovely objects, revealing the complexity of the evolution of galaxies throughout the life of the universe: some look like elegant windmills, others like small beings at the beginning of their lives, others show interactions with their neighbors that deform or even destroy them, and still others are scattered throughout the sky like dots in a Pac-Man game.

The CAB (CSIC-INTA) was a member of a European consortium that developed MIRI, an instrument that operates in the mid-infrared region. Compared to earlier mid-infrared telescopes, it operates at a substantially better spatial resolution.

The astrophysics community can now observe cosmic dust glowing from far-off star-forming galaxies and black holes as well as the light of the earliest stars in faraway galaxies thanks to MIRI, which has a smaller field of view than NIRcam but can detect longer wavelengths.

Eight times sharper than what we previously had, MIRI photos are stunning, as Perez Gonzalez noted. The CAB (CSIC-INTA) researcher, who is an authority on the use of infrared data to investigate the evolution of galaxies at various cosmological distances, continued, “The universe shocks us at every stage of every significant astrophysics mission. We generally assume that because we are so close to the Big Bang, the galaxies must be quite young and we should practically be able to see the first one. However, James Webb is showing us that very huge galaxies have already undergone significant evolution. Almost all of the universe’s history, galaxies have been created with incredible efficiency. Additionally, there are sophisticated chemical substances that must impact the appearance of life.

Over 60 hours of telescope time are allotted for the Ceers program, and over half of that time has already been used. It will be finished in December with the addition of significantly more image data and spectroscopic observations of hundreds of far-off galaxies.

Casemiro does not travel to Vigo