Superstar volcanoes as cause of ancient mass destruction 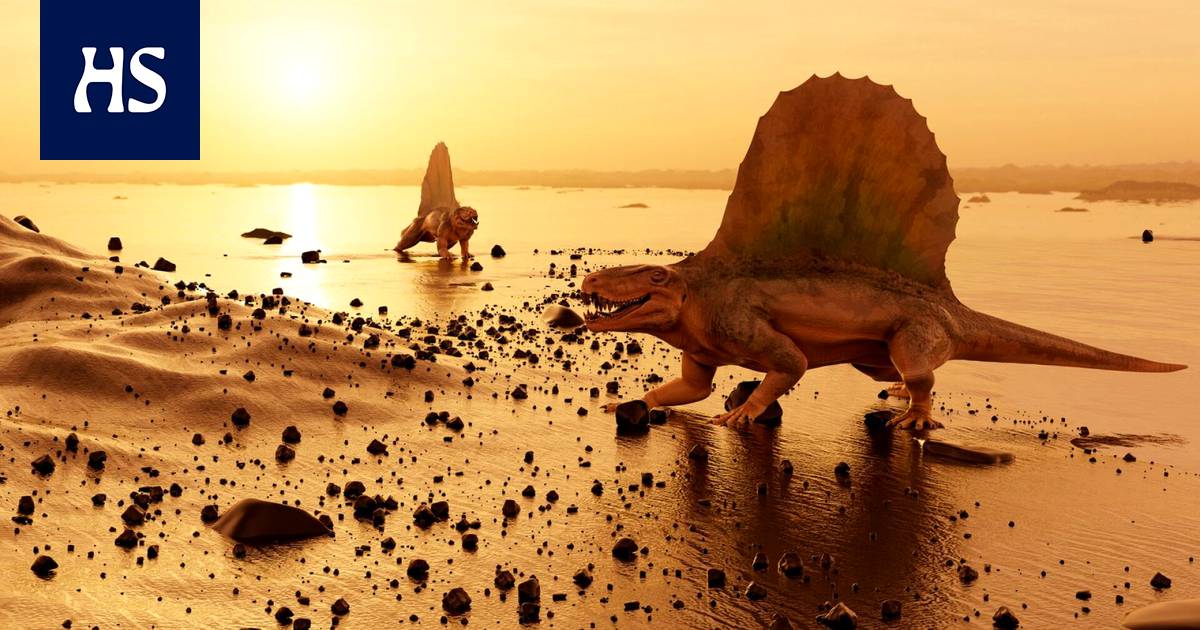 Dinosaurs disappeared from the earth 66 million years ago when an asteroid hit the earth.

However, it was not the most destructive extinction wave in world history. The life of the Earth experienced a real destruction even before the dinosaurs, about 252 million years ago.

It was the mass extinction at the end of the Permian period, in which, according to estimates, more than 90 percent of all species were destroyed.

However, the destruction of the Permian period was not caused by an asteroid impact, but by the Earth’s own forces.

This Permian Mesosaurus brasiliensis was a sauropsis and one of the first reptiles to return from land to water. It grew to about a meter long. Picture: PASCAL GOETGHELUCK/SCIENCE PHOTO LIBRARY

“There have only been five major mass extinctions, and of these, the Permian extinction wave is the largest,” says the University of Helsinki researcher and paleoclimatologist Sakari Salonen.

Extinctions of various species are constantly followed, but mass extinctions are associated with extreme changes in the environment and living conditions.

Proof of the Permian environment change can be found in the area of ​​present-day Siberia. The beginning of the Permian period is scheduled for about 300 million years.

Huge lava fields have been found in the central parts of Siberia, the creation of which has been dated by radioactive decay dating back 250 million years, right at the end of the Permian period.

“There was enormous volcanic activity in Siberia at that time. In the Permian period, it was an exceptionally active volcanic period that lasted for hundreds of thousands of years,” says Salonen.

Salonen describes the situation caused by the constant bombardment of volcanoes as a climatic roller coaster.

The volcanoes first darkened the Sun’s light with their ash and thus cooled the planet.

At the same time, however, the eruptions also released carbon dioxide into the air, and its concentration slowly increased. Finally, the intensified greenhouse effect warmed the climate.

Unusually long-lasting volcanic episodes are a mystery to scientists.

“The dinosaur extinction wave caused by an asteroid is actually an exception,” he says.

Active volcanic episodes and so-called supercontinents are thought to be linked. The mechanism by which the supercontinent affects the increase in volcanism is not precisely known.

In any case, this kind of supercontinent period prevailed in the Permian period.

If the Earth had been viewed from space at that time, the planet would have looked unrecognizable to modern human eyes. The Earth’s continents were compressed into one large supercontinent, Pangea.

Volcanism the warming caused by the greenhouse effect set in motion upheavals that made it difficult for Permian animals to survive.

During the Permian period, the earth was inhabited by two large groups of animals, synapsids and sauropsids.

The group of synapsids included strange animals that somewhat resembled reptiles, but were more closely related to mammals.

Lystrosaurus, roughly the size of a pig, lived in the Permian period. Despite its appearance, it was not a dinosaur, but rather related to today’s mammals. Picture: JOHN SIBBICK/SCIENCE PHOTO LIBRARY

Synapsids have been misleadingly called “mammalian lizards”, although they were neither lizards nor reptiles. Their bones and skulls had more mammal-like features.

Synapsids are thought to have been the dominant group of animals in the Permian period.

Fossilized skull of the synapsid Cynognathus. It lived in the Triassic period, which began after the Permian mass extinction. Picture: NATURAL HISTORY MUSEUM, LONDON/SCIENCE PHOTO LIBRARY

Permian sauropsids, on the other hand, were the predecessors of dinosaurs, reptiles and birds. There were no actual dinosaurs in the Permian period.

Permikaund new information has been received this summer about the end’s exceptional conditions.

The new Irish-Swedish research according to the report, wildfires clearly increased at the end of the Permian period. In the background was the heat caused by the strengthening of the greenhouse effect.

The previously moist and green carbon-binding forests dried up and forest fires became more common in the regions. As a result, more carbon was released into the atmosphere.

The reduction of vegetation was fatal for land animals. In the end, drastic changes in climate and vegetation caused a mass extinction of animals.

The effects of climate change reached the sea a little later.

When the plants disappeared, their roots no longer held the soil in place. The silt and biomass released by the rain were carried into the sea. This put a strain on marine ecosystems, and it eventually caused a loss of oxygen in the seabed.

In addition, the increased carbon dioxide in the air promoted acidification, as a result of which many crustaceans dissolved in the water.

Evolutionary Paleontology professor Mikael Fortelius The University of Helsinki says that the top of the Permian extinction wave was only a blink of an eye in a geological sense.

According to Fortelius, some researchers have suggested that the extinction wave would have surprised even in less than a thousand years. Many scholars have rejected this view.

Looking at a new large-scale marine ecosystem research According to this, the first to recover from the destruction of the Permian period were the invertebrate animals that eat the sediment of the seabed, such as worms.

Their quadrupling on the sea floor, which lasted millions of years, raised the bottom from the soil to the water. This prevented stationary and water-filtering species such as corals from living.

Compared to the collapse, nature’s recovery was extremely slow. It took millions of years to recover from the extinction wave. The old Permian world with its characteristic features disappeared into non-existence.

“The biosphere never rebuilds so that the old one burns. After the Permian, it recovered in a hot world, meaning the species adapted to a completely different environment,” says Fortelius.

The Triassic period, which came after the Permian period, ushered in the 165-million-year reign of the dinosaurs.

“It has been estimated that species are now going extinct hundreds or thousands of times faster than during the last tens of millions of years,” says paleoclimatologist Salonen.

The concentration of carbon dioxide in the atmosphere has risen significantly since the industrial revolution that started about 200 years ago.

“Right now, the climate is warmer than it has been in a hundred thousand years,” says Salonen.

The consequences of the current climate change, such as the acidification of the seas and the loss of oxygen on the bottoms, are similar to those of the Permian period.

Only the source of the accelerating greenhouse effect is different – and the time span is thousands of times faster.

In addition, the Earth’s biota is burdened in many ways by other human activities, such as overfishing and construction, which were not even known about in the Permian period.

Ecosystems are extremely complex entities. The dependence relationships between species are not precisely known.

Therefore, it is impossible to accurately predict the impact of current climate change and the already ongoing extinctions on the global ecosystem and humans.

One thought on “Superstar volcanoes as cause of ancient mass destruction”