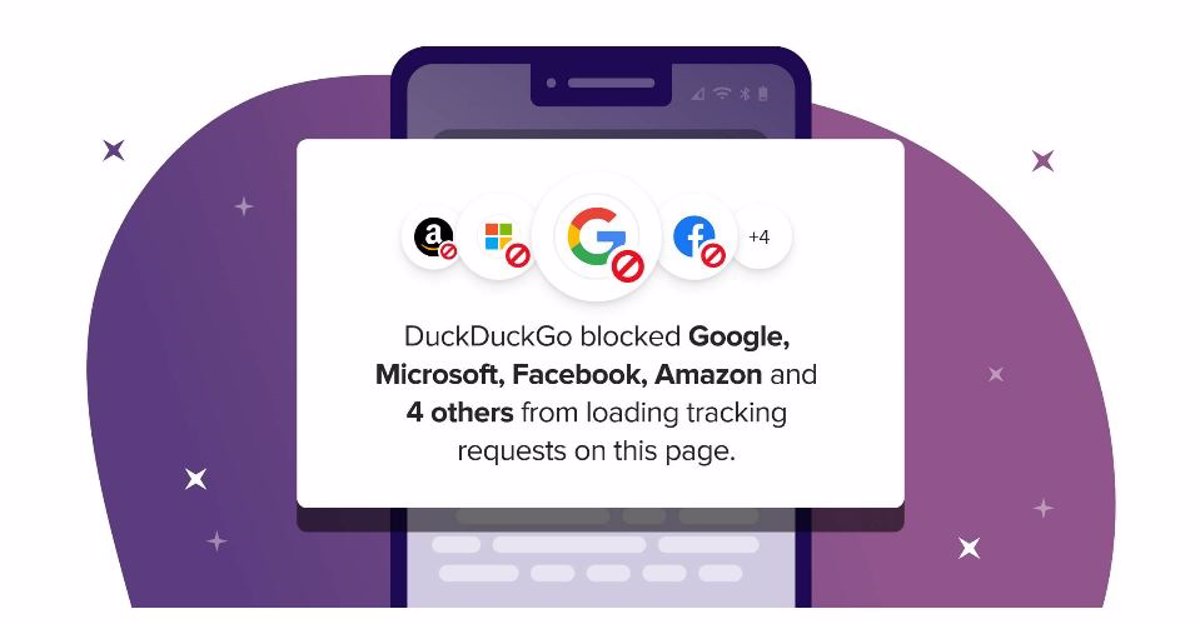 The browser of DuckDuckGo Finally, it will block Microsoft’s ‘trackers’ or trackers when users visit certain third-party websites, in order to maintain their privacy.

Since its launch, DuckDuckGo has been associated with security, since it was born as the alternative search engine to Google whose maxim was not to chase the user, neither analyzing their movements during browsing nor with personalized advertising.

However, cybersecurity expert Jacob Edwards announced a few months ago that DuckDuckGo’s browser did not live up to its motto, since it was unable to block some Microsoft trackers on iOS and Android.

To all this despite the fact that both in the App Store and in Google Play the company pointed out that its ‘Tracker Radar’ tool is responsible for “automatically blocking third-party trackers that lurk on websites.”

In response to this uproar, DuckDuckGo CEO Gabriel Weinberg explained that this was due to a “search syndication agreement” signed with Microsoft, which prevented it from completely limiting some of its scripts from being uploaded to third-party websites, such as Workplace.

Then, Weinberg also recognized that the browser “is not perfect and never will be”, since it is impossible to offer “100 percent” protection. However, he indicated that he was working with the Redmond company to “reduce or remove the limiting constraint” and to update the mentioned description in the app stores.

However, in a recent blog post, DuckDuckGo has announced that “over the next week” it will be expanding third-party tracking scripts, blocking them from loading on websites, and including Microsoft scripts in browser versions for iOS y Android.

The company has also acknowledged that it will apply this tracker blocking policy to its browser extensions for Chrome, Firefox, Safari, Microsoft Edge, and Opera with beta apps that will present “next month”.

“This expands our protection against third-party tracking, which blocks the loading of identified ‘scripts’ from Facebook, Google and other companies on third-party websites, to include Microsoft tracking ‘scripts,'” he said in this writing. .

With this, it has been recalled that its protection system prevents most third-party trackers from loading during browsing, something that was previously not possible with those developed by Microsoft due to the agreement between both companies.

“We are glad that this is no longer the case. We have not had and do not have any similar limitation with any other company,” said DuckDuckGo, who recalled that Microsoft’s scripts “were never embedded” in its search engine or in its applications.

Likewise, it has detailed that advertising on DuckDuckGo is carried out in collaboration with Microsoft, but that viewing these ads is anonymous, since its partner has agreed not to create profiles of its users.

“Microsoft Advertising does not associate your behavior with respect to an advertisement with a user profile. Nor does it store or share that information for statistical purposes,” it has argued.

DuckDuckGo has explained that in order to assess whether an ad is effective in your browser and conversions are being generated, Microsoft Advertising uses domain scripts. bat.bing.com. However, if advertisers want to detect conversions from their ads on DuckDuckGo, their security solution will block requests from this server.

With this, he has commented that, to replace this system and its dependence on bat.bing.com, as well as the effectiveness of these ads, he has begun to work on a specific architecture, just as Safari already does with the Measurement of private clicks (PCM) and Firefox in Interoperable Private Attribution (IPA).

“We believe this work is important because it means we can improve the advertising-based business model that countless companies depend on to offer free services making it more private, instead of scrapping it entirely,” the ad concludes.