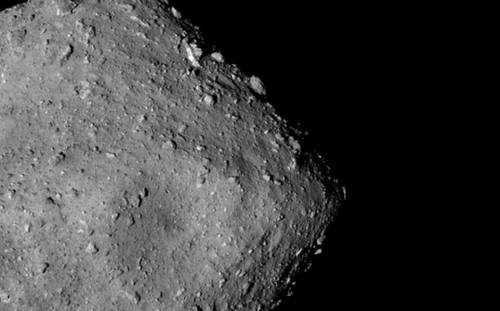 Tokyo. Asteroids that traveled from the edge of the solar system more than 4.5 billion kilometers away may have brought water and organic matter to Earth in its formative stage.

The hypothesis, published in the scientific journal Nature Astronomy by the Japan Aerospace Exploration Agency and others, was drawn from an analysis of samples from the asteroid Ryugu collected by the probe Hayabusa 2.

It remains a mystery how the Earth, which consisted almost entirely of molten magma in its initial formation, came to be covered in water.

In a broad sense, it is possible that the small celestial bodies brought things that led to water and life on EarthMotoo Ito, senior researcher for geomaterials science at the Japan Agency for Marine Earth Science and Technology, was quoted as saying by The Mainichi.

In December 2020, a capsule that had been carried on a six-year mission by Hayabusa 2 delivered more than 5.4 grams of surface material to Earth from asteroid Ryugu, located more than 300 million kilometers away.

While Ryugu’s particles showed a composition similar to that of Earth’s water, there were some slight differences, leading the researchers to hypothesize that the planet may also have gotten its water from places other than Earth. asteroids.

An analysis of eight particles, totaling approximately 59 milligrams, from the asteroid Ryugu found in almost all of them organic matter and water not in liquid form, but in a hydroxyl group consisting of an oxygen atom bonded to a hydrogen atom, with a composition similar to that of water contained in cosmic dust and comets.

Protected by a cradle of phyllosilicates, they are thought to have endured harsh environmental changes after leaving the outer solar system, where water and organic matter are present.

In the new report, scientists say the Ryugu samples offer clues to the mystery of the origin of oceans on Earth billions of years ago.

Volatile, organic-rich C-type asteroids may have been a major source of Earth’s waterhighlighted the study by scientists from Japan and other countries, published on Monday. The arrival of them (that is, organic elements and water) on Earth is still an important debate.he admitted.

But the organic materials found in the Ryugu particles, identified in this study, probably represent an important source of volatilehe added.

The researchers also found organic areas composed of a material known as aliphatic hydrocarbon within the relatively coarse-grained phyllosilicates. The surrounding coarse grains, which are more resistant to heat, may have prevented the water and organic matter from being altered by the environment.

Hayabusa 2 It left Earth in 2014 and reached its stationary position over Ryugu in June 2018 after traveling 3.2 billion kilometers in an elliptical orbit around the Sun for more than three years. The probe landed on the asteroid twice the following year, collecting the first subsurface samples from an asteroid.

Earlier, researchers discovered that Ryugu, born from a parent body formed in the outer solar system, traveled to the inner solar system and that its particles contain amino acids, organic compounds that are considered the source of life.