EDward Gaming is the new League of Legends world champion 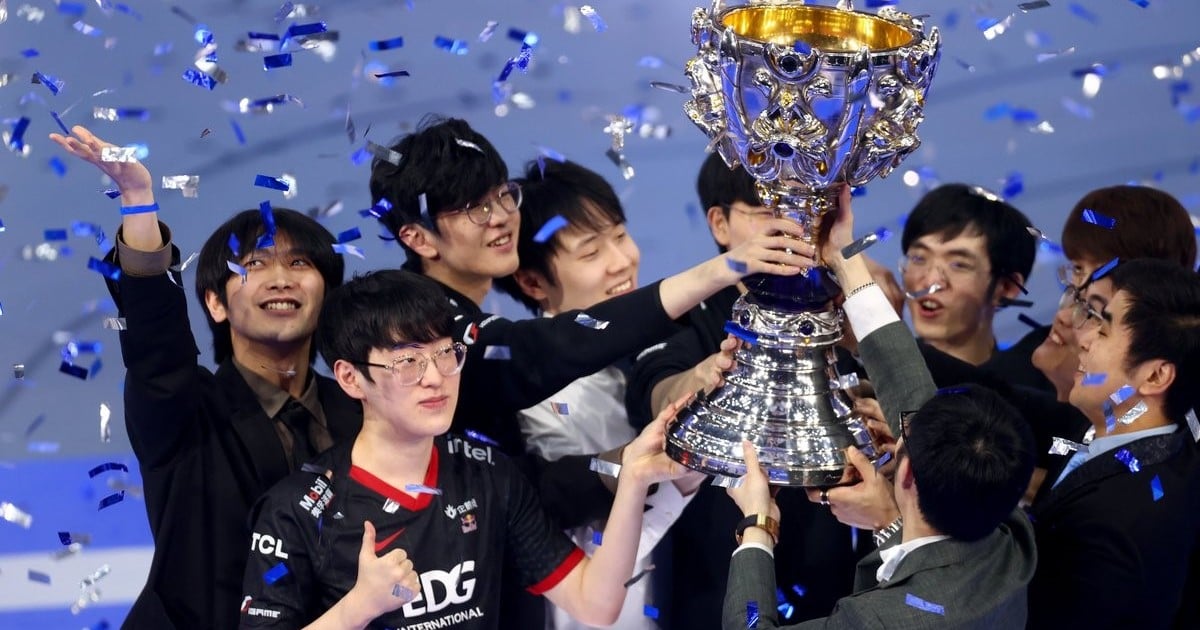 In an electrifying finale and a spectacular end of the season, EDward Gaming (EDG) is the 2021 Worlds champion after defeating DWG KIA (DAMWON KIA), champions of the 2020 edition, in a best-of-5 series.

Previously, and to warm up engines before the end of the Worlds 2021, the spectators could enjoy the show before the meeting between EDward Gaming and DWG KIA. He himself had the presence of music stars such as PVRIS, Denzel Curry, Bea Miller, J.I.D. e Imagine Dragons. In turn, Riot Games took advantage of the situation to publicize – once again – Arcane, the new Netflix series that will premiere today and will be based on the League of Legends universe.

With the musical show over, it was the turn of action at Summoner’s Rift. Before the match that would define the champion of the Worlds 2021 and best team of the season, DWG KIA arrived as a wide favorite. Not only for being the only undefeated team in the entire competition (8-0) but also for being the reigning champions of the 2020 edition of the League of Legends World Cup.

On the other side was EDward Gaming, a historic LPL team and current champion of the Chinese League of Legends. Unlike DWG KIA, EDG’s path had a rough ride on its way to the end of the Worlds 2021.

In the group stage, the Chinese finished second with a 4-2 record (behind T1). During the playoffs, the series against Royal Never Give Up (RNG) and Gen.G ended in the last best-of-5 match (3-2 in favor). The place in the finals of the world championship, they earned it through strength and dedication. That is an indisputable fact and today, on one more occasion, they demonstrated it again.

The first game in the series, like every year in the League of Legends world championship, It was a “greeting” between both groups. What appeared to be a simple procedure for DWG KIA ended up as a surprise to acquaintances and strangers.

The first encounter, after good rotations from bottom to middle lane, prioritization of targets like Herald of the Rift, and clever skirmishes, EDward Gaming struck first in the final with a score of 6-14. It was 1-0 and a clear message to the defending champions.

For the second in the series, DWG KIA would respond with authority. In total mastery of the map and the objectives, in addition to correcting their mistakes and taking advantage of EDward Gaming’s nervousness, they would win the next match with a score of 22-3. Not satisfied with this result, DAMWON -also- would win the third comfortably with a 7-17.

With just one game away from being two-time Worlds 2021 champions, DWG KIA had everything to win. However, on the other side was EDward Gaming who knew how to push his rivals in the previous elimination series to the limit and, once again, the result would be repeated. EDG won the fourth match with a close score of 6-3 and the fifth with a score of 9-20, for be crowned champions of the Worlds 2021.

What was the key to EDward Gaming’s victory? The limit the rotation options of the lower (Ghost and BeryL), center (ShowMaker) and jungle (Canyon) lanes of DWG KIA, its strongest points throughout the Worlds 2021.

EDG achieved its goal and knew how to enhance its strengths, such as taking advantage of the explosiveness of its ADC (Viper), the head of the team and one of the best players during this edition of the League of Legends world championship.

In this way, in the Worlds 2021, EDward gaming earns the organization’s first League of Legends world title, the third for the LPL (previously won by FunPlus Phoenix in 2019 and Invictus Gaming in 2018) and they were able to break the LCK’s curse on Chinese teams by becoming the first team from China to win a final against a Korean organization.

After the end of the Worlds 2021, League of Legends season It will come to an end on November 16 of this year. For season 12 of 2022, Riot Games has prepared to add new modes to the game, items and up to 2 more dragons to Summoner’s Rift (Hextech and Technochemical).