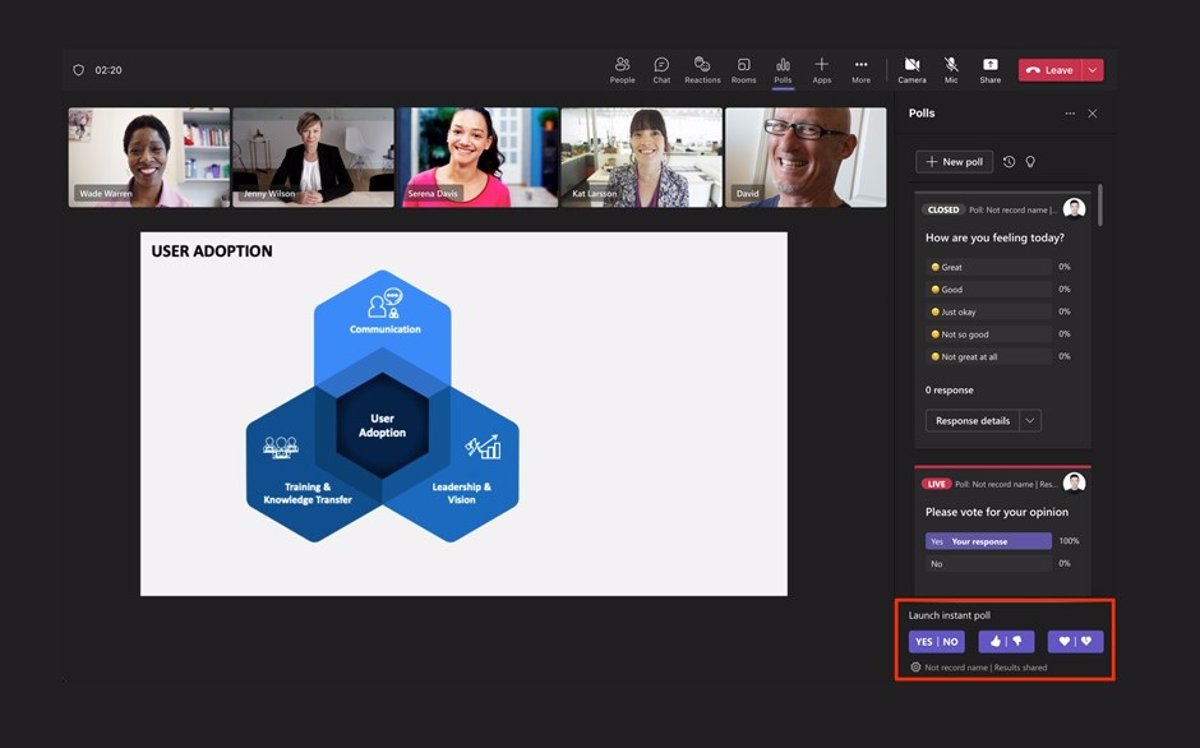 The platform Microsoft Teams has implemented a series of updates that will allow launching instant surveys in meetings and calls, as well as sending scheduled messages and viewing up to 49 videos simultaneously in meetings, among other novelties.

Microsoft has released in detail the new features integrated into this unified communication and collaboration platform focused on the workplace, with which it seeks to offer features that facilitate the use of both chat and video conferencing.

Among these functions, the ability to launch instant polls in meetings. With this tool, it will be possible to know the opinion of the participants of a video call instantly, since it shows the results as the votes are cast.

As Microsoft has explained, just by clicking on the binary surveys section you can obtain a quick record during predefined responses of the type yes or no, thumbs up or down, as well as a full or broken heart. To ask the question, it will only be necessary to ask a question out loud and, later, click on the survey icon.

Another of the new advantages of Microsoft Teams is its new ability to display up to 49 windows (7×7) of video at the same time and in the same interface. This means that in large gatherings more screens can be seen simultaneously than until the arrival of this novelty, when seeing up to 9 videos (3×3) in the meetings panel.

So, in order to see more of those 9 videos at the same time, it was necessary to select the Gallery view (or Gallery View), an action that has been eliminated with the integration of these nine screens in the same interface.

Another one of the updates allows transcription of calls for Android systems, for both one-way calls (1:1) and group calls. This function will transform all the conversation that is framed in a meeting into text format.

SCHEDULED MESSAGES IN THE CHAT

On the other hand, regarding the updated functions in the chats, the user will be able to schedule a message, manually selecting the date and time on which you want it to be sent, by right-clicking.

As Microsoft has explained, this option has been enabled as there are more and more users working remotely or with flexible work hours and in different time zones. This system, in addition works in a similar way to the function that was already used by Outlook.

From now on you can also start conversations in lists distribution groups, security groups, and Office 365 groups, in which the maximum quota of 250 members per group remains. Users will also be able accept or block a group chat invitation from a user outside of your organization.

This feature was already possible in individual chats, but from this moment it can also be carried out in group conversations.

Similarly, Microsoft has embraced the ability to filter notifications of unread chats so that only these conversations are displayed. To activate this feature, the user must go to the ‘Activity’ tab.

In addition to all this, Teams will allow upload document from OneDrive for business in the event that a signature request has been made, from the ‘Approvals’ section. Thanks to this option, said document can be accessed from anywhere and on any device.

There are also news when it comes to search message history. Teams will display the full thread of conversation when users click on the message search results.

Microsoft has also sought to improve the Teams experience when making video calls with several participants who are in the same room. In this way, once the platform determines that point of view matches of different attendees to a videoconference, it will optimize the interface to show only those who are remote, as well as a general shot of the rest of the people who occupy the same room.

Finally, Microsoft has announced the availability of a new Teams certified device, Poly G5700, containing a modular system than to connect multiple cameras and microphones, making it easy to use the platform in large meeting rooms with Teams for Android.

The company has stressed that it is still rolling out these updates, so they may not be found on all accounts in the program yet.