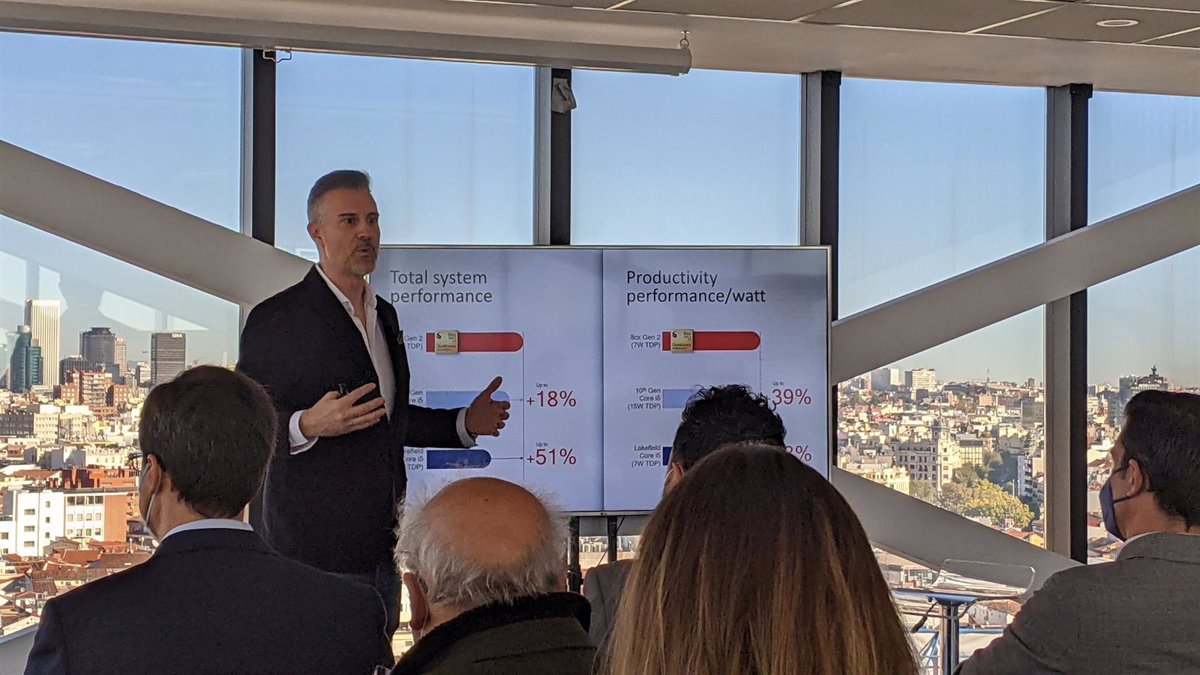 The Qualcomm computer processors They are now moving towards their fifth generation, at a time when the company assures that this product category is experiencing a “fantastic moment” both in its mass adoption and in the ecosystem of partners it has managed to create.

This has been stated by the general director of Qualcomm Spain, Douglas Vaz Benítez, in a meeting with the press, where the latest computer developments were discussed, focused on equipment based on Qualcomm processors, which meet the needs of the sectors education, consumption and business.

The manager has indicated that the company is “very happy” for “the attraction that the category is beginning to have in Spain”, where a ChromeOS computer with its chip has become the best-selling of the Chromebook family.

The changes experienced last year with the outbreak of the pandemic led companies and consumers to turn to technology to maintain continuity with work and studies, also promoting remote healthcare and digital entertainment.

“We have compressed and accelerated” digital transformation, has assured the director of Sales in Qualcomm EMEA, Carlos Fernández Pilo. But the increase in the use of technology has also led to technical problems related to working remotely, such as audio failures or screens that freeze during video conferences. In other cases, the problems were related to the unreliability of the WiFi network.

From Qualcomm they assure that they can offer “a better experience”, and for this they have opted for processors for computers, for a specific category: connected laptops (‘always-on’), which include a SIM card With which to connect to a network from anywhere and at any time.

These teams, as explained by Fernández Pilo, led by the latest addition, Snapdragon 8cx Gen2 5G, share a series of characteristics: they are thin, light, use passive cooling and lack fans. In other words, “they are not limited by architecture”, but rather present “a unique form factor”. And they have adopted technologies such as 4G or 5G connectivity and long-lasting batteries with a USB-C connector.

Computers powered by Qualcomm chips seek “a balance between autonomy and productivity,” said the Sales Director, and referred to a comparison between a team with Qualcomm’s Snapdragon 8cx 5G chip and another equivalent from the competition for demonstrate that, for example, after seven hours of use, the laptop with its chip still maintains 27 percent autonomy, when the other has already used it up.

A separate example, Fernández Pilo has highlighted that these are teams that fit different profiles, not only educational or business, and that there are models with Windows 10 (with the ability to upgrade to Windows 11) and with Chrome OS. Some also offer up to 16 hours of autonomy.

ALLIANCE WITH GOOGLE AND TELEFÓNICA

Qualcomm has found an ally in Google and Chromebooks that work with Chrome OS, which in 2020 became “the second most used operating system in the world”, as indicated by the head of the Chrome OS business at Google Spain, Emilie Engel.

The board has defended the Snapdragon 7c chip as a quality and competitively priced LTE proposition, and has advanced the evolution of these laptops, which allow a rapid adoption to web and cloud technology, facilitating mobility and offering various modes of use during the day.

The processor manufacturer also maintains a alliance with Telefónica, a company that is once again betting on devices, insofar as they are “a need for customers” -who have an average of 5 or 6 connected devices- and “a loyalty element”, as Daniel Hernández Ortega, vice president of the division, has expressed. of Telefónica IoT devices and consumption.

The operator has a “bet very strong“for the segment of connected laptops, in which they will improve the offer with 5G, the eSIM card, security and multi-device rates.