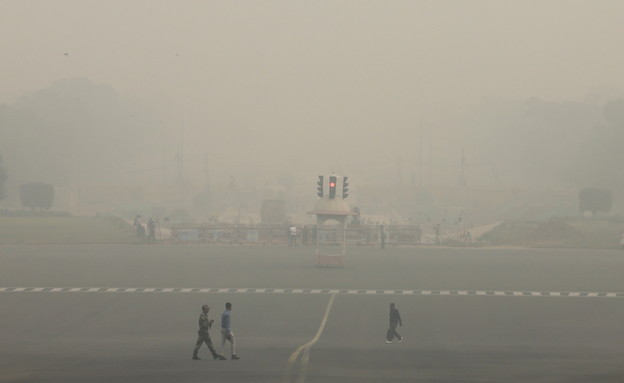 The capital of India is known as one of the most polluted in the world but this week air quality seems to have reached an even more extreme level • Delhi authorities have announced that schools and other institutions will be closed for fear of student health • Air pollution monitoring company: “Low air quality significantly harms residents’ health”

Health risk: The Indian capital has been suffering from unusual and severe air pollution in recent days, which has led the municipality to take an extreme step of closing schools and construction sites in order to reduce the health damage. The pollution has reached a dangerous level to breathe and the state Supreme Court has asked the government to formulate an emergency plan to deal with the dangerous situation.

“According to our data, air pollution levels in major cities in India, such as New Delhi and Mubai are very high. The air quality is so low that it significantly harms the health of residents in those areas,” explains Ran Corber, co-founder and CEO of BreezoMeter, a technology developer For monitoring air pollution and fires. “According to many studies and Harvard study details, exposure to high air pollution increases the risk of suffering from more severe corona symptoms and therefore the condition can be assumed not to improve with morbidity and high mortality.”

Regional Governor Erwind Kajerival said the administration was considering a total closure in the capital and the court described the situation as “very serious”. Air quality in Delhi, often ranked as the most polluted capital in the world, has deteriorated following crop fires, transportation emissions, out-of-town coal plants and other industries, as well as garbage burning.

The Air Quality Index (AQI) in and around the city has worsened to 470-499 out of 500, according to the country’s Federal Pollution Control Board. Such a level of pollution means that the air will also affect healthy people and especially dangerous for those with respiratory diseases. “For a week, from Monday onwards, schools will be closed but will continue distance learning so that children will not have to breathe polluted air. Construction activities have also been banned,” Kajerival said.

Ren Corber adds: “One of the dominant pollutants in India is 2.5 PM – respiratory particles smaller than 2.5 microns. These particles pose a significant risk. They can enter the bloodstream and accelerate a wide range of diseases, including lung disease and even increase the risk of various cancers.”

Government ministries will also move to work from home, while private ministries will be advised to do so for a week to reduce the number of polluting vehicles on the road. “We had to wear masks at home as well, the situation is very serious,” Chief Justice Ramna said. The court is hearing an argument filed by a student due to the aggravation of air quality. Ramana said the government should consider a two-day closure to protect citizens and inform the court in the next day of possible emergency measures to improve air quality.