Christmas Island: Millions of crabs have taken over the island: “Migration this year is absolutely amazing” 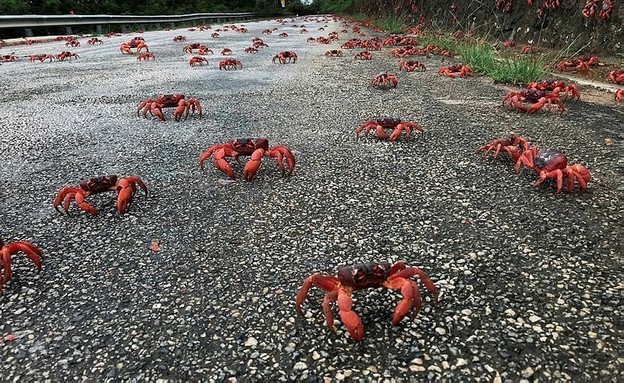 The annual migration: Australia-controlled Christmas Island has been flooded in recent days with millions of red crabs coming to it as every year around November. Roads on the small island of eight 1,500 residents were partially closed due to the crab takeover. The island’s natural resources manager: “The migration this year is absolutely amazing”

The island of Christmas is home to an estimated 43 million red crabs that migrate to the sea each year to reproduce. The unique phenomenon does not occur anywhere else in the world on such a scale and in general apart from the small islands of Australia similar crabs can also be found in the Cocos Islands in the Indian Ocean. “The drivers had to rake the crabs off the road and that caused traffic jams,” the director of natural resources said.

Once they have finished breeding, the females will wait two weeks in the burrows in the sea area until they lay eggs while the males return to the forests. Each female can lay up to 100,000 eggs of the red cancer protected by law in Australia.

In the past, millions more crabs lived on Christmas Island, but due to the yellow ant’s invasion, their number has decreased by about 15 million in recent years. Red cancer is considered an omnivore, meaning it feeds on both carrion but also leaves, flowers and human waste.

One thought on “Christmas Island: Millions of crabs have taken over the island: “Migration this year is absolutely amazing””