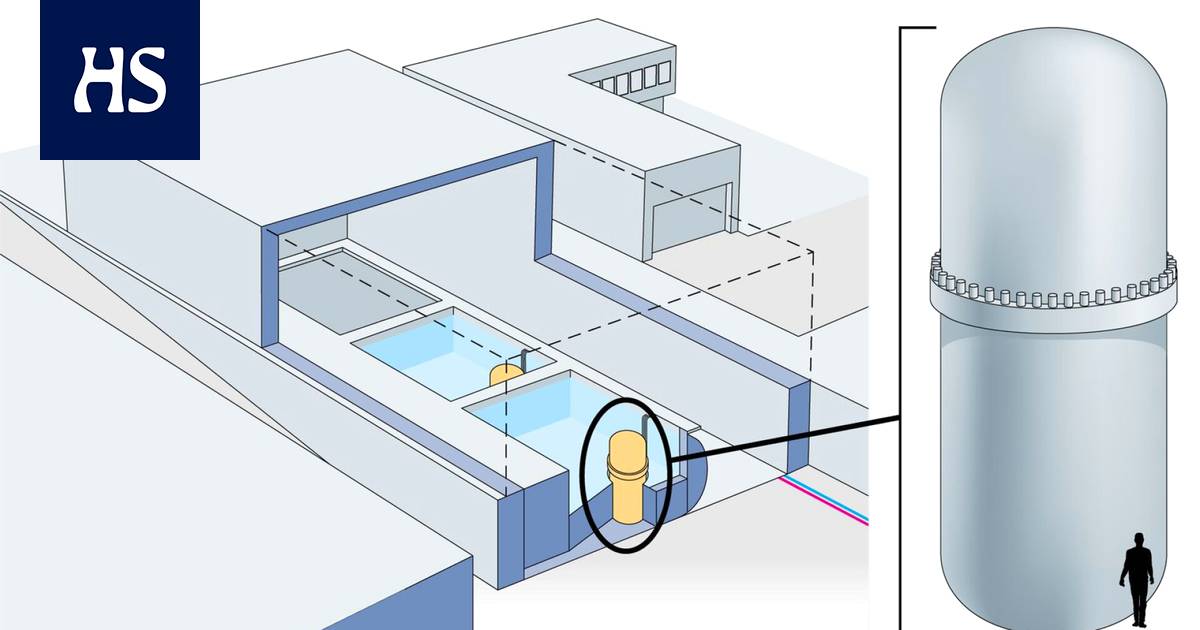 A lot smaller and clearly simpler.

That, in a nutshell, is the idea of ​​a new type of nuclear power plant that produces district heat. One that the Technology Research Center VTT hopes to build in Finland in just seven years.

Last week it was reported that a small Finnish town is being planned as the location for the power plant. Depending on the location and the number of reactor modules, it could produce district heating for around 20,000–80,000 people.

The first facility was supposed to be a demonstration facility, which would however operate on commercial terms. Based on that, it would be easy to build more similar power plants both in Finland and abroad.

Vain a seven-year timeline may sound ambitious. Especially when it is compared to, for example, the Olkiluoto triple reactor, the construction of which has been in principle for more than 20 years.

“The biggest questions are related to zoning and permit matters. Technically, I don’t think the schedule is a problem.”

This is due to the nature of the district heating plant. Unlike Olkiluoto, which utilizes the latest technology, the new small nuclear power plant is more stripped down compared to the previous ones.

Planned a district heating power plant can be described simply as a water heater.

Its reactor unit is roughly the size of an upright bus and is filled with water.

The reactor’s energy production is based on the same chain reaction maintained by neutrons as in traditional nuclear power plants.

At the bottom there are fuel rods consisting of enriched uranium, whose nuclear reaction is controlled by rods that prevent the passage of neutrons. This technology has more than 60 years of experience.

The power of the reaction is about 50 megawatts. For comparison, for example, the thermal output of Olkiluoto 3 is 4,300 megawatts in full operation. The power of one reactor module is therefore a good hundredth of a large reactor.

Fifty however, the power of a megawatt is enough to heat the water in the tank to about 150 degrees.

The hot water rises up in the tank. However, due to the pressure, the water remains liquid and does not vaporize.

Hot water is directed from the reactor chamber to the heat exchanger, where it heats the water in the district heating pipeline.

One reactor module would be enough to produce district heating for the needs of around 10,000–20,000 people.

However, the internal circulation of the power plant is closed, so the water in the reactor does not end up in the district heating network.

It won’t stop even if there is a power outage at the power plant.

Heat after changing, the water cools down. The cool water flows back to the bottom of the reactor to be reheated.

Heat-based circulation does not need external energy or pumps. So it won’t stop even if there is a power cut at the power plant. Instead, the transfer of heat to the district heating network requires electricity, but when the electricity goes out, the cycle simply stops.

Reactor works with one fuel charge for about two years, after which a third of the fuel bundles are replaced with fresh ones.

For this purpose, the facility would have a fuel exchange machine, which processes fuel rods as in large power plants.

Used nuclear fuel should be stored in the same way as in other power plants today, first in cooling pools and finally in disposal sites. Waste is produced from a small reactor in roughly the same proportion as from a larger one. It could be processed in existing facilities.

Otherwise like nuclear power plants in general, a district heating plant would therefore not produce any electricity at all.

Thus, it does not need turbines or other power generation systems. As a whole, the facility is quite simple.

Its security arrangements are mostly passive as well. The reactor is supposed to be immersed in a large pool of water.

There are two reasons for this. First of all, water is a good radiation shield. It stops the neutrons and gamma radiation produced in a nuclear reaction. Normally, there is no radiation at all on the surface of the water pool. Already at a distance of about a meter from the reactor, the level of gamma radiation has significantly decreased.

In addition, the water acts as a cooling heat sink if the water in the reactor starts to get too hot due to a fault.

When the reactor is operating normally, a protection zone of around one meter is sufficient around it.

Even in the worst accident, i.e. when the reactor core melts, a safety zone of about 200 meters in each direction is sufficient, Nyman estimates.

“In the worst accident situation, the radioactive release would be about two percent compared to a large reactor like Olkiluoto 3.”

Quite such a facility could still not be placed in the basement of an apartment building.

In practice, a suitable place would be a fenced area like an industrial area. The building required for one reactor would be a hall twenty meters wide and long.

In practice, it could be wise to build several reactors in the same space. For example, four reactors would need a space about 70–100 meters long, which would resemble an industrial building.

Since the plant would be simple, its cost would not be huge either. Nyman would estimate that two reactor modules, i.e. a 100 megawatt power plant, would cost around 100–150 million euros.

Operating costs would be cheap, even so cheap that it probably wouldn’t be worth running the power plant down even in the summer, even if heat wasn’t really needed,

Location however, it is worth considering carefully.

“There is always loss in the transfer of heat in the district heating network. The closer the power plant is to the users, the more efficient it would be.”

Current legislation does not allow this. The safety regulations for nuclear power plants are written with large power plants in mind, which is why kilometers of protective areas are required around them.

“In this regard, the legislation should be changed to take into account the special features of new small reactors. Research reactors of a similar size have been built right in the center of cities around the world.”

Staff a small power plant would initially need the same roles as a larger power plant, maybe around 10–15 people. They would work in shifts to ensure that everything works as planned.

In the longer term, however, Nyman envisions that several power plants could be monitored from one remote control room. This would mean that the facility could, in principle, even be completely unmanned during its use.

How security would then be arranged? How could an abandoned power plant be protected against terrorism?

“Guarding is its own question, which still needs to be considered,” Nyman replies.

However, the power plant can be turned into a bunker-like space where access is not easy. Reactors dug underground cannot be reached, for example, by crashing into them with an airplane or a car.”