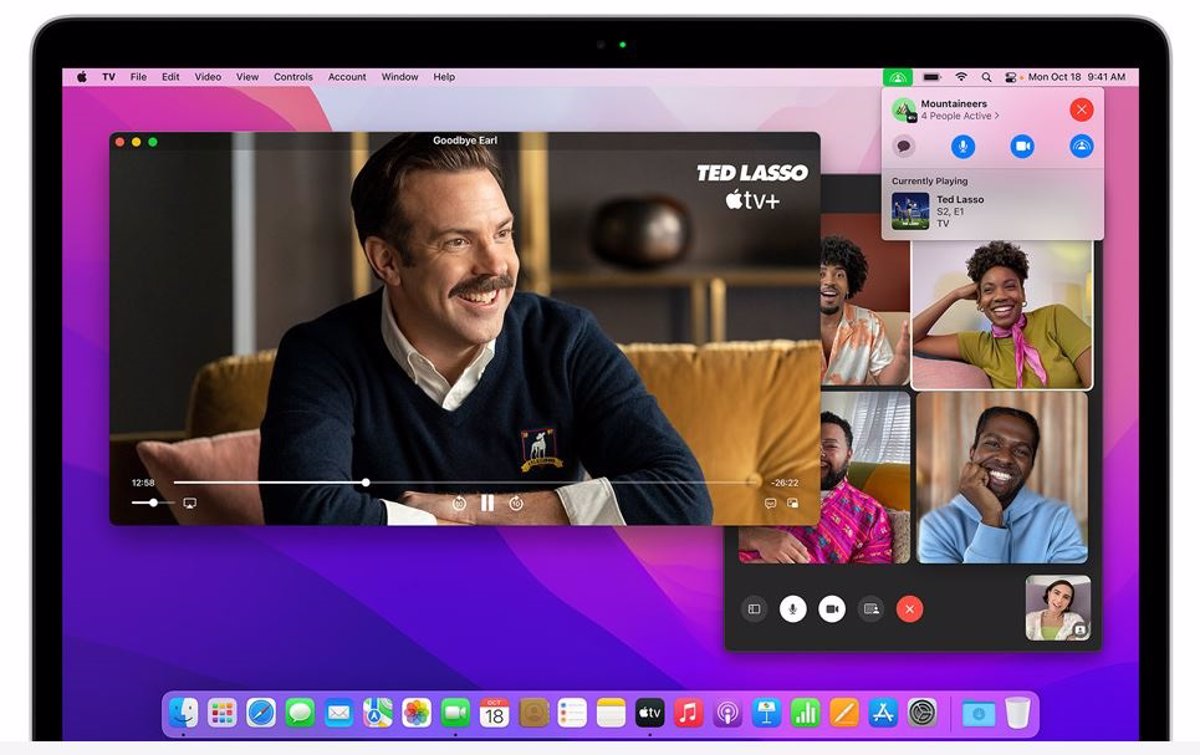 Apple has released the latest version of its operating system for computers macOS Monterey 12.1, which includes the SharePlay application to continue talking on FaceTime while viewing content synchronously, but has again delayed the Universal Control function.

As can be seen on their website, one of the main features of this macOS Monterey update is SharePlay. With this application, users can watch series or movies as well like listening to music or sharing screen while talking on FaceTime.

In addition to being able to view and listen to synchronously, this application allows you to share playback controls. In this way, users who participate in that conversation can pause a video and it will stop on all devices, as well as add songs to playlists.

SharePlay is also capable of automatically adjusting the volume to promote a smooth sharing experience, so that when one of the parties speaks, the volume of the video or song is reduced and returns to its initial level the moment the conversation ends.

This application supports spatial audio, so that each voice sounds as if it came from where that person occupies on the screen and includes effects for the microphone. It allows isolate her voice from ambient noises or musicAlthough if the user wants to give the same prominence to the background sounds, they can integrate them into the video call.

It also offers a grid display, showing all call participants in squares of the same size and automatically highlighting the speaker through a gray frame that surrounds the image. Along with this framework, the application offers a video effect inspired by the Portrait mode of the iPhone.

Apple has announced that, in addition to Apple users, FaceTime links can be sent to those who use Android and Windows devices via Chrome o Edge as long as they have a subscription with the application. To send video, support for H.264 video encoding is required.

To access a certain conversation, it is only necessary to generate a link and share it with a group, either by message, e-mail or WhatsApp. This can be included as an event in Calendar so that all attendees know the day and time of the video call.

In conjunction with the release of SharePlay on macOS Monterey, Apple has announced that Universal Control feature will be delayed until Q2 2022, and from the web they announce that it will be “Available this spring”.

Universal control It was presented last June at the annual Apple Worldwide Developers Conference (WWDC) 2021 developer event, but its launch has been delayed during these months. It was expected to ship with macOS Monterey in October.

It is a tool that allows you to control different devices wirelessly. Thus, you can move an item between an iMac, a MacBook Pro or an iPad in multitasking mode and control everything with the same mouse and keyboard without the need to change and use the accessories assigned to each device.

Other novelties in the new version of macOS are presented in the Safari browser, which unifies search tabs, are unified in the smart search field and adopt the color of the pages that are being visited.

These groups of tabs can be given a specific name and can be dragged to send them to the body of an email. Also, these tabs are synced across all Apple devices, making them easy to find.

Concentration Modes have also been implemented with this update, in which you can select the notifications you want to receive or block them to avoid interruptions. These they also update automatically with the rest of Apple devices when activated and a standard reply can be chosen for contacts who wish to notify the user of something.

The AirPlay content exchange application is another one that includes new features with this version of macOS Monterey. It can now be used to send content to the Mac from an iPhone, iPad, or another Mac and mirror the screen or enlarge it to screen mode secondary with compatible applications, such as Keynote or Photos.

With this update of the operating system, other functions related to live text, map system, privacy, accessibility, sticky notes, messages, podcasts, voice notes or reminders have been renewed.