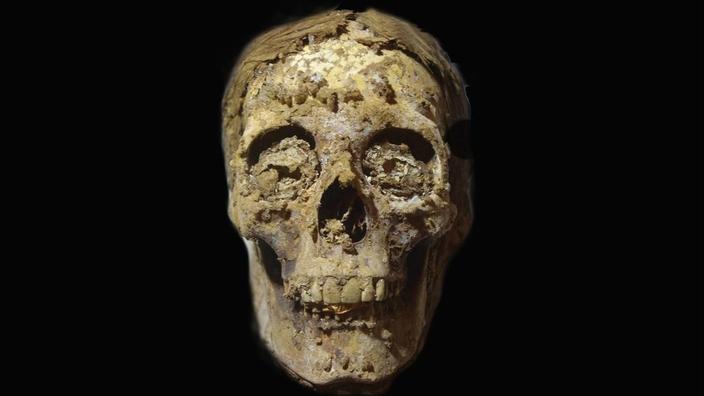 ARCHEOLOGY – Dated from Roman times, three burials have provided researchers with new specimens of golden amulets, in vogue in the last centuries of ancient Egypt.

In golden silence, they had spoken the language of the dead for centuries. Discovered this fall, three ancient Egyptians buried in Roman times contained, in the secrecy of their jaws, small tongue-shaped amulets covered with gold leaf, the Egyptian Ministry of Tourism and Antiquities announced on December 5. Small treasures which were not intended to highlight the oratorical talents of the deceased but, on the contrary, to ensure that they do not find themselves speechless in the hereafter.

These precious funerary remains were found by a Spanish archaeological mission completed on December 10. Led by the former Near East Institute of the University of Barcelona, ​​the objective of the excavation was to study the various burial sites of the ancient city of Oxyrhynchus, on the site of which the city stands. modern Al-Bahnasa, some 170 kilometers south of Cairo. The three golden amulets are not the first to have resurfaced there, far from it. “It was about a ritual of protection of the dead quite characteristic of the Roman necropolis of Oxyrhynchus, since fourteen of these golden tongues have been found to this day”, said the archaeologists Maite Mascort and Esther Pons on December 6, in a press release from the University of Barcelona.

Like the Greeks, who placed an obolus in the mouths of their deceased to pay Charon, the nocher of the dead, some Egyptians sometimes slipped tongue-shaped amulets between the teeth of the deceased to ensure the continuity of the faculty of talk about these travelers who left for the domain of Osiris. It would be a kind of amulet that appeared late in Egyptian culture. Discovered west of Alexandria at the beginning of the year, several mummies also provided with golden tongues, also dated from the Roman period of Egypt, the beginning of which is traditionally set at the annexation of the kingdom in 30 BCE.

As impressive as they are, the golden tongues of Oxyrhynchus are not, however, the most fertile discoveries of the last excavation campaign carried out by the Spanish team. Among the most notable finds, researchers have unearthed since November five Byzantine crypts as well as three Roman tombs whose deceased were wrapped in polychrome cardboard boxes. Above all, archaeologists also got their hands on two sarcophagus tombs dated from the XXVIe dynasty. Corresponding to the so-called Saite period, from VIIe au VIe century BC AD, they are contemporary with the last indigenous Egyptian kings to have reigned over the country, before the Persian conquest and the successive domination of the Hellenistic then Roman rulers.

Better still, if one of these two tombs was opened and looted in Antiquity, the same fate was spared at the second tomb. Unsealed by Egyptologists, the room contained tombs of funerary remains. The buried individual, undoubtedly a man according to the decoration of his sarcophagus, was consequently bathed in an ocean of earthenware ornaments as well as the most diverse amulets: Djed pillar, eyes of Horus, scarabs, figurine of Horus, … The picture was completed by the presence of the four canopic jars, containing the viscera of the mummy. Without forgetting the presence of a modest procession of 399 ouchebtis, small statuettes representing the funeral servants of the deceased.

A beautiful discovery that promises to deepen knowledge of the most ancient ages of the site, long before the accumulation of more recent Roman remains. “The closed and sealed tomb of the Saite period displays an architectural structure different from the rest of what has been found so far on the site, thus specified Maite Mascort and Esther Pons. Moreover, as it is intact, it will allow us to learn more about the funeral rituals of this chronological period in Oxyrhynchus. ” A golden find, in short, better suited to fuel future discussions in Egyptian circles than one-on-one with Osiris.