The Man’s Riddle from Nesher – Ramla: The Mysterious Fossil Discovered in Israel – and Controversial Among Scientists 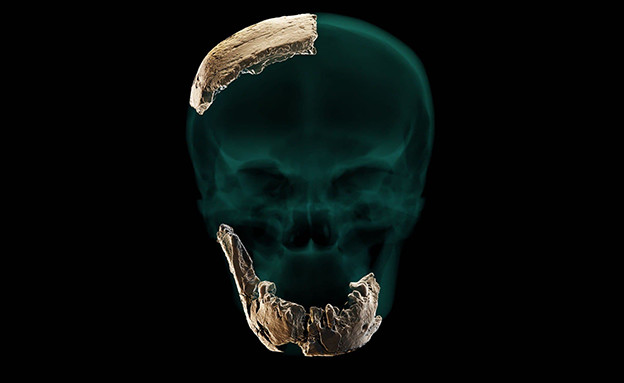 About six months ago, researchers from Tel Aviv University reported finding a fossil, which they believe represents a new type of ancient man, unknown to science.

In June of this year, a news item was published about an extraordinary discovery: fossils of an ancient man were found in excavations in the area of ​​the Nesher factory near Ramla. They included part of a skull and part of a lower jaw, in which one whole tooth remained. Next to them were numerous flint tools as well as animal bones that bore cutting marks. The finds were dated to about 120,000 years before our time.

Prof. Israel Hershkovitz, Dr. Hila May and Dr. Rachel Sarig, all from the Dan David Center for the Study of Human History and the Shmonis Institute of Anthropology at Tel Aviv University, led the research on fossils. Together with colleagues from Israel and around the world, they performed three-dimensional scans of parts of the skull and jaw, and compared them to human fossils from our species, Homo sapiens, and other species, such as Neanderthals and Homo erectus. Thus they came to the conclusion that the Man Manshar was different from both these and these: although he had characteristics of Neanderthals, but also those that were more suited to our species, or to other groups.

The researchers hypothesized that the man belonged to an ancient population, which appeared 400,000 years ago and lived in the Middle East and southern Europe. It is possible, they added, that from this population evolved the Neanderthals, “our cousins” who lived in Europe and Asia until about 40,000 years ago. They did not classify the fossil as a separate species in the human family, but called it “the morphological type of the Ramla eagle.”

As is often the case in science, even when the discovery was first published, not everyone was quick to accept the researchers’ conclusions. Fossilist Philip Rightmire told the journal Nature that the skull appears to belong to “early Neanderthals, which appear rather archaic,” meaning that it has features that characterize the earlier Neanderthals, but is still Neanderthal. Others have argued that the fossil is too close to our day to represent the population from which the Neanderthals evolved.

A much more detailed review came earlier this month, in the form of an article in the journal Science that presented a different analysis of the fossils. This analysis led the researchers who made it to the conclusion that the fossil is “simply Neanderthal”, and nothing more. This critique comes straight from home: the article is signed by Prof. Yoel Rak, from the Department of Anatomy and Anthropology at the Tel Aviv University School of Medicine, and Dr. Assaf Marom from the Department of Anatomy at the Technion’s Faculty of Medicine.

Only Merom focused on the jaw bone, comparing it to twenty Neanderthal bones, to 141 Homo sapiens bones and also to one Homo erectus bone, an earlier species in the human family. “Our analysis provides evidence that the Nesher-Ramla fossil should be simply classified as a normal Neanderthal,” they concluded their article.

“Neanderthals are very unique, if I find a tooth I know it is Neanderthal,” he added only in an interview with Haaretz. “The chewing system they found in Ramla is very typical and can be easily shown in some measurements […] it is Neanderthal and only Neanderthal.”

“The complexity was not taken into account”
Hershkovitz and his colleagues did not leave the claims unanswered. In the same issue of Science they published their response, in which they detailed the failures that fell, in their opinion, in an article by Rak and Merom. Among them were the focus on the jaw while almost completely ignoring the cranial crisis that accompanies it, the use of a small number of anatomical features of the jaw, only six, as a basis for comparison, and more. But the main argument of Hershkovitz and his colleagues is that only Merom looks at the findings from a binary point of view: either the fossil belongs to the Neanderthals, or to our species, Homo sapiens. “The resolution of our research is much higher,” Hershkovitz told Haaretz. “The possibility of having populations that do not belong to any of the groups is considered.”

There is no doubt, the researchers write in their response, that Adam Nesher Ramla was indeed close to the Neanderthals, and shared with them some of his features. But only Merom “interpreted their findings conservatively, without taking into account all the existing data, and especially the complexity of human history.”

So who exactly was, in the end, that person from Nesher Ramla? What population did he belong to, and how close was he to the Neanderthals? We do not have the tools to answer that. As in other scientific controversies, the scientific community will ultimately judge, whether with the help of further discoveries from the area or an analysis of existing findings.