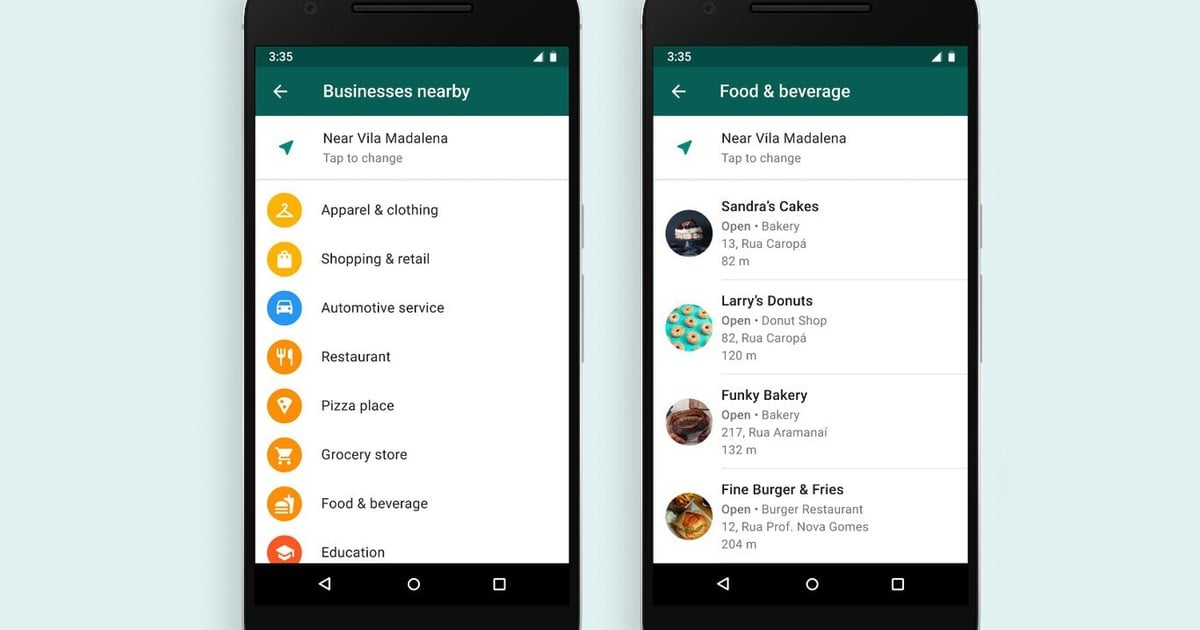 WhatsApp continues to add new features to its service. After testing the sending of cryptocurrencies, the world’s most used messaging platform is now testing a new function to find restaurants and other nearby businesses, an idea taken from Google Maps but with the difference that they can be write privately for inquiries or reservations.

This luck of business directory location-based testing was started in São Paulo, Brazil. As explained by the specialized media WABetaInfo, is expected to reach all users sometime in 2022.

The new search function will be called “Businesses Nearby”, and the interface was already leaked. In the search field, in addition to finding files, photos or links, it also a section of “nearby businesses” filtered by location will be added.

Apparently the function will allow sort between restaurants, supermarkets, clothing stores and others. Once the type of store has been chosen, WhatsApp will show a list of the businesses around us to be able to write to them and make the pertinent queries.

Will Cathcart, director of WhatsApp, explained in his Twitter profile that “(this system) has been created privately: We do not record your location or the businesses you seeIn other words, Meta (Facebook) assures that it will not know which locations we have contacted.

The fact of showing the nearby stores is a step of WhatsApp to start rival other apps that also allow you to find business based on location, as is the case of Google Maps, Foursquare or TripAdvisor, among others.

WhatsApp, the most used messaging platform in the world. Photo: EFE

With 2022 about to start, the instant messaging application has informed its users that allow group chat administrators to delete messages they deem appropriate regardless of who sent them on Android devices.

According WABetaInfo, the application is launching a new update through the beta program of Google Play, which will give this control capacity to the administrators of group chats.

Thanks to this new feature, which will only be available with the WhatsApp beta update for Android 2.22.1.7Administrators will be able to moderate and control the content that is shared in these groups, as well as decide what they want to keep in them.

Every time they delete a message, all members of that group will receive a notice within the chat itself and it will appear where the deleted message was before. This will indicate which administrator – in the event that there are several administrators in the group – has been in charge of deleting it.

The administrators of the WhatsApp groups will have the power to delete any message from these chats without the need for the rest of the participants to give their consent to proceed with the deletion.

For the moment, the implementation date of this option is unknownSince this portal does not mention when this update will arrive on devices with Android operating system, much less with Apple iOS.