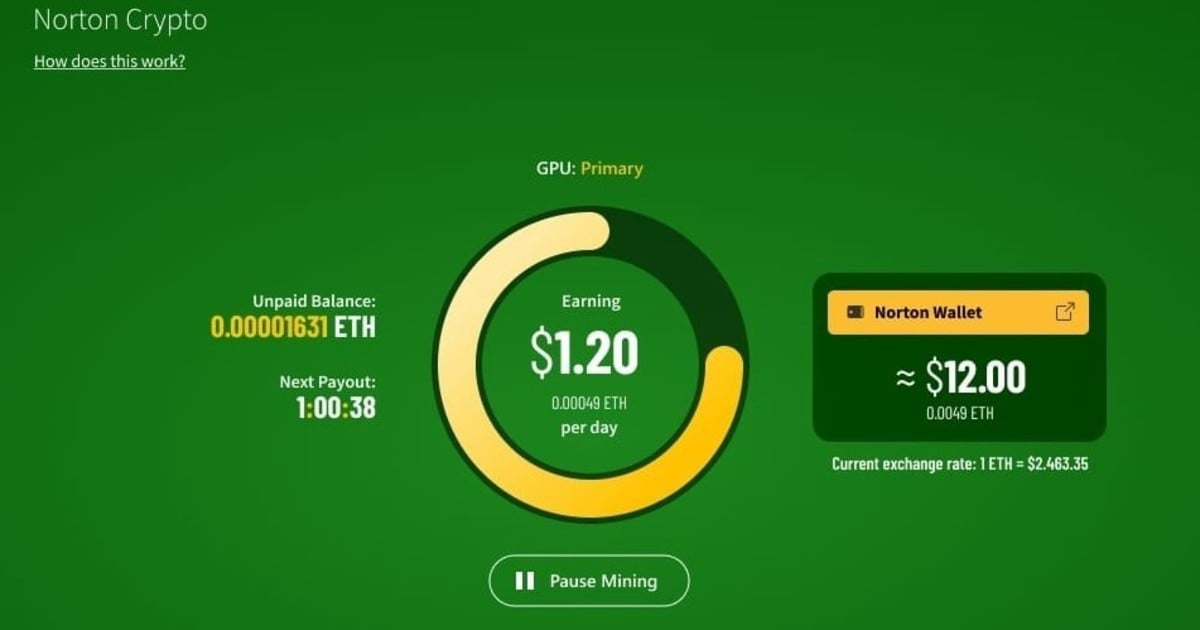 “Norton Crypto”. This is the name of the program that one of the best known and most used antivirus in the world secretly installs to put our team to mine cryptocurrencies and stay with a commission from the profit.

In the middle of last year, the company had announced that it would be adding the feature. True to form, it was presented as “a way to help customers improve their cybersecurity by allowing them to mine cryptocurrencies without having to rely on unencrypted code on their machines. that it could be stealing their profits or even planting ransomware. “

Norton Crypto comes with the Norton 360 package, which costs between $ 30 and $ 100 per year according to the plan. Its function is to mine cryptocurrencies when you are not using the computer, losing a commission. That is, in part, the user would be mining for Norton.

For now it is only used to mine Ethereum and although the company says that it is an optional function that the user has to activate to start mining the cryptocurrency, there are users who report that the miner is installed and used even if you do not activate it. This is something that many installers do: secretly hide programs without our paying attention.

The problem is that in addition, as reported by several users, it is impossible to uninstall unless the NCrypt.exe program is deleted with administrator permissions, and it may still fail.

What commission does Norton charge?

Norton installs a mining program without the user wanting it. Photo Norton

it also takes care of everything for you, they claim to create a secure digital wallet for each user and “the key to the wallet is encrypted and stored in securely in the cloud. “

Currently the commission for mining is 15% of what corresponds to the miner, to that you can add any other fee associated with transactions and transfers.

Norton 360 users, at least according to the posts that are filling the official community forum, do not seem to be very happy with the idea. There are multiple complaints from people who believe that including a cryptocurrency miner in an antivirus is a terrible idea, when one of its goals is literally detect this type of software as malicious.

In addition, problems with the amount mined were also reported, either because they disappear or are reduced in front of them, crashes of other mobile applications, blue screens, portfolios that do not open, inability to withdraw Ethereum, and other issues.

There’s another problem: Norton Crypto only supports transferring the Ethereum you mine from a Coinbase digital wallet. That is, we are “locked” in the “wallet” (wallet) that they propose, even if we have another ourselves in another service.

Norton, of course, defended himself. “Norton Crypto is an optional function, if you want you can use it and if not”. For Norton the difference between them and other miners is that theirs “is safe and reliable” and Norton 360 will continue to detect malicious cryptominers as usual. Ironically, there are other antivirus detecting Norton Crypto as a threat.

Undoubtedly, a stain on a program that historically served to defend us from external threats.