All the news that the Las Vegas fair left for gamers 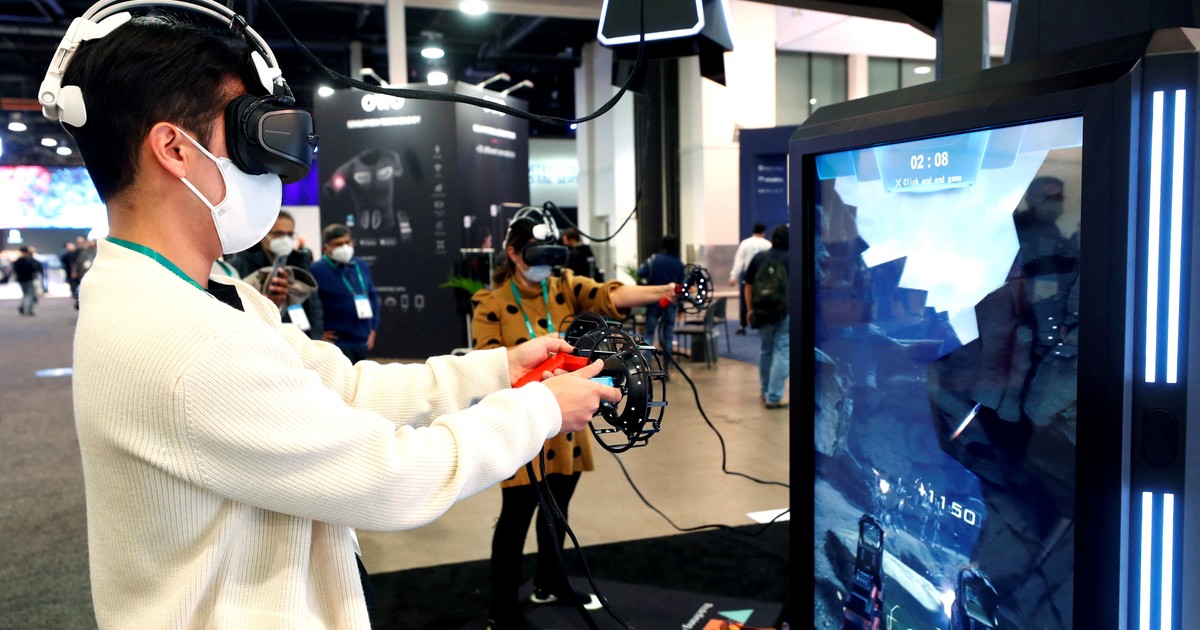 The traditional technology and consumer fair CES 2022 (Consumer Electronic Show), which takes place every January in Las Vegas, closed the recent edition this Friday with technological innovations for video game lovers, both on next-generation consoles and on PC .

As in every edition, the main players in the gaming industry -Sony, Samsung, Acer, ASUS, Razer, AMD and NVIDIA- did not want to miss the return of the face-to-face meeting to show their products on video cards (GPU), monitors, laptops and headphones for those gamers looking for experiences at competitive levels.

One of the companies that surprised at CES was the Japanese Sony, which announced the first details of the new generation of its virtual reality devices, PlayStation VR2, which include a renewed viewfinder and two controllers, called Sense Controller, one of them equipped with its haptic technology.

The Sense controls of the PlayStation VR 2 virtual reality headset.

The devices, developed for the PlayStation 5 (PS5), seek to provide “a greater sense of presence” of the player to allow them to interact “in a much more visceral way,” explained, when introducing them, the senior vice president of planning and management of platforms. Sony, Hideaki Nishino.

Apparently this second-generation VR headset promises to have unique vibrational feedback and advanced haptic controllers, along with eye-tracking, a 110-degree field of view, and fovea rendering, a technology that focuses only where the fovea of ​​the eye is looking to maximize resolution, getting more graphics with fewer pixels.

Nvidia climbed one more notch in the race for power. In a digital presentation at the 2022 edition of CES, he presented the RTX 3090 Ti, a video card that surpasses what was until now the most powerful on the market. In addition, he announced the RTX 3080 Ti and 3070 Ti for laptops and, in the economic entry of its current generation, the RTX 3050.

Desktop users who need more power, be it for gaming at high resolutions or heavy rendering work, will be able to make the leap (if they feel like it) to the 3090 Ti, with 40 Shader TFLOPS, 78 RT-TFLOP, 320 Tensor -TFLOP and 24 GB of G6X 21 Gbps memory.

3080 Ti, the new board from Nvidia. Photo Nvidia

What is interesting for emerging markets such as Argentina is the appearance of the RTX 3050, which according to Nvidia can run the latest games at more than 60 frames per second, of course, without as much graphical detail as its older sisters can.

Nvidia also presented its portable versions, with the RTX 3080 Ti, which comes with 16GB of GDDR6 RAM and is supposedly more powerful than the desktop Titan RTX GPU. In fact, the company claimed that these chips can run games at 1440p at 120 frames per second or more.

In order not to be less than its eternal rival, the multinational AMD revealed the new video cards at the Las Vegas meeting RX6000M Series, which will accompany the new gaming laptops that the firm will enhance with its processors. The GPU are manufactured in a 6nm process, with a consumption of 25 watts and have 14% faster memories.

However, the main novelty was a new top-of-the-range GPU graphics card: the RX 6850M XT, which has a 165W TGP, 12GB GDDR6 and 18Gbps memory speed along with 96MB of Infinity Cache.

One earbud with 300-hour battery

The Hyperx company was once again present, as usual, at the annual meeting in Las Vegas with new peripherals and headphones for those gamers who prioritize the competitive aspect of playing video games.

In this sense, wireless headphones HyperX Cloud Alpha They stood out from the rest of the ads, as it is the first of the line to offer up to 300 hours of battery life on a single charge.

The Next Generation Gamer Computers

The fastest laptops in the world for gamers and creators were also part of the Las Vegas technology fair at the hands of leading companies in the sector such as Razer with various models: the Razer Blade 14, Razer Blade 15 and Razer Blade 17, are now equipped with the recently announced GPUs NVIDIA GeForce RTX Serie 30 for notebooks, up to an RTX 3080 Ti.

The new updates also include the innovative DDR5 memory, which provides impressive clock speeds of up to 4800 MHz and cutting-edge advancements in processors from both AMD and Intel.

Meanwhile, ASUS with its gamer division ROG (Republic of Gamer) returned to the fray with a renewed version of WNW Two 16. It is its flagship among dual-screen gaming laptops, helping pave the way to fresh and exciting computing experiences.

Recognized in the Gaming and Hardware & Components categories CES 2022 Innovation Awards, the new Zephyrus Duo 16 2022 with ROG ScreenPad Plus comes with an AMD Ryzen R9 6980HX CPU and a GPU for laptops. NVIDIA GeForce RTX 3080 Ti with a MUX switch.

Another competitor in the field is the Taiwanese Acer, which announced new desktop computers of the Predator family, such as Orion. 3000 y Orion 5000.

The new Predator Orion 5000 gaming desktop features up to a 12th Gen Intel Core i7 processor, paired with the latest Intel H670 chipset, up to an NVIDIA GeForce RTX 3080 GPU and 64GB of 4,000MHz DDR 5 memory for hardcore gamers.

Both the Orion 3000 and Orion 5000 feature a bold new chassis that encapsulates their powerful components with tinted glass, plastic, metal, and mesh.

The Consumer Electronic Show (CES 2022) began with the first events just under 24 hours after officially opening its doors at the Las Vegas Convention Center. Over the course of the presentations, Samsung, TCL and Acer revealed their products that will hit the market sometime this year.

Samsung took advantage of the appointment to present the first of the monitors in the world that presents a 1000R curved 4K (3840 x 2160) display with 240Hz refresh rate and 1ms response time (GtG), the Odyssey Neo G8 32 ”is ready to open a new chapter in gaming monitor innovation, delivering crisp performance for even the most dedicated PC gamers.

Its performance matches its impressive image quality with Quantum Mini LEDs, Quantum HDR 2000 with a maximum brightness of 2000nit and a static contrast ratio of one million to one, which brings out the most subtle details for a greater construction and immersion of the world. .

The new Odyssey Neo G8 is projected in a design language similar to the Odyssey Neo G9, offering a sleek white exterior that stands out even when switched off. Beautiful colors leap from the screen into the user’s real environment with CoreSync lighting.

Center lighting on the back of the monitor automatically detects colors on the screen and projects them into real life to create a sense of deeper immersion.

TCL 144Hz Mini LED displays will benefit greatly from the faster reaction times and fluency, which will give players a significant advantage, especially in multiplayer games.

Acer He also showed his cards in this segment with the monitor Predator X32 y X32 FPS Carefully designed to balance the performance gamers expect with the visual brilliance creators need.

In particular, the model Predator X32 It takes advantage of the exceptional performance of NVIDIA G-SYNC ULTIMATE to deliver graphics with realistic HDR resolution and ultra-low latency, resulting in a better gaming experience.

While Predator X32 FPS It comes with an HDMI 2.1 port, which means that gamers can enjoy 4k games not only on PC but also on console. With a 165Hz refresh rate (overclock) and 1ms response time, it is the fastest 4K monitor available today.