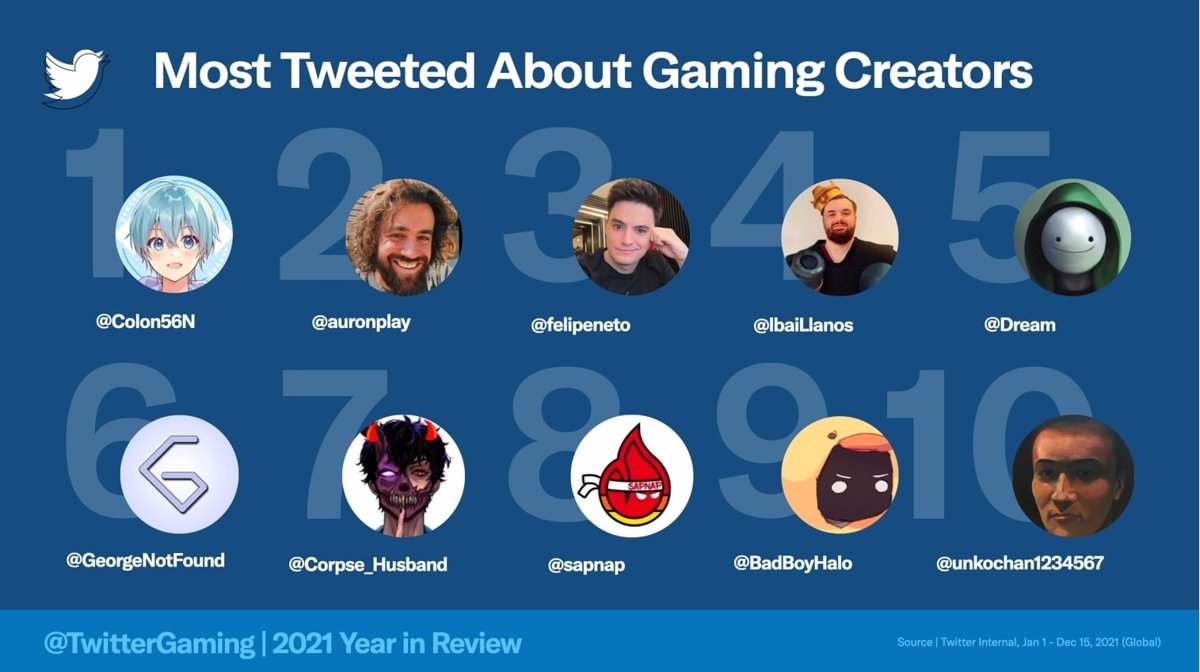 The content about video games has starred in the conversations on the social network Twitter during the past year 2021, when they were written 2.4 billion ‘tweets’ about ‘gaming’ globally, 14 percent more than the previous year.

Twitter has shared the figures of the video game content that was published on its platform in 2021, including game content creators, specialized media, streamers, teams and eSports players, as well as commentators and fans.

In 2021, there have been more than 2,400 million ‘tweets’ about ‘gaming’ globally, which represents an increase in conversation of 14 percent year-on-year and a volume ten times higher than in 2017.

In addition, the company has highlighted that the fourth quarter of 2021 all records were broken and he became the period of greatest conversation about the world of videogames of the story on Twitter.

Data from 2021 show that the Spanish-speaking gaming community has an increasing presence on Twitter, especially thanks to the content creators leading this conversation.

So much AuronPlay as Ibai Llanos They have topped some of the rankings of the conversation about video games within the platform worldwide, such as that of the most talked about ‘gaming’ creators, in which they occupy the first and second place, respectively.

What’s more, Ibai has also reached the first position in the rankings of creators of ‘gaming’ that more followers have gained (surpassing the American Dream and the Mexican Ari Gameplays) and in the highest number of video views (ahead of the French Gotaga and the Americans TimTheTatman and OpTic Scump).

Spaniards also stand out in other areas, such as the ranking of the most talked about ‘eSports’ athletes, where Mixwell, a professional Valorant player in the G2 team, is in the eighth position worldwide. The list of most talked about athletes is led by Mongraal, Bugha and Benjyfishy.

In global data, the Latin American gaming community continues to gain strength within Twitter and Brazil is the country that leads the conversation in the region. This country is among the five that most ‘tweet’ on this issue in the world and some of its creators and ‘eSports’ teams, such as Felipe Neto or paiN Gaming are at the top of some of the rankings.

Brazil is the only Ibero-American country that enters the list of those who most ‘tweet’ about video games, led by Japan. They are followed by the United States, South Korea and ThailandWhile Europe appears on the list via the UK and France, eighth and ninth, respectively.

The video game conversation on Twitter in 2021 had as Most talked about video game to Geshin Impact, followed by Apex Legends, while Ensemble Stars! complete the podium.

Other titles in the top 10 most talked about games were Final Fantasy (fourth), Animal Crossing: New Horizons (sixth), Minecraft (eighth) and Fortnite (tenth).

As for the most talked about ‘gaming’ events, the first position is occupied by E3 2021 in Los Angeles, the most important annual fair in the sector, and the presentation that Microsoft made, Xbox Games Showcase, was third.

The awards for the best video games of the year The Game Awards were the second most talked about event of the year, while Gamescom 2021, the event held in Cologne (Germany) that is considered the most important held in Europe, was fourth.

As for the ‘eSports’ teams, the team stands out especially Brazilian LOUD esports, first in the lists of the most commented and with the most followers won during 2021, while FaZe Clan was the team whose videos were most viewed.

The ‘eSports’ leagues have also had a presence in the Twitter conversation in 2021. The most commented ones were: CBLOL, Call of Duty League (which also had the highest number of video views), Valorant Champions Tour, Overwatch League, and League of Legends Championship Series. For its part, Fortnite Competitive Series was the league that got the most new followers in the year.