the Lollapalooza of video games that will arrive in Argentina 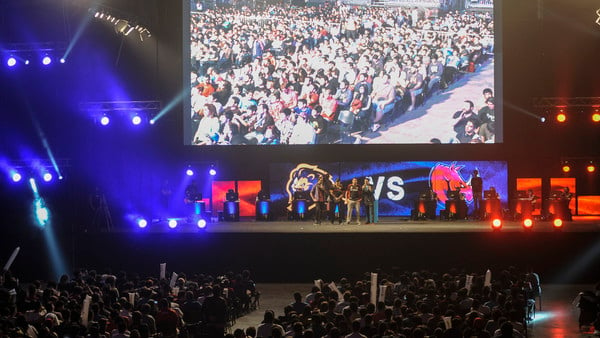 Latam GAMERGY Tour promoted as the “Lollapalooza of video games”, will bring its international event to the country in which it hopes to attract 23 thousand fans and enthusiasts of video games during three days that will take place in the large pavilions of Technopolis.

After its success in Spain, the popular gamer event lands in the region with the organization of GGTech Entertainment and IFEMA MADRID.

The Latin American tour will be held from April to August 2022 and will have 3 stops: Buenos Aires (Argentina) from April 15 to 17, Santiago de Chile from May 6 to 8 and Mexico City from August 26 to 28.

This festival put the spotlight on the region for the first time due to the great potential it brings to the video game industry and with high rates of viewers in each transmission that has esports as protagonists. According to official data, 70% of the public that usually watches the Spanish GAMERGY comes from Mexico, Argentina and Chile.

GAMERGY is here to stay

This esports and video game meeting is the most important gaming event in the Spanish-speaking world and one of the most historic in Europe. After 11 years of experience, the Gamergy Tour decided to undertake a new challenge: to conquer Argentina, Mexico and Chile its main markets in Latin America.

In our country, one with the greatest tradition in terms of gaming events, has in Argentina Game Show (AGS) its main reference for seven years. The idea of ​​the organizers is to give the community one more option for each beginning of the year and for the next five years.

Unlike AGS, the Spanish event has the attraction of bringing together the main players in the industry, such as Playstation, Electronic Arts, Ubisoft, Riot Games or the Chinese Garena that develops video games for mobile devices.

Each one will have various dedicated spaces throughout Tecnópolis so that attendees can compete in tournaments of Gran Turismo 7, Rainbow Six: Siege, FIFA 22, League of Legends o Free Fire.

In fact, the competitions that will take place during the weekend will be free with prior registration through an app that can be downloaded from the Google Play store and the App Store. And that’s not all, since they will have the official transmission exclusively through Flow.

The final of the Latin American League of the video game League of Legends could be played in Argentina as part of the Latam GAMERGY Tour. Photo: EFE.

“We are excited to bring this initiative for the first time to a region as promising for the gaming world as Latin America. It will be a face-to-face experience that all video game fans can enjoy. We are sure that this is just beginning”, said César Roses, CEO of GGTech Entertainment Latin America.

In addition, in Flow GAMERGY, gamers and fans will be able to share experiences with some of the most recognized national and international influencers. So far they have already been confirmed: Punicher, Luz Gaming, Yair17, Focus, Brenda García, Hectorino, Antronixx, Magui Sunshine, Xavy Becker and Silvia Gómez.

On the other hand, the organizers and Riot Games -owner of League of Legends- have a special announcement for the Technopolis event prepared for this Thursday. Although the official confirmation remains, Argentina will have a regional final again for the championship of the popular video game after five years.

Where to get tickets

Pre-sale for Flow GAMERGY can only be obtained through the official website of the event. For access, different types of tickets are enabled, depending on the day on which the public wants to attend and the activities that take place on that date. Prices are between 1,000 and 5,000 pesos.

From March 7 to 20, users of Ualá will be able to access pre-sale with a differential price, and from March 20 to a 20% discount.

Those passionate who want to live the premium experience can buy the GAMERGY Pack that includes VIP access, official merchandising and preferential access.

During the three days of the event, those attending Flow GAMERGY will be able to enjoy a gamer’s paradise. All kinds of activities and experiences related to video games and esports will be organized: final phases of the competitions that will be held online in the weeks prior to the event, blitz tournaments of the best-known games of the moment, as well as other news that will be announced in the coming weeks.