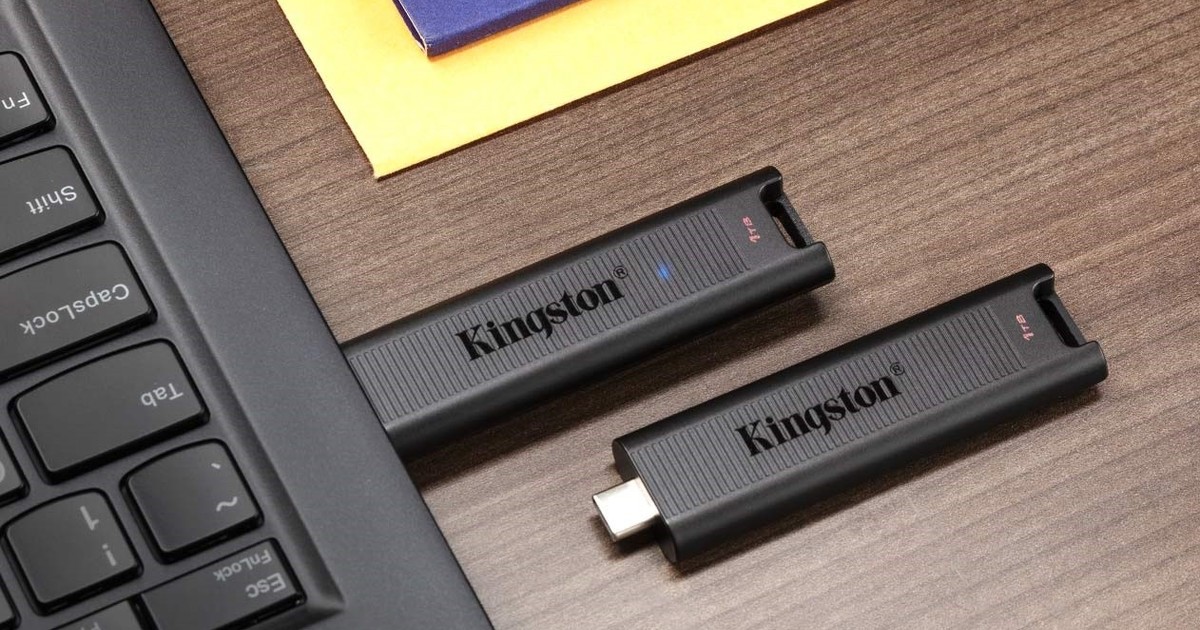 Away from the glory and success they experienced ten years ago, the new USB flash drives high perfomance They offer speeds of up to 20 gigabytes per second (Gbps), the ability to store encrypted files, and use these drives as an external SSD. On this note, five super powerful models that are already available in the country.

In an era where the predominance of online storage (Google Drive, OneDrive or iCloud) is absolute, it has been shown that betting all the chips on the cloud is not always a wise decision, since its access It depends on an optimal connection.

This difficulty is more evident when one needs to handle large files (exceeding 20 Gigabytes), archive sensitive information that requires a degree of military security, or simply needs to have it always at hand.

The 512 GB USB 3.2 memory sticks -the maximum capacity is one Terabyte- that make up this guide are: Kingston’s DataTraveler Max, Patriot Supersonic Rage Prime, SanDisk Ultra Fit, Verbatim Fingerprint Secure and Acer UP300. They all offer a 5-year warranty.

Unlike traditional models, where the only difference was the “gigs” it could accumulate, these flash drives achieve different response speeds, some as high, that outperform an internal solid state drive.

A condition that qualifies them to host 4K video, compile discs in lossless audio format, run applications from the drive or even install an operating system to boot from this drive.

top speeds are determined by the USB standard that comes on the motherboard of the notebook or computer. To take advantage of these pendrives, the minimum is to have a USB 3.0 port, which is recognized by its blue color and achieves a 5 Gbps mark.

With the intention of increasing the transfer capacity, the USB-IF, the consortium that integrates the leaders of the technology industry, approved subdivisions 3.1 and 3.2, which raise the original speed knob up to double it.

And while USB 3.2 is the latest generation of the USB specification, as if to narrow the doors of the maze, three more variants were added. The one designated as USB 3.2 Gen 2X2, which is the latest, it reaches 20Gbps and is only compatible with the USB Type-C port.

In this sense, the Kingston pendrive is a USB 3.2 Gen2, considered one of the fastest on the market. achieves 1,000 Mbytes per second in read mode and a 900 MB/s for sequential writing. It links to tablets, mobiles via the USB Type-C connector and supports copying or transferring of music and images.

“To achieve maximum memory acceleration, the port where it is attached must have the same designation, such as USB-C. If it is lower, the speed will be determined by this receiver. Which implies that it will not be possible to take advantage of all its speed, ”warns José Luis Fernández, technology manager at Kingston.

To amplify the levels of confusion, some modern notebooks such as the Asus Vivobook S or the MacBook Pro have abandoned the classic USB ports of type A and B, to adopt USB-C, used by most modern cell phones. It stands out for being small, reversible and achieving a high transfer rate.

In turn, this port has different variables, such as 2.0, 3.1, USB-C 3.1 second generation or SS-10 and the recent 3.2. Thus, there are cables and flash drives compatible with traditional USB and with the new plugs, but with much higher speeds.

Patriot’s drive is USB 3.2 Gen 2 type and has a read speed of 600 Megabytes per second. It is encased in an aluminum casing that provides better heat dissipation. It is 18,000 pesos.

“It incorporates a thermal sensor to monitor device temperature for excellent durability and stability. It is ideal for complex data transfers and even allows you to run applications from the unit itself”, says Marcela Gorini, Patriot’s LATAM director.

The sharp increase in speed is due to the number of lanes used by each device to transport information. While traditional USBs employ a single lane, the cabling for USB Type-C was designed to support multiple channels, ensuring scalable performance.

One of the possible uses of these external memories is to expand the capacity of some notebooks that have reached the limit. Instead of having to open the cover to add an SSD diskone of the ports can be used permanently.

To respond to this demand, the SanDisk device is committed to a reduced volume, which barely protrudes from the port. It is the closest thing to the typical Bluetooth adapter that usually accompany wireless mice or keyboards.

If someone needs to store confidential information, it would not be logical to use cloud services. Instead, there are some USB devices that include an encryption algorithm in their hardware.

One of the safest in the world is the AES-256 block cipher (Advanced Encryption Standard) since it can have 2 raised to 256 unique combinations. Which implies that your password can contain 78 digits.

Another of its secrets is how this 256-bit encryption structures the information. Instead of using a sequential order, organizes it into 128-bit matrix blocks with 4 rows and 4 columns. His method is so efficient that the Tianhe-2 supercomputer would have to try combinations for 5 years to transcribe the key.

The Verbatim flash drive comes with a 256-bit AES encryption hardware module. This device allows access to stored information only with fingerprint unlocking. It includes an application to manage the number of users and manage data entry.

The unit does not store passwords on the computer or in volatile system memory. That is why it is much safer than using software encryption. If it falls into the wrong hands, it deletes all data after multiple incorrect password attempts. It is the only 128 GB. It costs 7,799 pesos.

To put an end to the confusion that these nominations represent, it is expected that USB4 will unify criteria. Will allow data transfer speeds up to 40GBps, it will be compatible with Intel’s Thunderbolt 3 and will use only the USB-C connector.

Being high-capacity, it will allow you to daisy chain devices with a USB-C port, even if they are a combination of external displays and data-driven devices, such as external storage.

BIWIN’s memory achieves its peak performance when connected to a USB 3.2 Gen 1 port. Under these conditions, it achieves a maximum speed of 120 MB/s for sequential reading and between 30 and 100 MB/s for writing. It costs $7,600.