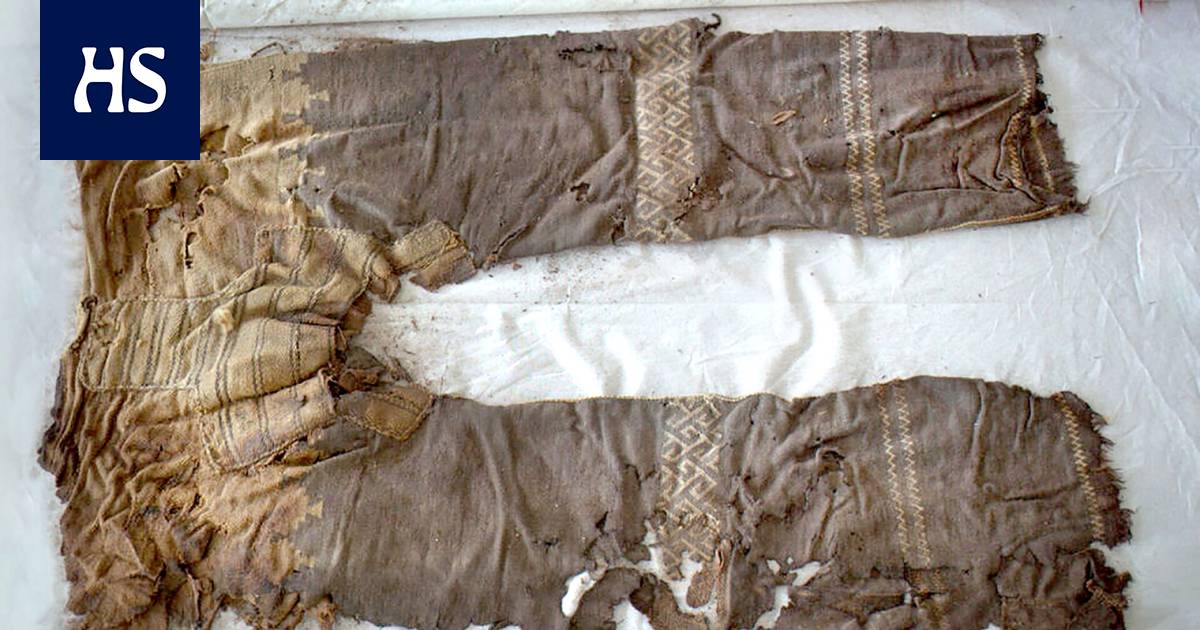 The patterned pants were made for riders. Contemporary pants, such as jeans, are made and patterned in the same way.

Riders and shepherds buried their loved ones in northwest China with their clothes thousands of years ago.

They lived in the Yanghai area. In one of the graves in the area, a 2014 mummified man was found with tattered pants on his leg.

He was probably a warrior, because a battle ax, for example, had been placed in the grave.

The radiocarbon timing revealed the pants to be the oldest trouser-like garment known to mankind so far. The pants range in age from 3,200 to 3,300 years.

Archaeologists, clothing fashion scientists, historians, chemists and conservators have studied these pants further over the years.

The trousers combine many weaving techniques and decorative patterns. The decorators had been influenced by them from all over Eurasia.

The influences came to China, for example, with nomads and merchants. The pants thus also tell the story of how textile-related inventions spread in Asia.

Later, the routes created a network of roads and routes in Central Asia, which became known as the Silk Road or Silk.

The same textile manufacturing techniques are still used in trousers – in jeans, for example.

The researchers report their findings tiedejulkaisussa Archaeological Research in Asia.

Researchers say the pants are Turfan’s man’s pants. The site is located in Yanghai, China, about 43 kilometers southeast of Turfan City.

At that time, women and men generally wore mainly cloaks and skirts. Researchers believe that double-legged pants were especially needed for riding.

If you rode a horse without a saddle in the suit of a Turfan man, his legs and pants were pressed tightly around the horse. So the pants might have had a purpose when riding long distances or having to go to war.

The researchers found no trace of the fabrics being cut. They believe the pants were made to the knight’s measurements.

The pants were woven and patterned by technicians with brown and light wool alternating at the tops of the legs (left). Stripes of the same color were patterned at the branch. Geometric patterns are woven at the knees, and a zigzag pattern at the ankles (right). Picture: ., M. WAGNER ET AL / ARCHAEOLOGICAL RESEARCH IN ASIA 2022

German researcher at the Institute of Archeology Mayke Wagnerin the group recorded that the pants were processed using different weaving techniques. Wagner is from the German Archaeological Institute in Berlin.

The most common technique used in weaving trousers is dossier. The twill weave is one of the basic weaves of woven fabrics. It is a major invention in the history of textiles.

An oblique line is formed on the surface of the fabric at an angle of 45 degrees. It makes the fabric durable.

The trousers made their time in knee braces as well tapestry. It was used to produce a thicker fabric from wool to the knee bends.

A method that produced a denser fabric was also used for the waistband.

As shepherds in China moved in different areas according to the seasons, they inevitably saw different techniques in the manufacture of clothing as well.

“The eastern parts of Central Asia were like a laboratory. There, people, plants, animals, knowledge and experiences from different directions came, went and changed, ”says Wagner. In Science News.

When the trousers were re-woven after the study, the wool of the trousers was again obtained from coarse sheep, as it was thousands of years ago.

A version made in the 2020s of Turfan’s man’s clothing and especially the pants. With the poncho and pants, the rider wore a woven belt. The rider’s socks stayed on the leg with the help of shin straps. Picture: Mayke Wagner, M. WAGNER ET AL / ARCHAEOLOGICAL RESEARCH IN ASIA 2022

These re-woven pants could be put on their feet these days, and maybe no one would pay much attention to them in a street scene – at most someone might admire the patterns on the pants.

Today, jeans are still made with elastic band bindings. So today’s practical pants aren’t very different from pants more than 3,000 years ago.

Archeology Wagner’s group has no information on the kind of looms Turfan’s man’s trousers used to weave.

No remains have been found in devices like this. The new version of the pants was born with one of the modern looms.

The researchers believe that the loom-guided loom would have helped make the pants.

Next, scientists plan to make and experiment with different looms how these oldest pants in mankind can be made.