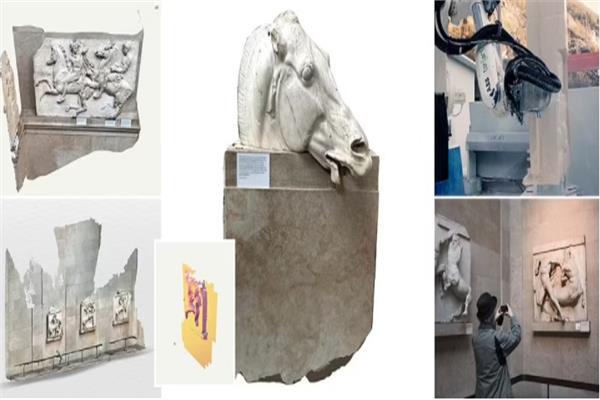 Digital archaeologists have scanned the 2,500-year-old Parthenon marble, Greek sculptures and statues inside the British Museum – in the hope of creating ‘perfect’ replicas that could one day lead to the originals being brought back to Greece.

The researchers took the detailed 3D images surreptitiously after the museum refused an official request, and they used technology built into the latest camera phones and iPads to scan half a dozen of the sculptures, also known as “Elgin Marbles”, so that the files could be used to program a “robot sculptor” to carve. Replicas.

Experts from the Oxford-based Institute of Digital Archeology (IDA) hope that the marble blocks will be created using metal chisels, in the same way the sculptures were created by the ancient Greek engineer Phidias around 447-438 BC.

The balls once formed part of the Parthenon on the Acropolis in Athens, but were stripped and shipped to Britain when Lord Elgin appeared in Greece in the early 1800s.

Roger Michel, CEO of ISA, surveyed the sculptures after security personnel ignored them, telling the Daily Mail: “I think the museum has been reluctant to give us formal permission because they don’t want to be seen as complicit in this project.”

He added that ISL hopes to make the replicas in about three months — the same time it took a robotic sculptor to recreate the destroyed Arch of Triumph in Palmyra, Syria, which was unveiled in London’s Trafalgar Square in 2016.

Michel said that the Lord Elgin marble will be created in much finer detail from the Palmyra arch, down to the millimeter.

He described the robot as “like something from the first Terminator movie,” adding that the “exceptional” precision of its carving “would be as good as anything a human sculptor could do.”

Michel thinks the museum would have a hard time arguing against returning the originals to Greece if his team succeeded in making highly accurate replicas.

“The originals were actually brightly colored, even glowing, so these ancient statues were actually skewed,” Michel said. “They are old white sculptures that don’t reflect what the sculptor intended.”

He continued: “We hope the replicas will give the British Museum an opportunity to display the marbles in an honest, exciting and more educational way, perhaps even alongside augmented reality and virtual reality to improve the viewer’s experience.

Michel and his colleague Dr. Alexy Karenowska, ISA’s technical director, used a combination of Lidar and photogrammetry to create the 3D scans.

Lidar, which was recently added to Apple’s iPhones, uses laser light to create a three-dimensional representation by measuring distances to a fraction of a millimeter, while photogrammetry works by taking a number of individual images and linking them together.

These copies will be used to program a “robot sculptor” to carve new statues from the same blocks of Pentelic marble that Phidias and his collaborators used nearly 2,500 years ago.