WhatsApp has expanded the options available for voice messages which can now be played outside of chat in the background and view the draft before sending.

Every day an average of 7,000 million voice messages are sent in the messaging application, a data that WhatsApp has shared on the occasion of the new functions that it has incorporated to “make the experience even better”.

Specifically, and as reported in a statement, WhatsApp already allows you to listen to audio notes in the background, out of chat where they have been sent, allowing other tasks to be carried out, such as replying to other messages.

The recording also incorporates novelties, such as the possibility of pause it and continue it again o de listen to the voice message before sending it, as a draft.

It has also been incorporated an audio wave with which you can visually follow the representation of the sound in the recording, and in case of pausing playback, it can be resumed later at the point where it was cut off.

These news, although announced this Wednesday, will begin to reach users In the next weeks, as the company has pointed out. 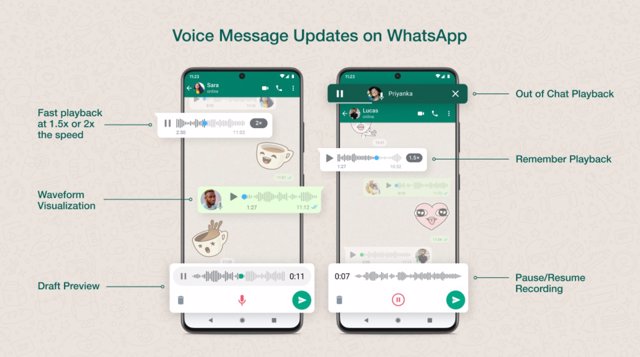