Scientists create a magnetic sticky material that has unique capabilities 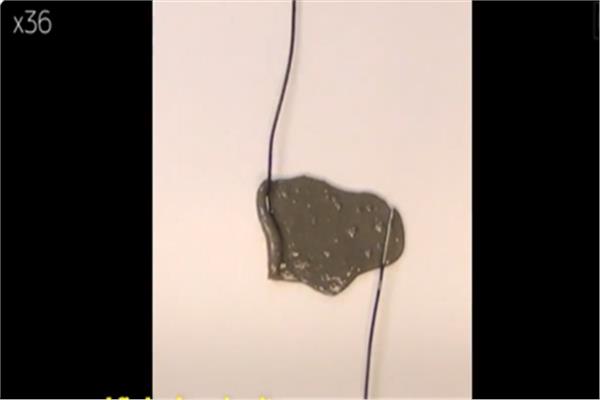 Scientists have created a magnetic sticky substance that looks disgusting but is actually quite amazing, if not frightening.

Hong Kong scientists have created state-of-the-art technology from “robot viscous” that can be magnetically manipulated to retrieve inadvertently ingested objects, among countless other real-world applications.

Li Zhang, one of the creators of the sticky robot (goo-bot) from the Chinese University of Hong Kong, told the British newspaper “The Guardian” that the ultimate goal is for scientists to be able to use it. as a robot.

Reportedly, Zhang and his team made this revolutionary innovation by mixing a polymer called polyvinyl alcohol (the first ingredient to even be magnetically controlled) with household borax detergent powder and magnet particles, then coating the toxic magnetic particles with silica to make them virtually safe for use inside the human body.

This product has “viscoelastic properties”, which means that it behaves like a liquid or a solid depending on the level of force applied.

There are currently no robots inside the sticky structure, but scientists say they are able to control this magnetic object thanks to the neodymium magnet particles placed inside.

This allows scientists to extend it in different directions, allowing it to move through very narrow spaces.

The magnetic particles inside this viscous structure also allow it to encircle and encapsulate various objects in the form of C or O, picking them up and moving them, and its inventors say it is also capable of conducting electricity.

In fact, the robot’s capabilities seemed so far-fetched that social media pioneers thought it was an “April Fool” when it first appeared on April 1, the Guardian reported.

A stunning video shows the goo pulling wires together, traveling in passages as narrow as 1.5 mm and behaving like mercury from a broken thermometer.

Scientists believe this slime ball could boast a range of basic applications, such as “moving harmful objects” and “switching and repairing circuits,” according to the study.

Perhaps most importantly, perhaps, it is likely to accidentally extract non-food items that people ingest, an important function given the frequent cases of people ingesting dangerous foreign objects, from needles to car keys.

The sticky substance generated mixed reactions on social media, with one saying it was “a bit scary”.
Others described it as an evil Trojan horse that could be used to implant devices under the guise of invasive surgery.

Fortunately, as several Twitter users have pointed out, the sticky ball is not conscious (it’s not smart, it’s just a sticky substance controlled by a magnet).