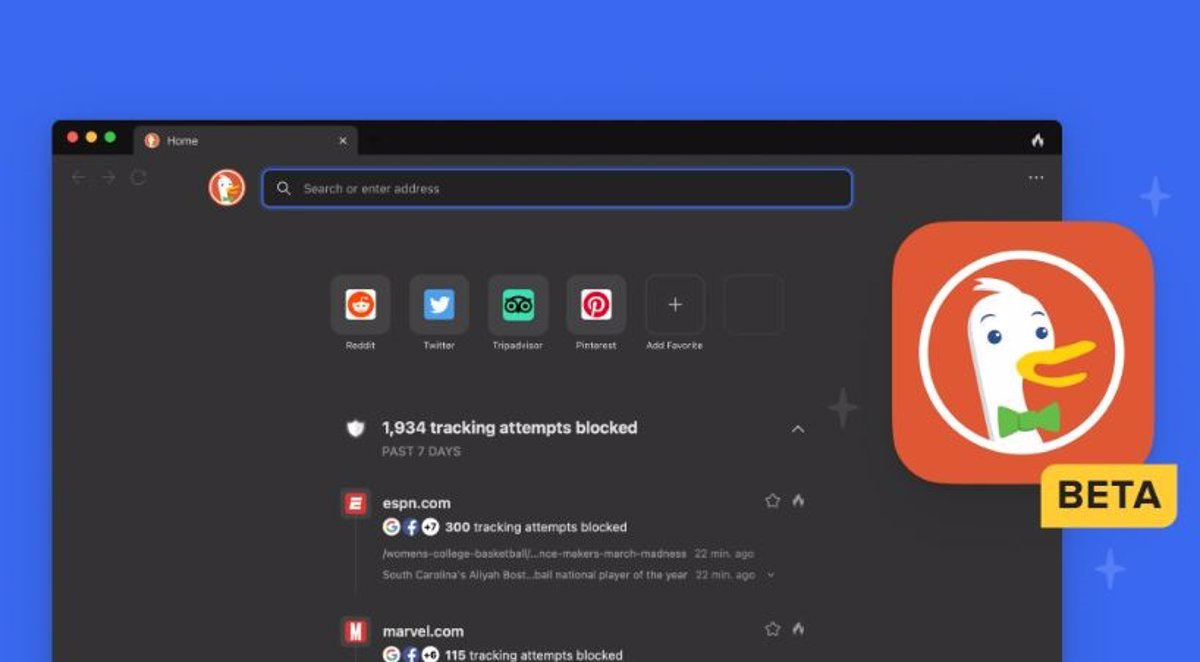 DuckDuckGo has launched its own browser for Apple Mac desktops and laptops, claiming to deliver 60 percent faster surfing speed than Chrome while using 60 percent less data.

DuckDuckGo is a search engine alternative to Google and Bing that focuses on providing users with the highest level of privacy possible by not collecting personal information to tailor their searches.

According to the company, its mobile application, which was introduced in 2018, has had over 150 million downloads from customers, who have also stated that the experience of “privacy simplified” for their PCs, as described in a statement.

As a result, it has chosen to create a privacy solution for Mac computers in order to provide basic private browsing without specific configurations, which will be rolled out to Windows PCs later, but no precise timeframe has been set.

This is a beta version of the new DuckDuckGo browser for Mac, which is currently unavailable in the App Store and is only available to a select group of users who must sign up for a waiting list to use it.

The fact that it’s a private beta already implies that the experience is “still changing” and in the testing stage, however it does have several features that could make it into the final version, such as the removal of external extensions.

Tab or password managers, bookmarks, and ad blockers are among them. DuckDuckGo intends to integrate them into its own browser first.

The statement added, “We implemented these capabilities right into our app, which offers privacy, security, speed, and simplicity benefits.”

In relation to Privacy, a key aspect of the search engine that made it famous, the firm has emphasized its commitment to user security through tools like its tracker blocker, DuckDuckBot, or a built-in safe search engine.

It has also stated that it has implemented a new pop-up cookie protection technology on about 50% of websites, a number that has increased with this beta version.

It has also insured that consumers will have speedier navigation as a result of this blocking technology, which is faster than Chrome because it uses roughly 60% less data.

However, the company has stated that its encryption system Smarter Encryption, which has a built-in search engine, allows customers to browse more frequently in the HTTPS encrypted version. This, together with tracker blocking, decreases the risk of third-party scripts gaining access to user data.

“We structured our product such that in-app data like history, bookmarks, and passwords are stored by default only locally on the device, and DuckDuckGo cannot access them,” according to the business.

WHY IS DUCKDUCKGO FOR MAC DIFFERENT?

DuckDuckGo has also discussed what sets your browser apart from others, and you’ve emphasized that it’s not just about how it looks, but also about how it’s designed.

As a result, he has described the two sections of a typical browser. On the one side, there’s a rendering engine that transforms web code into the websites you visit, and then there’s the interface itself, which includes bookmarks, tabs, settings, and so on.

That way, you may simply use a Mac operating system API to create your own code from the ground up, focusing on privacy, security, and simplicity.

“This means we don’t have the leftovers and clutter that have built up in browsers over the years, both in code and design, allowing us to have a new look and feel and deliver greater speed,” explains in this article.

The firm has stated that it intends to open source your Mac software after the testing phase, similar to how it did with iOS and Android for their mobile versions, and that it will do so with Windows as well.

DuckDuckGo is currently only supporting these two operating systems, though they have stated that they would “love” to include Linux in the future.