After Elon Musk’s acquisition of “Twitter”, he wants to change the platform 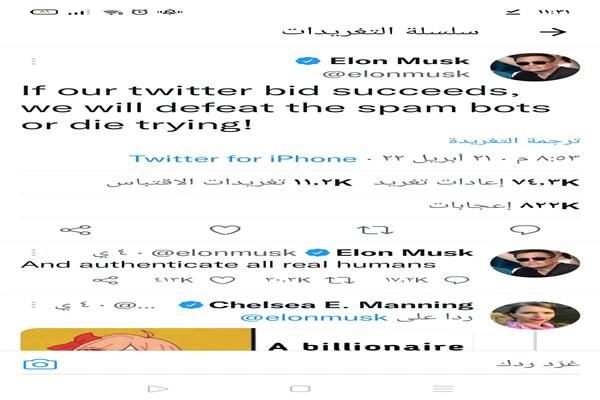 Twitter Inc. announced today that it has entered into a definitive agreement to be acquired by billionaire Elon Musk, for $54.20 per share in cash, in a transaction valued at approximately $44 billion in cash.

Axios posted what Musk wants to change on Twitter as follows:

He commented on a long tweet in April 2022, saying, “The quickest thing I got out of this narrative is that Twitter is way too late for long tweets!”

It is noteworthy that Twitter has a maximum number of characters of 280, after the company had increased this number from 140 characters in 2017.

Musk once described spam bots as the “single most annoying problem” on Twitter, the method used by automated “spam” senders.

He tweeted in April 2022: “If our Twitter bid works, we’ll defeat the spam bots or we’ll die trying.”

In a 2019 tweet, Musk noted the social media platform’s lack of an edit button for “when you really need it.”

And at TED2022 in April 2022, he said he wanted Twitter to have an “edit” button, where he believed problems raised by critics could be resolved.

In April 2022, Musk also polled his followers about whether they wanted an edit button, and about 74% of the more than 4.4 million respondents voted yes.

It should be noted that Twitter confirmed after the survey that it was working on an edit button, pointing out that it did not get the idea from the survey.

Musk expressed concern about the bias inherent in Twitter’s algorithm, which he said he would solve using an open source algorithm.

He tweeted in late March 2022, “I’m concerned about actual bias in the Twitter algorithm having a huge impact on public discourse. How do we know what’s really going on?”

He also surveyed his followers to see if they support an open source algorithm, and about 83% of the more than 1.1 million respondents confirmed that they would.