In a FIFA 22 event for half a million dollars, Krü Esports hopes to make history 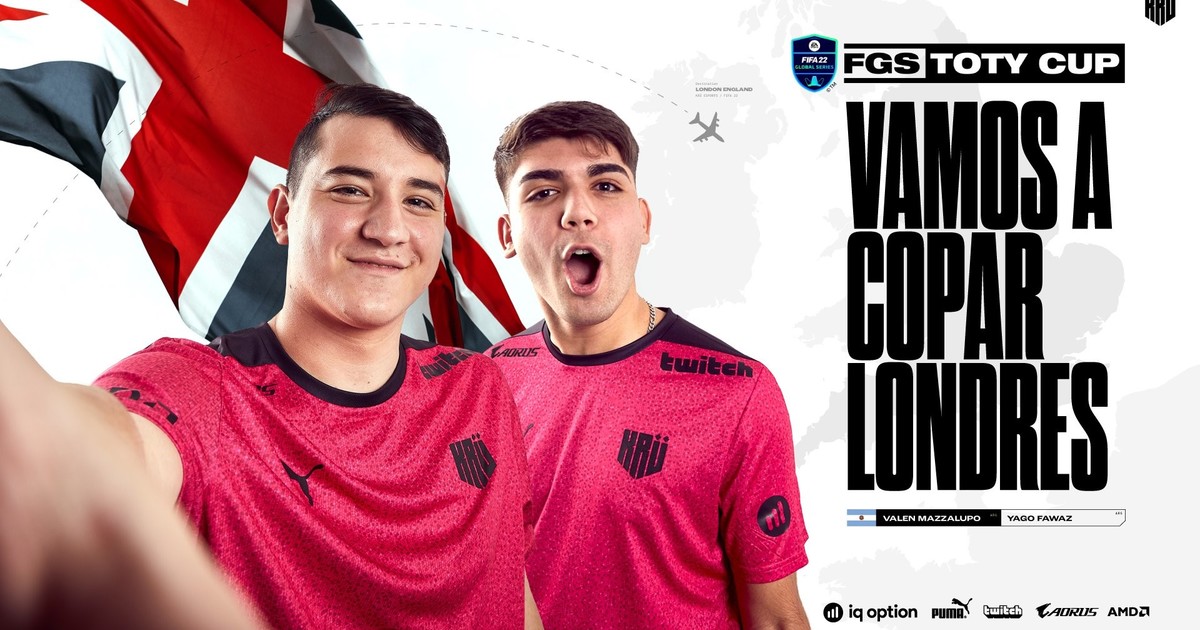 The KRÜ Esports FIFA team began participating in the FIFA Global Series TOTS Cup in London, England, with a prize fund of $500,000. The Argentine combo of Yago Fawaz and Valentn Mazzalupo will face CF Montréal in a best-of-two series on Saturday, with the goal of qualifying among the top 16 in the championship.

KRÜ Esports defeated German team NEO on the first day of the FGS TOTS Cup on Friday. After a double draw, the first series was decided by penalties (4-3). (0-0 and 1-1). These successes lead them to form a group with the Spanish team Team Herectis (formerly KRÜ Esports) of Argentine Matas Bonnano.

After a 1-0 lead for the Spaniards in the first match, Yago Fawaz and Valentn Mazzalupo managed to level the series (1-0) and force a second penalty shootout. On this occasion, Team Herectis (4-3) won and advanced to the tournament’s main draw, but KRÜ Esports had to defeat NEO again (4-2 on aggregate) to advance from the lower bracket.

The Kun Agüero virtual soccer squad headed to England for this international 2vs2 game after winning the Buenos Aires Open. Juan Manuel González, the squad coach, and Sebas Fernández, the team manager, are also present.

“The guys appeared to be in a really relaxed state. They won all three games against extremely difficult opponents, two of whom were candidates. They were excellent communicators, had excellent game reading skills, and were able to position themselves in front of adversity “, according to Sebas Fernández of Clarion. “The team is confident, hungry, and willing to put the quota that was won in Buenos Aires to good use,” he said.

The most experienced is Yago Fawaz. He has already represented KRÜ Esports in Europe after playing for Aston Villa. German Garcia Adrasti took this photo.

The competition, which takes place at the Queen Elizabeth Olympic Park in person, brings together the 32 top FIFA 22 video game teams now participating in the world of electronic sports (esports).

In addition to the $100,000 prize for the winner, the teams will compete for points in the FIFAe Club World Cup, which will be played in person for the first time following the Covid-19 pandemic’s seclusion.

Two Argentines are competing in the FIFA 22 eChampions League final.

Two Argentine FIFA 22 players participated in the Champions League playoffs, the most significant European international competition, which took place in Stockholm, Sweden, over the weekend.

GUILD Esports’ Nicholas Villalba and Team Heretics’ Matas Bonanno won their obligations to enter the top 8, earning them a spot in the tournament’s finals, which will be held on May 27 in Stockholm.

The Argentine FIFA video game legend, who represents David Beckham’s team, started the playoffs against the German Snakez of VfL Bochum 1848, whom he easily trounced 4-1. (2-0, 2-1).

In a close battle decided on penalties, his next opponent was the Italian Giovhy of Nest Esports. After a 3-3 (0-1, 3-2) tie, the Argentine won 4-1 to advance to the qualifying match.

He then defeated Israeli Yuval in another close match, this time at NAME Sports, by a score of 4-3. (1-1; 3-2). Matas Bonnano accepted to the third round, when the pass to the top 8 of the event was played, after these two triumphs.

However, in the following phase, the Argentines had to compete against each other for the right to play the tournament’s best eight players. There, the player from GUILD was up 3-1, while the representative from Heretics was sent down to the lower bracket (box below), where he had another chance to proceed to the next round of the tournament. Finally, Matas qualified by defeating Optolle Swedish Mkers player 5-3 (2-1, 3-2).