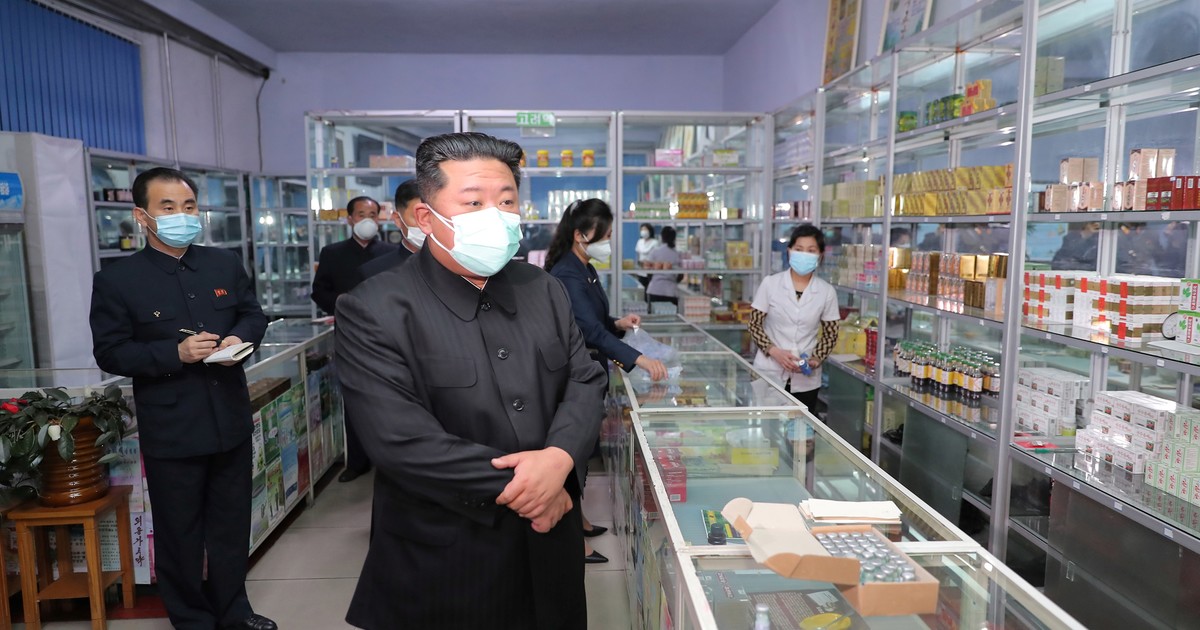 Kim Jong-un targeted his government officials on Monday in charge of dealing with the coronavirus and establishing measures to prevent contagion. He did so after learning of a new situation report that reported that there are already 50 dead in North Korea because of the disease.

The controversial leader asked to improve the distribution of medicines in the face of the flood of cases, which add up to 1,210,000 since the first contagion was confirmed last Thursday and in a context in which it is believed that the country does not have the necessary number of test kits.

With 8 new deaths apparently linked to Covid-19, there are already 50 deceased.

the country, which has not administered a single vaccinedetected 392,920 potential cases on Sunday, according to what the state news agency KCNA reported on Monday, so there are already more than 1,210,000 possible infections since the Omicron variant began to spread, apparently, at the end of April.

Of the total number of infected, more than 648,000 have recovered and just under 565,000 remain under treatment, detailed KCNA, which also reported a politburo meeting held the day before in Pyongyang and chaired by Kim Jong-un.

Kim Jong-un criticized his officials for the advancement of Omicron in his country, which did not administer a single vaccine. Photo EFE/KCNA

Kim mentioned that the emergency order to uninterruptedly release and supply state drug stocks to pharmacies is not yet being implemented, “severely criticized” the officials in charge of the operation and charged the prosecution for not “exercising legal supervision” of the aforementioned process.

For the dictator there is a failed response to the pandemic. He claimed that medical supplies are not being distributed to pharmacies on time due to their “irresponsible work attitude” and lack of organization, according to the KCNA report.

The Politburo had issued an emergency order to immediately release and quickly distribute state drug stocks and for pharmacies to remain open on 24-hour shifts, but Kim said these measures were not being properly implemented. The president ordered that the medical units of his armed forces be involved in the response to stabilize the supply of medicines in Pyongyang, reported the agency that discloses the presidential word.

After the meeting, Kim and Politburo members conducted in-person inspections of pharmacies in a Pyongyang district, where Kim lamented that most stores were in poor condition and lacked storage space. Furthermore, he criticized some pharmacists for not wearing the appropriate white coats.

Kim Jong-un criticized his officials for the advancement of Omicron in his country, which did not administer a single vaccine. AP Photo/KCNA

The situation is worrying because of how contagious the detected Omicron variant has proven to be and because the country, which ordered last week to confine “every city and county”rejected the donation of almost five million vaccines in 2021 and does not yet have a national inoculation plan.

Pyongyang has not made any public calls for aid, including vaccines, although South Korea’s Yonhap news agency reported, citing sources close to the matter, that North Korea would have asked China for support through diplomatic channels.

In South Korea, where the government will propose talks to the regime this week to deal with the sending of humanitarian aid, the new president, Yoon Suk-yeol, insisted on Monday that Seoul is willing to provide all kinds of support.

“If the North Korean authorities accept, we will spare no help neededsuch as medicines, including vaccines against Covid, medical equipment and health personnel,” Yoon said during his first parliamentary appearance as head of government.

It is not known whether the regime, which has carried out a record number of missile tests this year and is preparing a new nuclear test, would accept help from the South at a time when inter-Korean dialogue is practically non-existent.

Sending humanitarian aid promises to be one of the topics that Yoon and US President Joe Biden will discuss when they meet in Seoul this coming Saturday.