The British organization set up to fight vaccines: its members began … 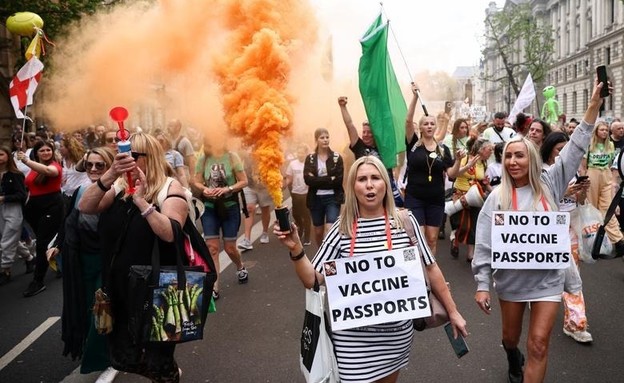 The members of the cell who planned to stop the vaccines against Corona – also by violence: Tens of millions of Britons have already been vaccinated against corona, and while the vaccination campaign in the country continues even more – some are trying to sabotage these efforts – or at least have tried to do so. The Daily Mail revealed today (Sunday) that more than 200 British discharged soldiers who are members of the “V4F” organization (“Veterans 4 Freedom” planned to sabotage the vaccination campaign in the kingdom – among other things through physical assault of vaccination centers and harassment of employees at the vaccination centers.

The leader of the organization is a former Royal Navy man, who claims that the Secret Security Service marked him and the activities of the cell he heads. On his Twitter account, where he writes under the nickname “Bellzaac”, he tweeted: “I had to shut down the traffic. Basically we were a peaceful group – and tag us as something we are not. We wanted to act legally.” But the messages he sent in the telegram group in which the correspondence of the cell members were conducted were less “peaceful.” He wrote to his friends: “No one else will do what needs to be done when things get tough.”

But the words have already become deeds on the ground: a single cell member known as “Mike Pi” sent the group’s telegram group photos and addresses of vaccine center staff and their vehicle numbers. In response, group members wrote that they have “great ideas for local activity” that includes blocking supermarkets that require presenting vaccine certificates or sending “quick response force” to schools if they start vaccinating children there.

When the leader of the organization closed the dubious telegram group, some of its members formed a new group, which read: “We must proceed with great caution. We must be clean.” V4F had hoped to gain public support for the march to parliament later this week, and the intention was even to act like an army: “The army will become a fighter and we will disable them with dirty tricks. They can be identified because they are wearing uniforms. We are not.”

The very founding of the V4F organization was revealed earlier this year, after at least 16 members of the group switched to handling the anti-terrorism program in the UK – in most cases due to fears of far-right activity in the country. The British media even found similarities between the organization that opposes vaccines and the American militias that stormed Capitol Hill in Washington last January.

The violent policy against vaccines and everything to do with immunization against Corona is not unique to the UK. Yesterday (Saturday) hundreds of thousands of protesters took to the streets of France and Italy rejoicing over the laws and restrictions of the Corona, which they claimed violated their civil liberties. France is protesting for the fourth week in a row over the distribution of vaccines and compulsory immunization for health workers – with last night the largest rally ever held, with nearly a quarter of a million protests in the country. In the city of Lyon the protest became violent.

In Italy, too, thousands have flocked to oppose the implementation of the “green passport” policy, which is required for education system workers, attending events indoors or those going on long-distance travel. Thousands marched in Milan last weekend in an illegal demonstration – with some protesters even wearing yellow badges that read “Unvaccinated”.