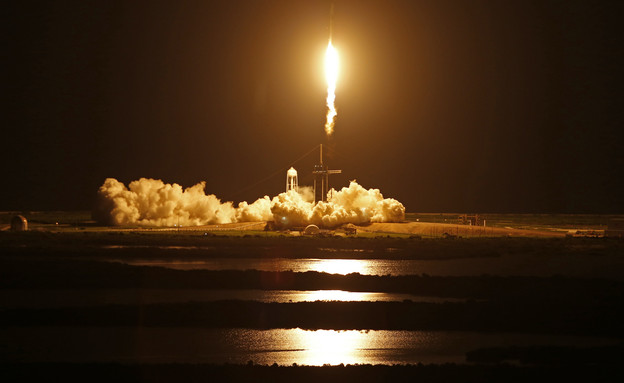 SpaceX airline owned by billionaire Alon Musk made history last night (Thursday) when for the first time ever it launched a spacecraft with no experienced astronauts at all. On board the spacecraft launched from Cape Canaveral, Florida, were two women and two men – a young billionaire who funded a significant portion of the cost of the flight, a health service worker and two others who won a special lottery to participate in the flight.

The Dragon Capsule, which was attached to the launch missile and houses the four amateur astronauts, is expected to complete a 3.day orbit during which it will orbit the Earth from a height of 160 km, higher than the International Space Station.

The leader of the mission is the 38.year.old billionaire Jared Isaacman, who made his fortune from developing a company for Internet payment solutions. He is the third billionaire overall so far to fly into space commercially over the past summer, after Richard Branson and Jeff Bezos.

Haykman was joined by Hayley Arknau, who recovered from cancer at a young age and works as a medical assistant at the medical center where she was hospitalized in her youth. At 29, she is expected to be the youngest American astronaut in history, as well as the first person in space with a prosthetic leg, a reminder of her serious illness. In addition, two lucky winners in the lottery also joined: Chris Sambruski, a 42.year.old information engineer, and Sean Proctor, a 51.year.old educator.

The peak of takeoff tonight reached a high altitude of 575 km above the earth, farther than the famous “Hubble” space telescope can see.

Dragon and the @inspiration4x astronauts are now officially in space! Dragon will conduct two phasing burns to reach its cruising orbit of 575km where the crew will spend the next three days orbiting planet Earth

According to reports, it was Isaacman who persuaded SpaceX executives to fly to a particularly high altitude this time, even though at first they vehemently refused due to the dangers involved. “If we’re going to fly to the moon again and visit Mars for the first time and beyond, it’s really natural that we’ll get a little out of our comfort zone here,” he told the media. He refused to answer when asked how much money he paid to participate in the flight.

Although the capsule operates automatically, the four have spent the last six months in flight training in order to cope well with various emergencies. The training included, among other things, staying in special centrifuges and flying in ultra.fast jets, as well as launch training and flying in a special SpaceX simulator.

Next year, SpaceX is expected to launch another commercial flight into space, in which an experienced NASA astronaut will accompany 3 wealthy businessmen on a week.long vacation at the International Space Station. In a few months, a commercial flight of the Russian space agency is planned to take off, also to the International Space Station, in which a Japanese actress, film producer and businessman will take part.