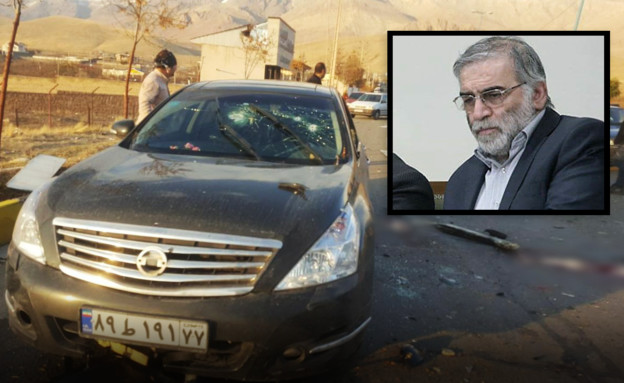 Ten months after the mysterious assassination, the New York Times published today (Saturday) new details about the assassination operation of the head of the Iranian nuclear program, Muhsin Fakhrizadeh. According to the publication, which attributes the operation to the Israeli institution, Iranian agents helped the Mossad personnel place a machine gun on a van that was standing on the side of the road in which Fakhrizada was traveling – and from which the fatal shots that led to his death were fired. Whoever pulled the trigger, did so using a computer that was located many miles outside of Iran.

According to the report, Fakhrizadeh has been in Israel’s sights for 14 years and already in 2009 they tried to eliminate him. So, a group of assassins was waiting for him in Tehran and at the last minute the operation was canceled for fear that he had been exposed and that Iranian agents were burying a tin for the institution. Following the same failure, the New York Times claims, Israel has decided to act in a completely different way.

On the day it was liquidated, November 27, 2020, the head of the Iranian nuclear program woke up about an hour before sunrise, as he used to do every day, to study the philosophy of Islam. At noon, Fakhrizadeh and his wife left their holiday home located in Absurd, east of the capital Tehran – where they planned to spend the weekend.

Iranian intelligence has warned Fakhrizadeh of the possibility of being assassinated, but it is not time for warnings. Despite his senior status in the Iranian military leadership, Fakhrizadeh wanted to live as normal a life as possible and his hobbies included reading Persian poetry, relaxing with his family at the beach and hiking in the countryside.

Ignoring the warnings of his security staff, he often drove in his private car to the resort town of Absurd, with no bodyguards or armored car. While this was a serious violation of the security protocol around him, he insisted on it.

On that fateful day, the senior scientist and his wife got into their car, a Nissan black model. His wife sat in the passenger seat next to the driver – and the two set off. Earlier, according to a report in the New York Times, Iranian agents working for the institution parked a blue Nissan pickup truck on the side of the road connecting Absurd to the main road.

The place where the van was parked was slightly elevated and from which the vehicles advancing in its direction could be clearly seen. Under the tarpaulin and camouflaged using building materials, a machine gun with artificial intelligence with 7.62 mm diameter bullets was placed on the van.

At around 13:00 noon, the assassin unit received a signal that Shafharizada, his wife and a bodyguard unit were preparing to leave the absurd. The assassin positioned himself in his position, aimed his weapon and pulled the trigger. But he was very far from Iran. In fact, he leaned over a computer screen located in an unknown location miles away, after the entire elimination unit had already left the country.