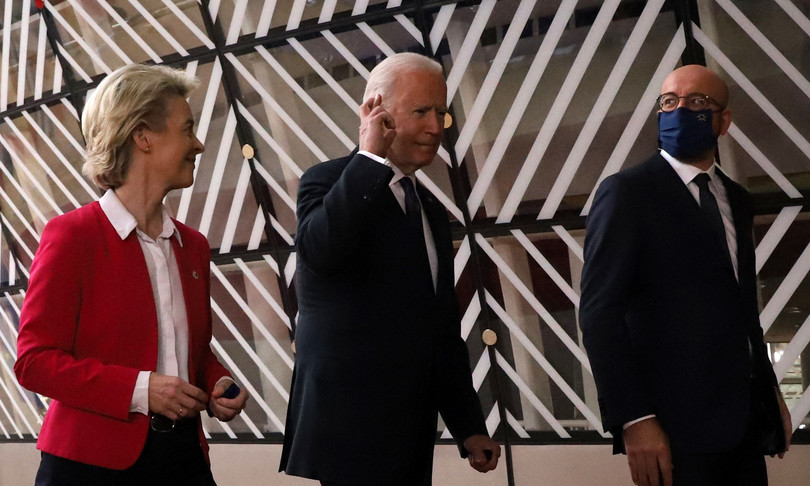 “America is back”, repeated the President of the European Council, Charles Michel, on June 15, welcoming the American president to the Justus Lipsius Palace in Brussels, Joe Biden– “It means that we have a very strong partner again to promote the multilateral approach, a big difference with the Trump administration,” he later explained to reporters. “We finally have a friend back in the White House”, echoed the president of the European Commission, Ursula von der Leyen– “The Atlantic has returned to center stage”, confirmed the President of the European Parliament, David Sassoli– Biden himself was no less: “Europe is our natural partner, because we are bound by the same democratic values ​​and institutions that are under increasing attack. I have a very different vision from that of my predecessor.” Two months later, the August 15, with the fall of Kabul, most of the intentions were questioned. Three months later, on September 16 – with the US.GB.Australia anti.China alliance – good intentions have gone up in smoke.

“The situation in Afghanistan invites us to analyze and make choices in line with our geostrategic visions and interests. The Afghan crisis requires us to undertake a large.scale exercise of strategic autonomy, “wrote Michel on his blog on September 2.” We went to Afghanistan with our US allies and we leave the country with them. But the new situation has very different implications for the United States and for Europe. It is for this reason that Europe must quickly make choices linked to its strategic interests “, he made clear.

“The need to reduce our dependencies and strengthen our strategic autonomy is increasingly evident. The EU and its member states must have greater weight in the world, to defend our interests and values ​​and to protect our citizens. This autonomy strategic, whose defense and security component needs to be developed, completes our alliances. A stronger Europe will also strengthen our alliances and, consequently, our allies “, is the new line. And in his speech at the Bled Forum the reference to his own army was direct: “Can we be happy with an EU that is unable to protect its citizens and collaborators?“, he asked in reference to the evacuation operations from Kabul airport for which the EU had to entrust itself to other states.

The EU High Representative for Foreign Policy, Josep Borrell, is already working on a practical strategy. He calls it the “Strategic Compass” for the common defense of the EU and will present it in November. The goal is to approve it in March, when the Heads of State and Government of the 27 will meet precisely on the issue. “Afghanistan has impressively demonstrated that shortcomings in the EU’s ability to act autonomously come at a price. The only way forward is to join forces and strengthen not only our capabilities, but also our will to This means enhancing our capacity to respond to hybrid challenges, filling key gaps in action, including in logistical transport, increasing the level of preparedness through joint military training and develop new tools such as the “first intervention force”, made up of five thousand people, which we are actually discussing. This intervention force would have helped us to guarantee a security perimeter for the evacuation of EU citizens to Kabul, “he explained at the end of the meeting of the foreign and defense ministers earlier this month.

A mini.army to name European values

The plan is therefore to have its own mini.army to “protect European interests and values”. “What we need is the European Defense Union”, remarked von der Leyen in his State of the Union address. The obstacle, however, is to overcome the bond of unanimity. The defense ministers are engaged in a discussion, which will have to end in November, on the possibility of replacing the unanimity required for intervention decisions with a majority vote that would give way to military intervention with the participation only of the States that they will want it.

In particular, for example, Germany is bringing the appeal Article 44 of the Treaty Union that would allow participation in operations based on the will of the States. Not all Twenty.seven, in essence, would be forced to take part in an EU mission. “We will evaluate this but Article 44 still requires a unanimous decision from the Council and, then, only those who wish to participate in the mission will be able to participate in the mission. Not everyone has to participate but everyone has to agree, “explained Borrell.

An army without autonomy, however, can do little. This is why the EU is moving to protect its own interests which do not always match those of its main allies, starting with the United States. A striking example was the slap in the face of the anti.China alliance signed between the US, Great Britain and Australia.

“An agreement of this nature was not prepared the day before yesterday, it takes time. But we have not been informed, we have not been consulted. We deplore it”, said the head of European diplomacy, who nevertheless urged “not to exaggerate,” not to dramatize “. “This will not question the relationship with the United States,” he assured. Just as it will not affect cooperation with Canberra and London, “even if the British leaders do not show much enthusiasm”. But the consequences will be there and according to EU sources they are “worrying”. We will talk about it in detail in the next one meeting of foreign ministers to be held on 18 October in Luxembourg–

Meanwhile, Paris where to deal with the immediate consequences: the termination by Australia of the contract for the supply of conventional submarines for the benefit of the nuclear ones proposed by the United States and Great Britain. “To put it in good French, it’s really a stab in the back”, the Foreign Minister let go indignantly. Jean.Yves Le Drian– “I understand the disappointment of the French,” said Borrell. “This agreement forces us once again to reflect on the need to be independent and to develop the strategic autonomy of the EU”, he reiterated. France then recalled its ambassadors to the US and Australia–

“The US.GB.Australia security partnership once again demonstrates the need for a common EU approach in a region of strategic interest– A strong European strategy for the Indo.Pacific region is more necessary than ever “, confirmed Michel. The European Union is trying to relaunch with its own cooperation strategy with the Indo.Pacific region.” A cooperation strategy with partners. democrats who share our values, not a strategy of confrontation “with China, Borrell specified. And the cooperation proposal with Beijing remains valid.” The EU wants to create links with the countries of the region, not create dependencies “, he said. added.

“This region is the future. The EU is the largest investor with € 12 trillion, which is double the United States, and is the second largest market for its exports,” he said. “40% of trade with the EU goes through the China Sea and the EU has an interest in preserving free movement for navigation in this region,” he added. For this reason, the strategy also provides for a “European naval presence” which, however, should not be understood as a threat to China.