Guterres warns that the world is facing a “dead end” motivated by COVID.19 and the climate crisis 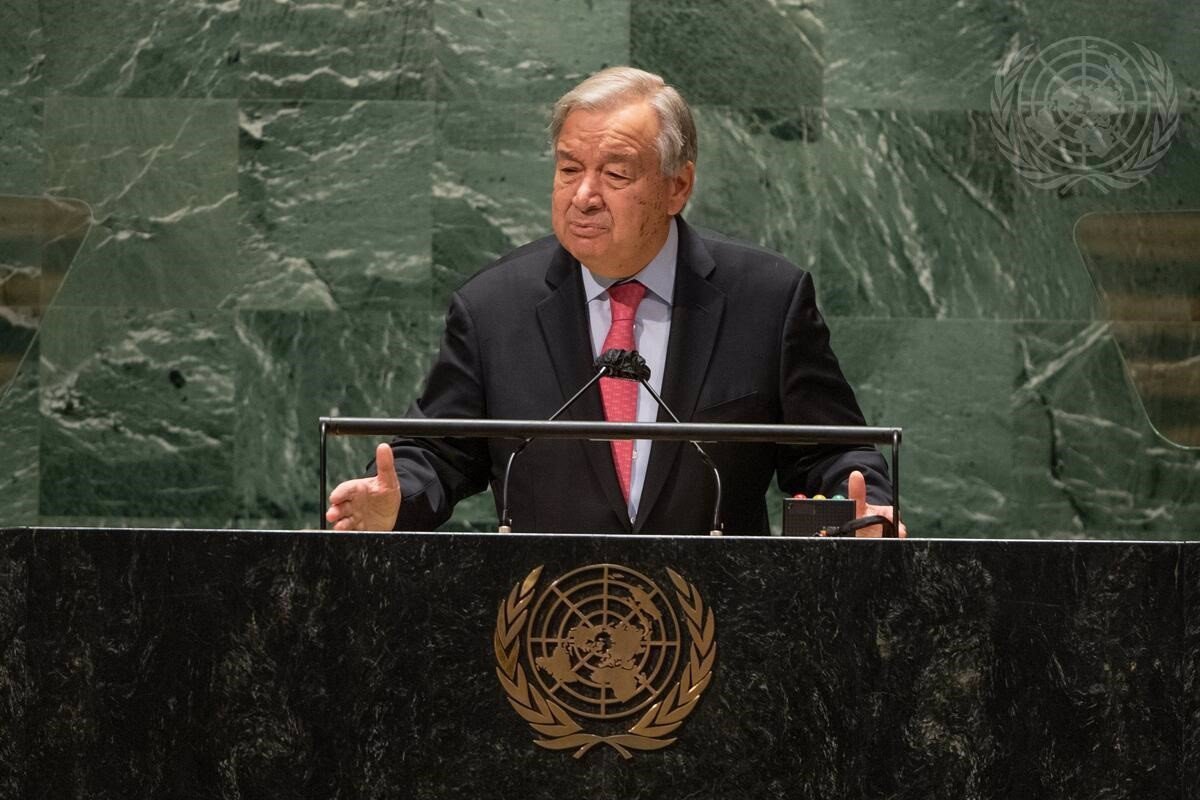 The UN chief laments that “solidarity is absent just when it is most needed”, while urging the world to “wake up”

The Secretary General of the United Nations, António Guterres, has warned this Monday of the “dead end” facing the world, motivated by the COVID.19 pandemic and the climate crisis. “We are on the edge of the abyss and we are moving in the wrong direction,” Guterres warned, advocating “multilateralism” for a “more peaceful” world.

In his inaugural speech at the 76th United Nations General Assembly, Guterres has defended that the world must “wake up”, since it is “more threatened and divided than ever”, with the pandemic “overestimating the flagrant inequalities” of the planet, which a the time “is being hit by the climate crisis.”

Added to this is the “turmoil” that from Afghanistan to Ethiopia and Yemen is “frustrating the peace” while a “wave of mistrust and misinformation is polarizing people and paralyzing societies.” All this with “Human Rights under threat” and science “being attacked.”

Guterres, in his speech, has criticized that “solidarity is absent, just when it is most needed”, while “economic aid for the most vulnerable comes too little and too late, if it does.”

Peace, Human Rights, dignity for all, equality, justice and solidarity, the “fundamental values”, are “in the spotlight” while “the lack of results” provides “oxygen for easy solutions and conspiracy theories, “becoming” the fuel to stoke old grievances, “such as cultural supremacy or ideological domination, Guterres has exemplified.

In reference to world geopolitics, he specified that “an explosion of seizures of power by force” is being experienced, with the return of the military coups, and with an imposition of the “feeling of impunity”, at the same time that it is “impossible” to address economic and development challenges while “the world’s two largest economies are facing off.” Addressing these problems requires “cooperation, dialogue and understanding”, he concluded.

Faced with all this, the head of the UN has indicated that this is a “time to rekindle the future”, an “era of possibilities” and a “moment of transformation.” “This is our moment. (…) Let’s rebuild trust. Let’s inspire hope,” he added, to stress that it should start “right now.”

“The problems that we have created are problems that we can solve,” he continued, to point to “six major divisions.” Among them, “bridging the peace gap”, in which he made special mention of Afghanistan, where humanitarian aid must be “promoted,” and also Ethiopia, where hostilities must cease “immediately”, as well as Yemen, Haiti. or the Sahel, among other territories.

A TRIUMPH “UNDONE BY THE TRAGEDY OF SELFISHNESS”

“Perhaps an image explains the history of our time”, has denounced Guterres, referring to how in some parts of the world vaccines against COVID.19 have ended up “in the trash” or “expired and unused”, a ” triumph undone by the tragedy of lack of political will, selfishness and mistrust ”

“A majority of the richest world vaccinated”, while “more than 90 percent of Africans who are still waiting for their first dose,” said the Secretary General, to consider that it is an “obscenity” and “a moral accusation of the state of our world “. “We have passed the scientific exam. But we are failing in Ethics.”

“THE WINDOW IS CLOSING QUICKLY”

“Scorching temperatures. Scandalous loss of biodiversity. Air, water and natural spaces contaminated. And disasters related to the climate at every step”, has argued the head of the UN, to warn that “the alarm bells of the climate are also ringing at full speed “, especially after the recent report of the Intergovernmental Panel on Climate Change (IPCC), which has activated the” red code “for humanity.

“Climate scientists tell us it’s not too late to keep the Paris Agreement’s 1.5.degree target alive,” but “the window is closing fast,” so Guterres has advocated a “45 percent cut. of emissions by 2023 “. Something that according to recent UN reports will not happen, but “emissions will increase by 16 percent by 2030.”

This would condemn the planet to “a hell of temperature rises of at least 2.7 degrees above pre.industrial levels: a catastrophe,” he warned.

Another consequence of COVID.19 has been the worsening of “the oldest injustice in the world: the imbalance of power between men and women”, since these have constituted “the majority of front.line workers” in the crisis health while they have been “the first to lose their job and put their career on hold to take care of their loved ones.”

In the case of girls, school closings have “disproportionately affected girls, slowing their progress and increasing the risk of abuse, violence and child marriage.”

“Ending the gender gap is not only a question of justice for women and girls”, but it is a “game changer for all humanity”, since “the most egalitarian societies are also more stable and peaceful”, in addition to having “better health systems and more dynamic economies.”

Finally, Guterres has advocated “bridging the gap between generations”, since “young people will inherit the consequences” of the decisions made in the present, both “good and bad”, which will also affect 10.9 billion of people expected to be born before the end of the century.

“Young people need more than support. They need to have a seat at the table”, so the secretary general has announced that he will appoint a special envoy for Future Generations, in addition to creating the United Nations Office of Youth.

In his speech, Guterres has defended that “youth need a vision of hope for the future”, since the majority of young people suffer “high levels of anxiety and anguish about the state of our planet”, while 60 percent “They feel betrayed by their governments.”

Faced with this, young people must be shown that “despite the seriousness of the situation, the world has a plan, and that governments are committed to its implementation.”