EU summit: Yes to Ukraine, but only no to the Western Balkans 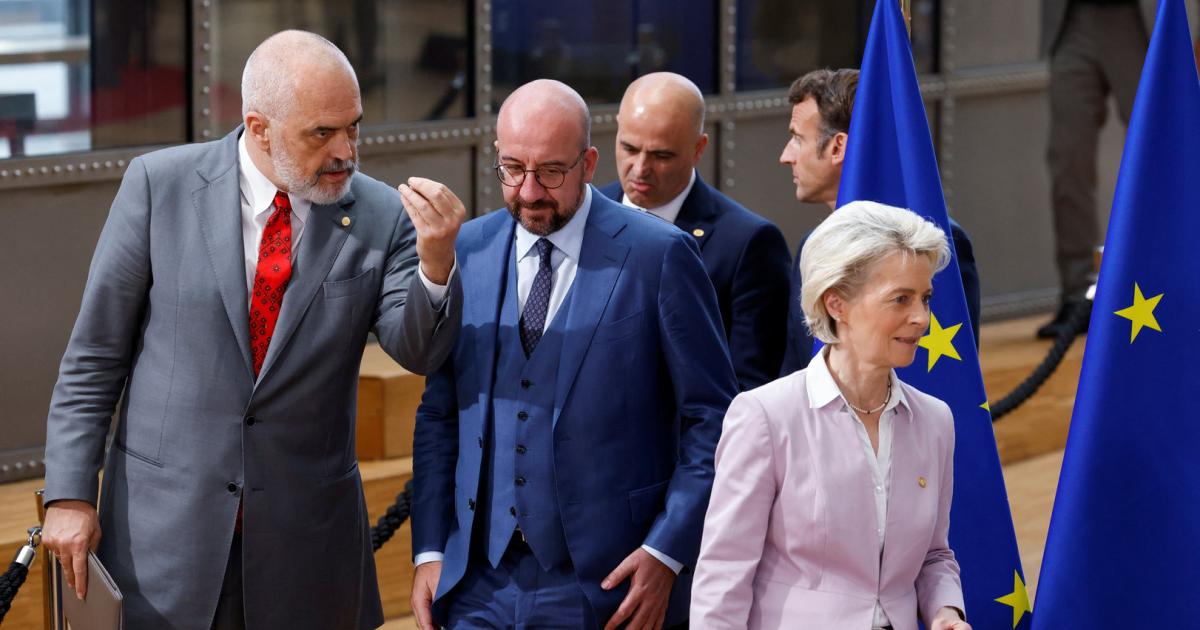 The extension offer only went to Ukraine and Moldova: there were no positive surprises for the heads of government of the Balkan states in Brussels

Albania’s Prime Minister Edi Rama cannot be accused of excessive diplomatic restraint: “It’s a disgrace,” the Albanian head of government rumbled on Thursday and, in his bluntly open manner, pulled off the leather at the meeting of EU heads of state and government in Brussels: “In NATO country – Bulgaria – is holding two other NATO countries – Albania and North Macedonia – hostage amid a hot war in Europe,” Rama said. “And the others watch in their impotence.”

The Prime Minister of the Balkan state was not alone in his frustration yesterday: Ukraine and even the small Republic of Moldova were to be given the status of an EU candidate country at the EU summit yesterday. But all six Western Balkan countries continue to sit in different rows on the waiting benches in the large anteroom to the EU.

EU candidate status is only a symbolic step – and many years away from EU accession for the two ex-Soviet republics. It is seen as a sign of Europe’s support for Ukraine, which has to defend itself against Russian aggression in the war. Moldova, where Russian soldiers are stationed in the breakaway region of Transnistria, is also to receive symbolic assistance from the EU.

But for the heads of government of the six Western Balkan countries, the level of indignation is now full: in Brussels, double standards are being measured. For the countries Serbia and Montenegro, which have been negotiating with Brussels for years about accession, little or nothing is moving.

North Macedonia and Albania were again denied the green light to start accession negotiations yesterday. For Kosovo there is not even a visa exemption for travel to the EU. And Bosnia has been waiting in vain for five years to be recognized as a candidate country.

For a long time, the situation was similarly hopeless for Ukraine with regard to EU accession: “A few months ago it was still unimaginable that Ukraine would receive candidate status,” recalls a high-ranking EU diplomat.

Since the Russian war, however, other criteria have applied: the EU wants to make a huge geopolitical move – and also slow down Russia with candidate status for Ukraine. The fact that neither Ukraine nor Moldova meet the requirements that applicants previously had to meet is no longer relevant.

There are also plans to release a further nine billion euros in aid for Kyiv in the near future. This is intended to support the functioning of the Ukrainian state.

But what applies to Ukraine must also apply to everyone else, Federal Chancellor Karl Nehammer demanded: “The same rules for everyone, that is a requirement of fairness and justice,” he warned at the summit and he demanded: Bosnia-Herzegovina should therefore also Obtained candidate status, not only Ukraine. “In view of the close relations with Austria, the EU rapprochement process for the countries of the Western Balkans is in our very own interest,” said Nehammer. However, the EU summit on Thursday was not even able to agree on more than vague declarations of intent to “advance the EU enlargement process in the Western Balkans”.

The “yes” of the 27 EU heads of state and government for Ukraine was expected all the more offensively and loudly yesterday evening. With candidate status, Ukraine will receive significant financial support from the EU. In addition, she was promised further economic, military, social and humanitarian aid in the fight against Russia.

But what the leadership in Kyiv is calling for most urgently – namely the delivery of many more heavy weapons – was not an issue at the summit.

“More hardware instead of political software would help Ukraine better,” said a summit observer on Thursday with a pinch of sarcasm.

And Albania’s Prime Minister Edi Rama also warned in the exit: “The Ukrainian people should not be under any illusions.”

One thought on “EU summit: Yes to Ukraine, but only no to the Western Balkans”