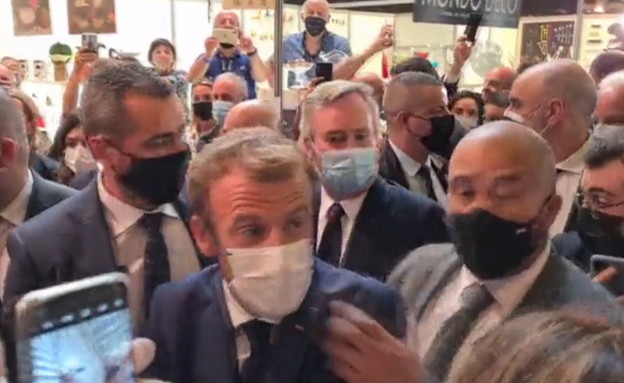 Came out cheap: A difficult and unpleasant experience passed today (Monday) on French President Emanuel Macron while visiting a market in the city of Lyon. During the visit, which was held as part of the Euro Expo conference, an egg was thrown at the French president – hitting him straight in the face. Luckily for Macron, the egg that hit his face did not explode, splashing from it.

According to French media, a young Frenchman was arrested on suspicion of throwing the egg at the president. It was also reported that the same young man shouted a series of calls for protest against Makron before the egg was thrown, among other things he shouted “Long live the revolution”.

Shortly after the egg was dumped the suspect had been documented handcuffed by security forces at the scene. According to reports, President Macron even asked his immediate staff to meet the person suspected of the act and ask him the reason for his act.

The egg.throwing event today comes after another unusual protest event experienced by President Macron almost 4 months ago, then during a visit to the south of France was attacked by a man who slapped him hard in the face. In the same incident, the demonstrator was documented shouting at Macron “Enough Macronism”. He was arrested immediately after the incident.

Recently, President Macron has been in considerable political distress at home and abroad, in part against the backdrop of the new defense alliance between the United States, Britain and Australia.

The new deal with Washington led Canberra to cancel a deal to buy a French.made diesel submarine fleet, signed in 2016. The submarine deal between Australia and France was valued at tens of billions of dollars, and its cancellation is a blow to Macron ahead of the April 2022 presidential election.