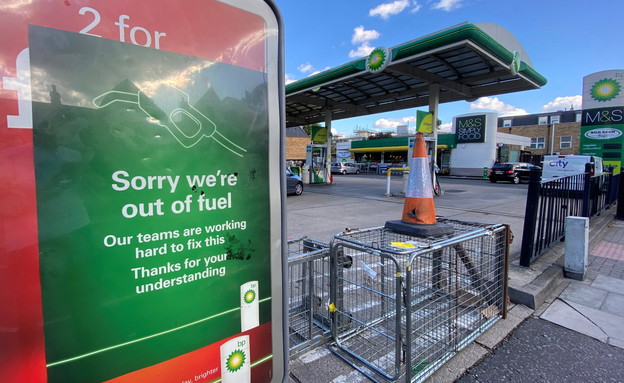 In the UK, long queues of vehicles are reported today (Tuesday) at the entrance to gas stations across the kingdom, due to citizens’ fears of a shortage of supplies. Due to high demand, fuel has run out at some stations and the government has deployed forces and army trucks to help deliver fuel to those in urgent need.

One of the main reasons for the public panic and the problems with the fuel supply is due to another shortage that the British suffer from – of about 100,000 truck drivers. The supply chains of a variety of services across the country are faltering as a result of the lack of drivers, and among the victims are also the energy companies. Oil company BG announced last week that it will be forced to close gas stations as there are no drivers to lead the tankers.

There is a shortage of truck drivers in the EU in general, but the UK has been hit hardest by this. After the British Brexit, European drivers who worked in the kingdom returned to their home countries or decided to work in other countries because of bureaucracy and other restrictions that affected their income. A combination of the three problems – driver shortages, supply chain problems and public panic – caused a fuel crisis in the kingdom.

The Minister of Industry stressed that the shortage of fuel is due to public panic and not due to a real shortage. Despite this, the media report that drivers continue to arrive at gas stations and thus aggravate the situation. The environment minister added: “The most important thing is that people will continue to buy at the same rate they would buy until today.”

Some stations were forced to close after failing to meet high demand. Colin Evans, who owns a gas station in South Wales, said he usually sells between 20,000 and 30,000 gallons of fuel a day, but in the last day he has sold more than 100,000 gallons.

The oil companies, including ExxonMobil, Shell and Greenergy, stressed that “there is no national shortage of fuel” and that the problem with supply at the moment stems from a “temporary jump in customer demand”.