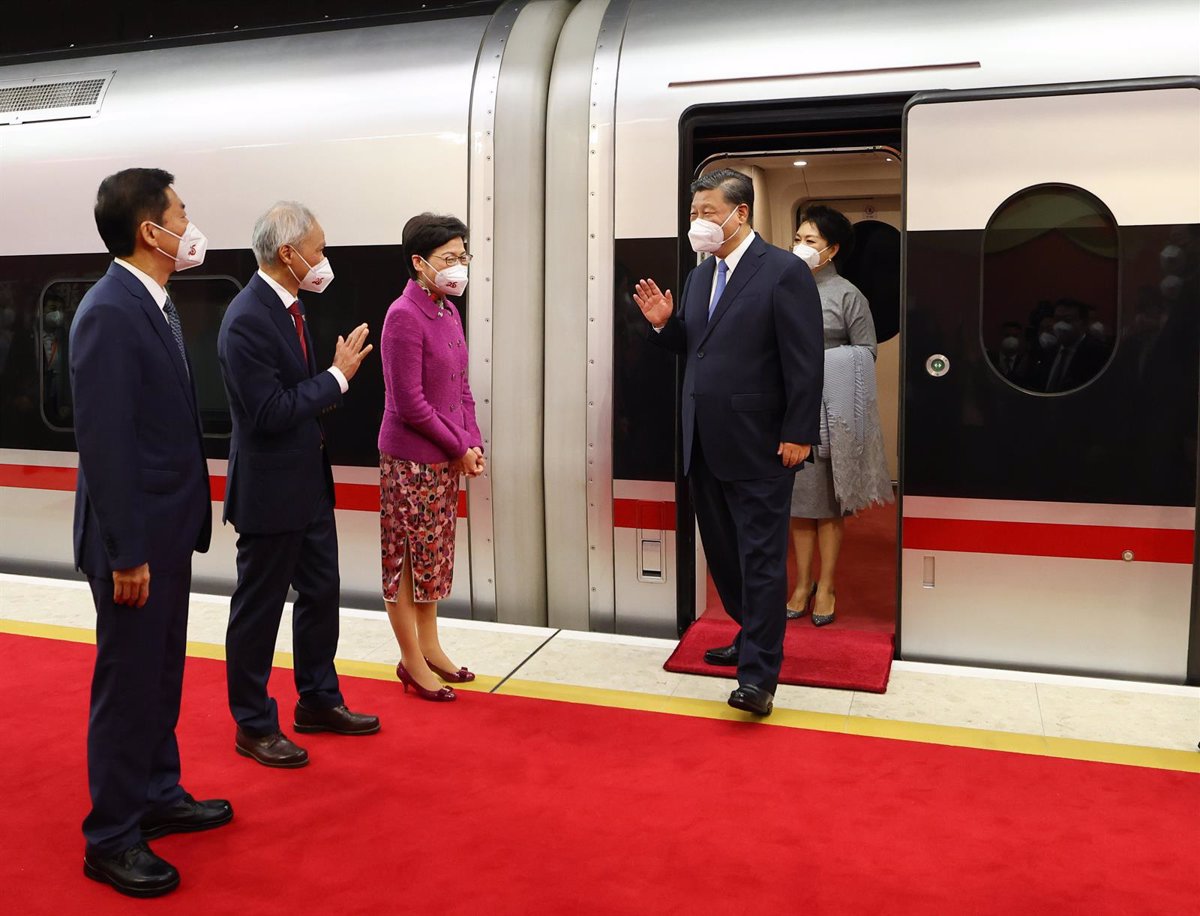 Chinese President Xi Jinping arrived in Hong Kong on Thursday to attend, after two years without leaving mainland China due to the COVID-19 pandemic, the celebration of the 25th anniversary of the “return” of the former British colony to China, which took place on July 1, 1997.

“As long as the principle of ‘one country, two systems’ is resolutely upheld, Hong Kong is sure to have an even brighter future and make new and greater contributions to the great rejuvenation of the Chinese nation,” he said. three-minute speech.

The Chinese president has also referred to Hong Kong’s challenges in recent years, especially the coronavirus pandemic. “After the wind and rain, Hong Kong has risen from the ashes and showed strong vitality,” he added, as reported by the Xinhua news agency.

Xi has been received by the outgoing leader, the Hong Kong head of government, Carrie Lam, who will be succeeded by John Lee, who has also been present at the president’s welcome together with other personalities, such as the president of the Supreme Court, Andrew Cheung Kui Nung, and the director of Beijing’s national security office in Hong Kong, Zheng Yanxiong.

In fact, Xi is scheduled to lead the swearing-in of incoming leader John Lee, who was elected in May as the new ruler to succeed Lam, who has been in the Hong Kong government since 2017, on the occasion of the anniversary.

After this short welcome and Xi’s speech, delivered at the West Kowloon high-speed rail terminal, the Chinese president’s entourage headed for the Exhibition and Convention Center in the busy Wan Chai, Hong Kong’s commercial area , where businessmen and politicians from different sectors were waiting for him.

Throughout the day, Xi met with the head of the Government of the Chinese special region of Macao, Ho Iat Seng, as well as with the vice president of the National Committee of the Chinese People’s Political Consultative Conference, Leung Chun Ying.

The Chinese president has also held a meeting with Lam at the Exhibition and Convention Center. Subsequently, both have held a dinner at the official Hong Kong residence, accompanied by their respective partners, as reported by ‘South China Morning Post’.

Before the Chinese president’s official trip, the authorities have highlighted, in the framework of the NATO summit being held in Madrid, that the new Strategic Concept approved by the Alliance “is full of the Cold War mentality” and “bias ideological”, while denouncing that it represents “a malicious attack and defamation” against Beijing.

“We are firmly opposed,” said a spokesman for the Chinese mission to the European Union (EU), before reiterating that “NATO is a remnant of the Cold War and the largest military alliance in the world.” “30 years after the end of the Cold War, he has not abandoned his way of thinking and his practice of creating enemies and engaging in bloc confrontation,” he has argued.

The celebration of the Transfer of sovereignty of Hong Kong comes, therefore, at a time of tension between the leaders that make up NATO and the Asian giant, since the Alliance has assured that “the manifest ambitions and coercive policies” of Beijing “they threaten our interests, security and values.”

The inclusion of China in the Strategic Concept was expected given the changing circumstances on the international scene. Beijing has been off the radar of allies for decades, not posing a direct military threat, but it had not been considered a danger until now.

In the case of Hong Kong, the 1984 Sino-British Joint Declaration signed by London agreed to return Hong Kong to China in return for Beijing’s commitment to grant a large degree of political autonomy to the former British colony.

However, political tension has recently grown mainly as a result of protests in Hong Kong, a territory that remained under British sovereignty until a quarter of a century ago. The imposition of the National Security Law and this latest electoral reform have aggravated the situation.