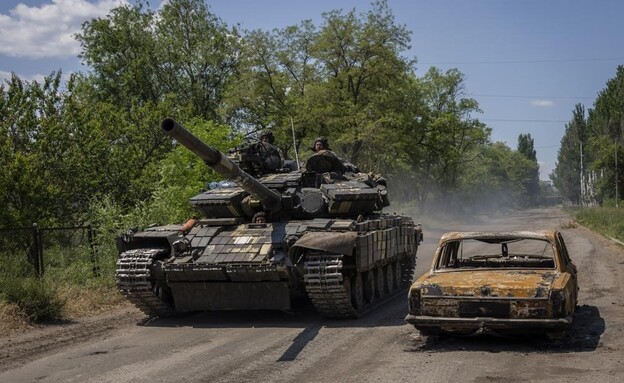 Over the weekend, fighting was concentrated on the outskirts of Lishansk, mostly near the refinery near the city. Yesterday at noon, the pro-Russian separatists announced that they had entered the city center for the first time. Now, the Russians also confirm the report – claiming that they managed to complete the occupation of the city, which was home to more than one hundred thousand people on the eve of the war.

The fighting in eastern Ukraine continues to be intense, and now the question arises as to what the next objectives of the Russian army will be. According to the Russian announcement with the opening of the campaign in eastern Ukraine in mid-April – they intend to occupy the entire Donbass region. Now that they have completed the occupation of the most eastern Lugansk district, it is likely that the Russians will also seek to complete the occupation of the Donetsk district, west of Lugansk. At this time, the Russians control the southern Donetsk region, but not the northern part – where the cities of Kramtorsk and Sloviansk are located.

The occupation of Lugansk by the Russians is a severe blow to the fighting efforts of the Ukrainians, who in recent weeks have been trying to convey optimism about the continuation of the fighting. Only in recent days have the advanced HIMARS cannons received by the Ukrainians from the Americans arrived on the battlefield, and it has been argued that they may constitute a tiebreaker in battles. In recent days, many documents have been published of the successful destruction of Russian ammunition depots carried out by the Ukrainians, possibly through the new weapon systems they received from the West, including the French Ceaser cannons.

At the same time as the East, the fighting in the south is also escalating

After for many weeks the whole world’s attention has been given mainly to the fighting that is taking place in eastern Ukraine, recently the fighting is resuming in the south as well. Many areas in the south that were occupied by the Russians in the very early stages of the war – are now at the center of renewed fighting, due to a successful counterattack by Ukrainian military forces. Recent events on the battlefield, along with events in Russia’s significant areas of control, may indicate difficulty in continuing to hold on to them.

Over the weekend, the Ukrainians announced that Russian forces had completely withdrawn from the snake island in the heart of the Black Sea. The Russians, for their part, confirmed the report, but said they did so because of a “gesture of goodwill” – aimed at helping reduce the siege on the Black Sea. On the other hand, the Ukrainians claimed, which was also reinforced by an update from the British intelligence, that the Russians withdrew because they could not cope with the powerful attacks of the Ukrainian army. In recent weeks, the Ukrainians have rained heavy bombs on the island – from the air, and from land.

Even in Kherson province, perhaps the city that first fell to the Russian army at the beginning of the war, is not quiet at all. A series of military attacks by the Ukrainians in recent weeks have managed to disrupt Russia’s hold on the northern part of the province, and President Zlansky has stated that Ukraine is “gradually liberating the region.” In addition, beyond the advance of the Ukrainian army in the region – even the population of Ukrainian civilians in the region did not say desperate – and in recent weeks managed to eliminate three senior Russian officials stationed there after the occupation of the city.

Today, British intelligence confirmed the long-known assessments that Russia intends to hold a referendum with Kherson on official and legal membership of the Russian Federation. In Ukraine and the West are sure that if such a referendum is carried out – it will clearly be illegal and unfair, and is necessarily expected to serve the interests of the Russians in the place. Because of this, it is likely that the Ukrainians see a great urgency in trying to liberate the region – perhaps before an official Russian decision is made regarding its annexation.

Simultaneously with the fighting in Kherson, this morning the Ukrainians bombed a Russian military base in Melitopol, another city in southern Ukraine that was occupied relatively early in the fighting. The Ukrainians reportedly fired dozens of shells and rockets at the air base.

The mayor of Melitopol, Ivan Fedorov, confirmed the rocket attacks, adding that the target was one of the occupiers’ military bases in the city. pic.twitter.com/D01eZkNXL1

Simultaneously with the intense Ukrainian attacks in the region, other cities in the south continue to be the target of Russian bombings as well. The city of Nikolaev, not far from the city of Odessa, has been hit in recent days by heavy rockets, which have killed and injured several civilians. In Odessa itself, too, dozens of people have been killed in recent days as a result of a Russian bombing of civilian residential buildings. In the West, it is estimated that the Russians used the bombing in Odessa, as well as the bombing of the Kremenchuk shopping center last week, with missiles designed to hit vessels, which could inevitably cause extensive damage in an attack on an urban environment.

In addition, in the West, there is a growing fear that Russia is currently seeking to step up in the bombing of civilian targets deep in Ukraine, after long weeks of relative calm in many cities. One possibility raised is that Russia is seeking to signal that it does not intend to advance militarily after the completion of the occupation of the Donbas region – and these bombings are primarily intended to warn Ukraine and the West of attempts to hit areas already occupied by the Russians.