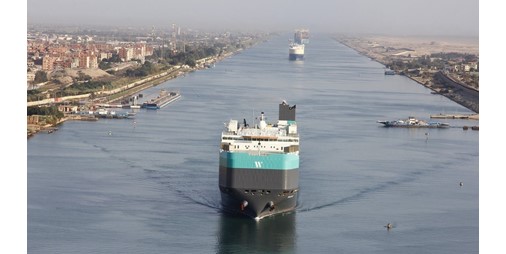 The head of the Suez Canal Authority, Lieutenant-General Osama Rabie, announced today, Monday, that the navigation statistics in the canal during the fiscal year 2022/2021 recorded “new and unprecedented records” throughout the history of the canal, achieving the highest annual net tonnage for a fiscal year of 1.32 billion tons, and the highest annual revenue. Mali, with a value of $7 billion, exceeding all previously recorded figures.

In a statement published by the Suez Canal Authority on its Facebook page today, Rabie said that navigational reports during the fiscal year 2021/2022 monitored a significant increase in the number of ships transiting the canal, as 22,032 ships crossed the canal during that period, compared to 19,047 ships. During the fiscal year 2021/2020, a difference of 2,985 ships, an increase of 15.7 percent.

He pointed out that the increase in the number and tonnage of ships transiting the canal during the fiscal year 2022/2021 contributed to achieving a major boom in the revenue of the canal denominated in dollars, achieving the highest annual financial return in the history of the canal of seven billion dollars, compared to 5.8 billion dollars during the 2021/2020 fiscal year, an increase amounting to $1.2 billion, an increase of 20.7%.

The head of the Suez Canal Authority stressed that the unprecedented record results recorded by the transit trade movement in the Suez Canal during the fiscal year “are a reflection of some global changes that led to an increase in the savings achieved by the Suez Canal compared to alternative routes in light of the high prices of chartering ships and shipping lines, the rise in oil prices and the change in Map of world trade as a result of the Russian-Ukrainian war.

Lieutenant-General Rabie stressed that successive global crises “proved beyond any doubt the leadership of the Suez Canal and its importance to ensure the stability and sustainability of global supply chains as the fastest, shortest and safest navigational routes.”

Lieutenant-General Rabie revealed the increase in the rates of crossing different types of ships of the world fleet through the Suez Canal during the fiscal year 2022/2021, pointing out in this regard that container ships transiting the canal during that period were the most important categories of ships transiting the canal according to the total transit tonnages and their percentage of revenue. The investigator, as 5520 container ships crossed with a total net tonnage of 638,000 tons, achieving revenues of $3.4 billion during the fiscal year 2022/2021, which is explained by the fact that many shipping lines added new navigational services through the canal.

He pointed out that dry bulk vessels came in second place as the most important category of vessels transiting the Canal, as 6,327 bulk vessels with a total net tonnage of 254 thousand tons crossed, achieving revenues of 1.3 billion dollars. To make up for the shortfall in Russian supplies to these countries.

He added that oil tankers ranked third in terms of their relative importance, as 5451 oil tankers with a total net tonnage of 236 thousand tons crossed, achieving revenues of 1.2 billion dollars in that period affected by the improvement in demand for crude oil with the recovery of major economies.

He pointed out that 886 liquefied natural gas tankers with a total net tonnage of 97,000 tons have crossed, generating revenues of $435 million. The Suez Canal also witnessed the transit of 1959 general cargo ships, 966 car carriers and 60 passenger ships.