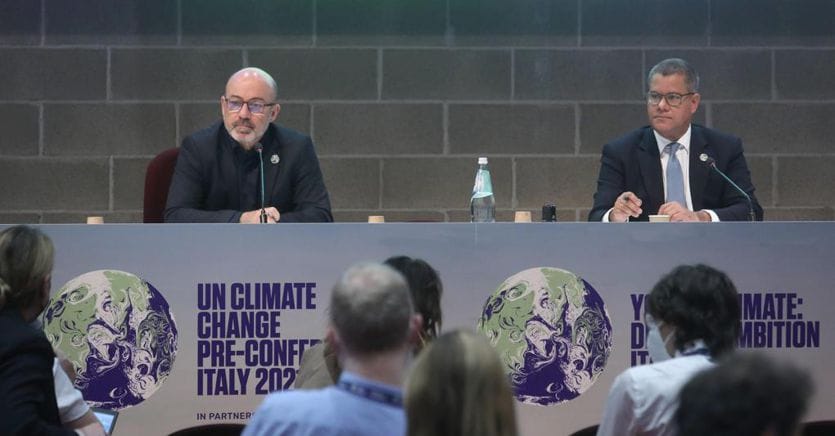 Keep faith with the promise made on aid to the most fragile countries and reaffirm the collective commitment to contain the increase in global temperatures within the safest and most ambitious threshold, that of 1.5 degrees compared to pre.industrial levels. These are the messages delivered by the Milan Pre.Cop, the meeting between fifty ministers of the environment that was held between Thursday and Saturday 2 October. The summit closes with signs of openness from China and one could hardly ask for more. It will be up to the G20 at the end of the month in Rome to try to raise the bar again, in view of the Cop26 to be held in November in Glasgow, organized by the United Kingdom and Italy. The UN conference on the environment is considered by many to be the last chance on climate, even if on Saturday 2 October the US envoy, John Kerry, invited us to consider it “the starting line of the race of the century and of this decade”.

China “opens up” to reducing emissions

In the final press conference, the president of COP26, the British Alok Sharma, and the minister for ecological transition, Roberto Cingolani, underlined that during the proceedings, Beijing showed a different sensitivity compared to the G20 of the Environment in Naples in July. China is the first country in the world for CO2 emissions and is heavily dependent on coal. It recently agreed to turn off the taps on power plant projects abroad. «All governments have said they want COP26 to be a success. There is a general recognition that climate change has no borders, ”Sharma said. “Since the end of July, the sense of urgency has increased enormously,” said Cingolani. In August, the UN Scientific Committee on Climate (IPCC) denounced that, without drastic changes, average temperatures will rise by 1.5 degrees already in the next two decades and by the end of the century there is a risk of exceeding 2 degrees.

Kerry: Aim to keep temperatures down to 1.5 degrees

According to the US special envoy for climate, Kerry, there is still the possibility of making “enormous progress” in the 28 days remaining before the Glasgow conference. Kerry called on all G20 countries to do more. The US, the EU, the UK, Canada, Japan have pledged to meet the 1.5 degree target and “India is on the right track,” he said. And on China, which remains one of the biggest questions, he said: «I don’t want to point the finger at anyone, we are working with the Chinese counterpart, we speak frequently, we have positive relations. My hope is that we can find some agreement with China. But I think that all the G20 countries, large and small, must do their part ». Kerry then emphasized that the goal is to contain the rise in global temperatures to 1.5 degrees: «The 2015 Paris agreement sets the target well below two degrees. Well below does not mean 1.9 degrees, nor 1.8 degrees. It is not politics or ideology. It is science and common sense that tell us that we have to limit the increase in temps to the minimum possible ».

Cingolani: “We want a more reasonable price for gas”

Then there is the chapter of aid to the most fragile countries in the face of climate change, the question of social justice strongly posed by the youth conference, Yputh4Climate, which preceded the Pre.Cop. Advanced economies had promised $ 100 billion a year, but are not delivering on the pledge. “In Glasgow we will have to prepare a plan for these sums to be disbursed by 2025,” said Sharma. Objective also underlined by the vice president of the EU Commission, Frans Timmermans. On the increase in the energy bill, which risks complicating EU plans on the energy transition, Cingolani said: “We hope that after the first quarter of 2022 there will be new international balances, new pipelines will be opened and therefore we will be able to obtain a reasonable price. for gas, but we continue to stick to the road map to get out of gas. This requires investments in renewables and also in the energy mix ».