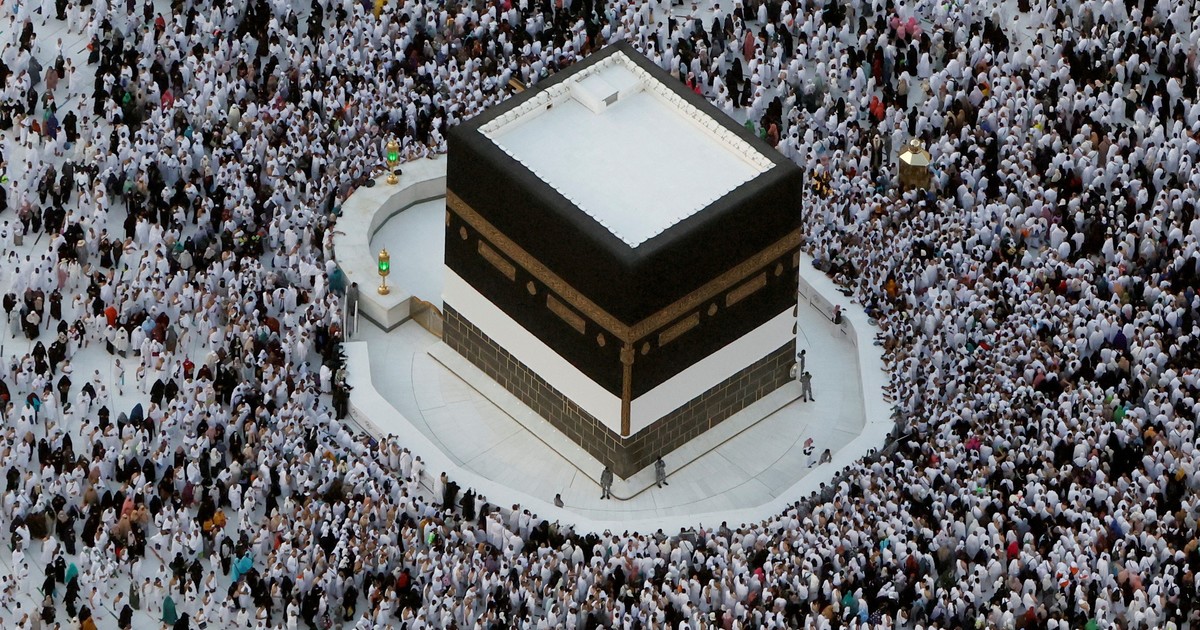 Hundreds of thousands of faithful, mostly without a mask, they started this Wednesday the pilgrimage to Mecca most crowded since the start of the coronavirus pandemic, in 2020

After two years of drastic limitations, one million muslims fully vaccinated including 850,000 from abroad, were able to participate in the hash.

The pilgrimage takes place around the holiest site in Islam, located in western Saudi Arabia.

At the Great Mosque of Mecca, pilgrims must complete the “tawaf,” the circumambulation around the Kaaba, a large cubic structure wrapped in the Kaaba Kiswa, a gold-embroidered black cloth toward which Muslims around the world flock. They return to pray.

The authorities indicated last month that the use of masks was going to be mandatory in the place, but this requirement has been ignored by the vast majority of those present.

This Wednesday, many pilgrims flocked to the place with umbrellas to protect themselves from a scorching sun on a day when temperatures reached 42 Cº.

The Kaaba Kiswa, a black cloth embroidered with gold, lining the Kaaba, towards which Muslims around the world turn to pray. Photo: EFE

The Saudi Arabian Ministry of Health indicated that it prepared 23 hospitals and 147 health centers in Mecca and Medina, the second holy city of Islam, to be able to serve the pilgrims, state media reported this week.

This includes installation of thousand beds for patients who may require care and more than 200 specific places for people with heart attacks.

They also mobilized 25,000 health workers to respond in case of an emergency.

Organizing this ritual is a considerable security challenge and several disasters have been recorded, including a stampede in 2015 that left nearly 2,300 dead.

“Everything is going very well for now. We have moved and we saw the rules and we respect them“, said Faten Abdel Moneim, a 65-year-old Egyptian woman who has five children. “I hope it continues like this.”

This year’s hash involves a larger movement than the 2020 and 2021 versions, but still less than normal times.

In 2019, some 2.5 million Muslims from around the world participated in the annual event, a pillar of Islam that every able-bodied Muslim must perform at least once in their life.

Posteriorlythe coronavirus forced a drastic reduction. Some 60,000 citizens and residents of Saudi Arabia, all vaccinated, participated in 2021, and only a few thousand did so in 2020.

The pilgrimage consists of a series of religious rituals which take place over five days in and around the holiest city in Islam, in western Saudi Arabia.

On Thursday, the pilgrims they will go to mineabout five kilometers from the Great Mosque, before the main ritual in el Monte Arafatwhere the prophet is believed to Muhammad gave his last sermon.

Organizing the hash is a matter of prestige and source of political legitimacy to the Saudi Arabian authorities.

With a value of at least $5,000 per personis also a source of income for the world’s largest oil producer, which seeks to diversify its economy.

In normal years, the pilgrimage generates billions of dollars.

Currently it represents an opportunity to show the social transformation of the country, despite the persistent claims of human rights abuses and limits to individual freedoms.

“Being here is the best thing that ever happened, I can’t wait for the rest,” said Egyptian pilgrim Naima Mohsen, 42, who she arrived alone at the Great Mosque.

“My only problem is the weather, it’s very hot,” he added.

The author is an AFP journalist