An affair that shakes the world: the leaders on target 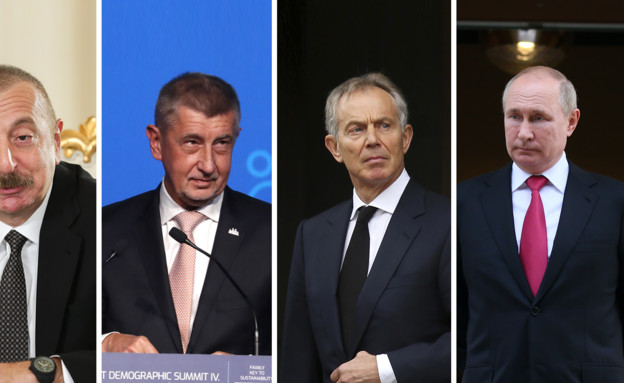 The Pandora document affair that was revealed yesterday (Sunday) is stirring and shaking the world. The 12 million documents revealed show worldwide activity for tax havens around the world, including in Panama, Dubai, Monaco, Switzerland, the Cayman Islands and the Virgin Islands. On target are dozens of great and well.known country leaders around the world, alongside thousands of well.known businessmen. In addition, hundreds of other public figures, including judges, ministers and others, also appear in the extensive investigation.

The Pandora affair is the biggest internal economic information leak event ever. In 2016, the Panama Papers affair exploded, which also dealt with international tax havens, and included 2.6 terabytes of information. A year later, “Paradise Documents” were unveiled, regarding a 1.4.tonne tax haven affair in the Bermuda Islands. Now, the “Pandora” affair reveals material amounting to almost 3 terabytes. Most of the documents are from the years 2020.1996, but some documents are even from the 70s.

Great leaders in the public eye

The King of Jordan, Abdullah II, is perhaps the most prominent name in the document publications. The documents show that he and his associates own about 36 companies that are registered in tax havens. Through these companies, he purchased for just over a decade luxury buildings in Malibu and Washington in the United States and London in the United Kingdom, for a total of more than $ 100 million. Everything happens in secret and while making sure to hide the connection between the king and these assets.

The King of Jordan declined to answer the Guardian’s questions on the matter, but made it clear that there was nothing wrong with holding assets through international companies. However, this publicity is very embarrassing to the monarchy, especially against the background of the public protest in the country following cases of corruption and against the background of the war on tax evasion declared in the kingdom.

Azerbaijani President Ilham Aliyev and his family also appear in the numerous documents. Among other things, the Aliyev family has traded in the British Crown’s assets in recent years for around £ 400 million through the international straw companies it operates. Transferred to a private company of the Aliyev family suspected of corruption. The Aliyev family declined to comment.

Two other senior figures featured in the documents are the leaders of two European countries: the Czech prime minister and the president of Ukraine. In the Czech Republic, Prime Minister Andrei Babish is in the midst of an election campaign in which he has to deal with questions about his use of an overseas investment company to buy a $ 22 million castle in the south of France.

Vladimir Zalansky, who was elected president of Ukraine in 2019 under a commitment to “clean up the corrupt economy” in his country, is also mentioned in the leak. During the campaign, according to the documents, he transferred 25% of his shares in a company abroad to a close friend who currently works as his senior adviser in Kiev. Zalansky refused to comment.

The President of Cyprus, Nikos Anastasiades, will also be required after the disclosure of the documents to explain why a company he owns privately owns an unreported company owned by a controversial Russian billionaire. The company denies any connection to illegal acts, and the president has made it clear that since he was elected head of the opposition in the country in 1997 he has not maintained any connection with the company.

Russian President Vladimir Putin, who often talks about the secret capital he holds, does not appear in cases revealed by his name – but people close to him do appear there, including his childhood best friend Peter Kolbin, who is considered a “wallet” for Putin’s wealth and one woman had a romantic relationship with the leader The Russian.

Other world.renowned officials mentioned in the documents are former British Prime Minister Tony Blair and his wife Cherry, who are suspected of “saving” more than £ 300,000 from taxing a property they bought in London from the family of a senior Bahraini politician. The couple in the documents also appear in the investigation: Munis Allahi, a senior Pakistani government official, Ohoro Kenia, the President of Kenya and other leaders.

Pandora’s documents reveal the secretive and dubious activities of many rich people around the world. Business management through the registration of different companies in tax havens has great significance for the countries due to the loss of tax revenue that those companies could pay them.

Examination of the leaked screens presents a complicated and ramified method for registering the memberships and trusts of various entrants in tax havens operating in the Virgin Islands, Cayman Islands, Panama, Singapore and more (12 in total). In this way there is little, if any, information on the real controlling shareholders and final beneficiaries of the property. In this way, many leaders around the world, who may be forced by their role to refrain from declaring much property, can continue to hold on to it.

It is important to say that the fact that a particular name appears in Pandora’s documents does not necessarily constitute proof that it has violated the law. For the registration of assets and companies in tax havens, some of which are legal and legitimate.

This issue last summer led the member states of the G7 forum to agree on a global corporate tax rate of 15%, with the intention that more countries would join the move. The disclosure of the documents sheds light on the global tax haven system – which US President Joe Biden has decided to fight, as part of his fight for large corporations and corporations to pay the proportional tax on their income. .