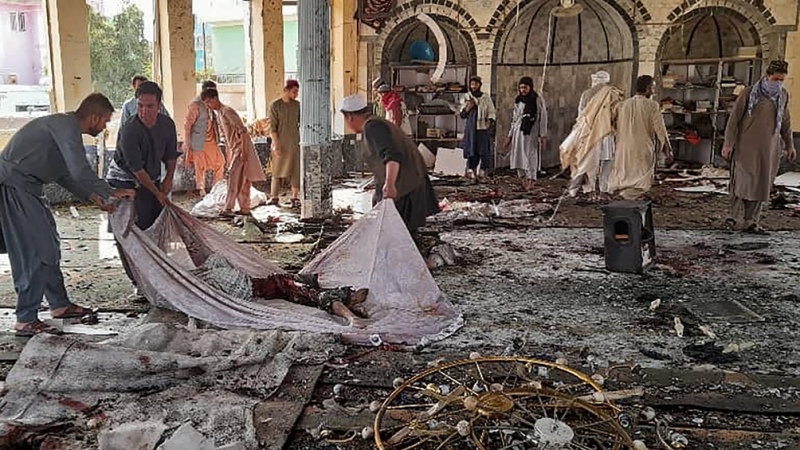 The detonation occurred during the noon prayer in the vicinity of the building, which was very crowded. Photo: AFP.

At least 55 people died and 140 were injured this Friday in an explosive attack on a Shiite mosque in the Afghan city of Kunduz, in the northeast of the country, medical sources reported.

The detonation occurred during the noon prayer in the vicinity of the building that was very crowded, according to witnesses.

“So far we have received 35 bodies and more than 50 wounded,” a doctor from the Kunduz central hospital, who did not want his identity to be disclosed, told the AFP news agency.

“There was an explosion in a mosque of our Shiite compatriots in the Khan Abad district of Bandar, the capital of Kunduz province, causing several deaths and injuries.”said Taliban spokesman Zabihul Muhajid.

The local media initially reported 15 dead, but medical sources later cited by the AFP and Sputnik news agencies indicated that at least 55 were killed and 140 were injured.

Images shared on social media showed several bloody bodies lying on the ground and a video of a man taking people, including women and children, away from the scene.

“It was terrifying; some neighbors were killed or injured. A 16.year.old neighbor died, we could only find half of his body,” said a teacher who lives near the mosque. “Ambulances came and went to transport the bodies,” he added.

This attack was not claimed so farBut the jihadist group Islamic State (IS), a rival of the Taliban, carried out similar self.inflicted acts in recent weeks.

Five days ago, he claimed responsibility for an attack on a Kabul mosque that left five dead. A funeral ceremony was held at the site following the death of the mother of Zabihullah Mujahid, the main Talibn spokesperson, who died last week.

In Afghanistan, Shiites, who make up 20% of the population, are often targeted by attacks, perpetrated in most cases by the local branch of IS, the Islamic State.Khorasan (IS.K).

The multiple attacks left dozens of civilian and Taliban victims, mostly in Kabul and in the eastern state of Nangarhar, which borders Pakistan and is a stronghold of ISIS in Afghanistan.

This group was responsible for some of the bloodiest attacks in recent years in Afghanistan and Pakistan, including suicide bombings in mosques, hospitals and other public places.

For instance, In August 2019, IS claimed an attack on Shiites during a wedding in Kabul, in which 91 people died.

You are also held responsible for a May 2020 attack on the maternity ward in a predominantly Shiite neighborhood of the Afghan capital that killed 25 people, including 16 mothers and several newborns.

On the 26th of that month, more than 100 people were killed, including 13 US soldiers, in an attack in the Kabul airport area also claimed by IS.K.

The United Nations warned this Friday that only a third of the emergency aid requested for Afghanistan was distributed, threatened by a possible humanitarian crisis”

“Today’s events are part of a worrying trend of violence,” lamented the UN mission in Afghanistan (Unama) in a tweet.

The United Nations also warned this Friday that only a third of the emergency aid requested for Afghanistan was distributed, threatened by a possible humanitarian crisis.

These attacks left dozens of civilian and Taliban victims, mostly in Kabul and in the eastern state of Nangarhar, bordering Pakistan and a stronghold of ISIS in Afghanistan.