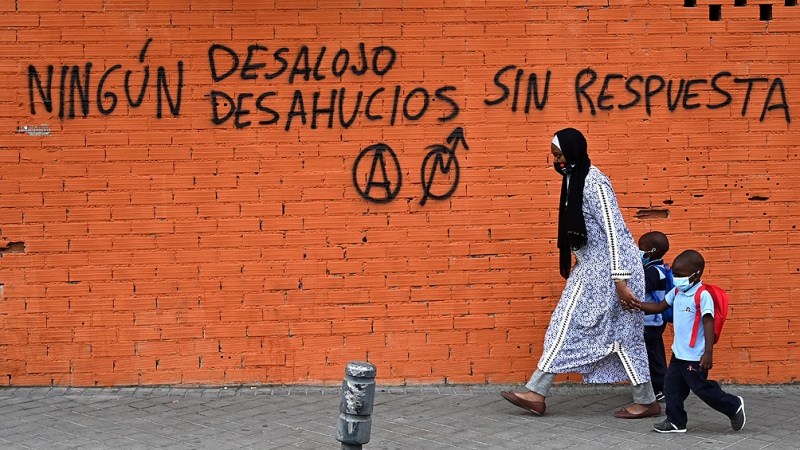 In Spain, housing policy is the responsibility of the autonomous communities and those governed by the PP. Photo: AFP

The Spanish Government announced this week a housing law that, among its central points, regulate rental prices and penalize vacant properties, an initiative that seeks to solve the deficits in the area, which affect almost a quarter of its population, but that It is rejected by the opposition, which does not implement it in the communities where it governs and goes to court to annul it.

The government coalition formed by PSOE and United We can agree on the project after arduous negotiations in which each party yielded and conceded: the socialists agreed to regulate the amounts of rents, something that in principle they are opposed, and in return, their partners will give his support in Congress for the Budget Law 2022, which provides for the highest social spending in history.

One of the axes of the initiative will be to oblige legal entities (real estate and investment funds) with at least 10 homes to lower rents based on a benchmark index, while those owners with less than 10 properties will have to freeze prices and in return receive tax incentives.

The A great barrier to moving forward with this is that in Spain, housing policy is the responsibility of the autonomous communities and those governed by the opposition Popular Party (PP) have already announced that they will not advance their implementation by pointing out that it is “an attack on private property.”

The force leads the communities of Andalusia, Madrid, Galicia, Castilla y Len and Murcia, which together have more than 21 million inhabitants and concentrate almost half of the 290,758 owners with more than 10 properties that will be affected by the legislation. the newspaper El Pas.

Neither apply another central point of the project: a surcharge of up to 150% in the Real Estate Tax (IBI) for uninhabited homes, belong to a natural or legal person who has more than four properties.

The President of the Government of Spain, Pedro Snchez, defended the “balance” of the text to be “socially committed” and of “absolute” respect for private property, for which he asked the parties to build a “state agreement” around the regulations.

Nevertheless, the leader of the PP, Pablo Casado, described the initiative as “suicidal interventionism” and I anticipated going to the Constitutional Court to annul the law once it is approved.

Along the same lines, the far.right party Vox and the Liberals of Ciudadanos, as well as the large real estate companies, joined the rejection under the argument that it will generate a lower supply of properties for rent and, therefore, an increase in the amount to be paid.

We are in favor of people doing what they want with what is theirs.

We will resort to the Constitutional Law of Sanchez housing and will not apply the CCAA and municipalities of the PP.

But the context shows that the invisible hand of the market did not solve the problems, but on the contrary caused them: rise in prices in purchases and rentals, especially in large cities, lack of social housing, evictions, precariousness and exclusion make up the current panorama. aggravated by the coronavirus pandemic.

Specific, 23.7% of the population is affected by some indicator of exclusion in housing such as deficiencies in construction, overcrowding, architectural barriers for people with disabilities and excessive expenses, according to a recent report by the Foessa Foundation of Critas Espaa.

“From the third sector entities we have been warning for years that housing is a very important social determinant to explain the processes of exclusion and poverty”, explained to Tlam Aitana Alguacil, socilologist and technical of incidence and studies of the European Network of Struggle Against Poverty and Social Exclusion in Spain (Eapn.Es)

23.7% of the population is affected by some indicator of exclusion in housing such as deficiencies in construction, overcrowding, architectural barriers for people with disabilities and excessive expenses”

The representative of the NGO pointed out that “Public housing built today is the lowest since the 1950s” and he remarked that “since 2008 the investment of the General State Budgets dedicated to housing policy decreased by 69%”.

“The last budgets, those that came out last year, reversed this and increased it by around 300% and what we propose is that it is essential to establish this trend,” added the expert.

In that sense called the decision to advance a law “historic” since “until now there is no specific policy” in the area, beyond the article of the Constitution that enshrines the “right to enjoy a decent and adequate home.”

The project announced by the Government also ratifies the construction of some 20,000 social properties, the rehabilitation of entire neighborhoods and expands the supply of so.called protected housing, accessible at more affordable prices to those who meet certain maximum income requirements, and social, specific for groups that are in a situation of even greater vulnerability.

In addition, it includes a direct help for the rent of 250 euros per month for people between 18 and 35 years old who have low salaries, with the aim of helping them with the rent and, on the other hand, establishes protection measures against evictions.

Sheriff valued these guidelines but indicated that The fine print of the project has not yet been presented to ponder it: “It is not known if it is a help per household or per person. It is not the same for a young person to have 250 euros a month to pay for an apartment, to be 500 in the event that his partner with whom he lives also receives it” .

In the same way, he stated that the suspension of evictions is a measure that is already governed by the so.called “social shield” decreed in the face of the pandemic, which did not prevent them from continuing to occur: “In 2020 there were 18,900 homes affected by foreclosures, of which 7,000 were regular homes.”