Kurtz and Netanyahu: The difference in positive coverage in Austria and Israel 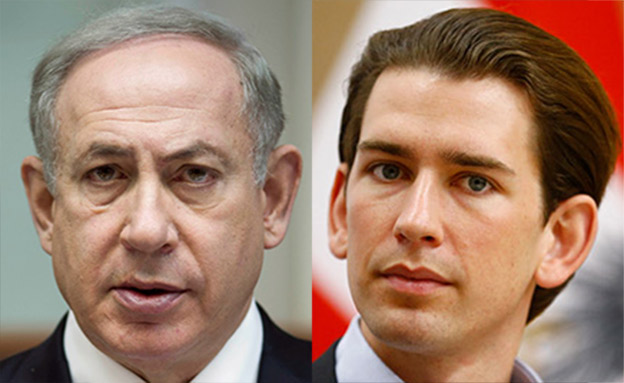 Austrian Chancellor Sebastian Kurz resigned yesterday (Saturday) following a spate of suspicions against him that he and nine members of his party had bribed the media in the country for positive coverage. According to the suspicion, during the years 2018.2016, they allegedly transferred public funds to various media outlets in the country, in order to present election results in a positive and flattering light. In May 2017, Kurtz led his party to victory in the election.

Kurtz, along with nine people and 3 other government bodies, are at the center of an investigation currently underway in Austria. The main suspicions against them are breach of trust and accepting bribes. According to the suspicion, Kurtz and his partners forged receipts from the Austrian Ministry of Finance amounting to 1.2 million euros, which were transferred to a media group in exchange for publishing polls and biased opinion columns in his favor. The Austrian chancellor made it clear that the suspicions against him were “baseless” and announced that he had done nothing wrong.

The suspicions that arise against Kurtz, an incumbent leader in an important country in Europe and who is considered a great friend of the State of Israel, are naturally reminiscent of the suspicions that arose against former Prime Minister Benjamin Netanyahu. In recent years, suspicions have begun to arise against Netanyahu, while he is serving as prime minister, for various offenses – in what later became three different cases. In November 2019, Attorney General Avichai Mandelblit filed an indictment against Netanyahu for bribery, fraud and breach of trust. Despite the similarities between the two cases, there is also a significant difference.

Although the offenses for which Kurtz is suspected and Netanyahu is charged are similar and deal with accepting bribes in the form of positive press coverage, in both cases a different gift was allegedly given for this consideration. In Netanyahu’s case, as is well known, he is accused in the 4000 case that he received positive coverage on the Walla website for promoting transactions and regulatory benefits for the former owners of the site, Shaul Alovich. In the case of Kurtz, he is suspected of allegedly transferring public funds held by his party during his election campaign to newspapers and media for positive press coverage. The investigation into Kurtz’s case is still in its infancy, and Austrian media suspected of involvement in the affair have not yet been published.

At the political and public level, too, there are differences between the cases of Netanyahu and Kurtz, due to the fact that the Austrian chancellor announced his resignation at an early stage of the affair, when it is still in the investigation stages only. In contrast, former Prime Minister Netanyahu refused to resign, announced that he was denying charges against him, and for four election campaigns tried to obtain a majority that would guarantee him the continuation of his term in office.

Although many declare that “there will be nothing because there was nothing,” Netanyahu eventually lost the last election. Although he did not resign, at least some of the parties announced that they would refuse to sit in government along with a man accused of crimes, which eventually led to a series of election campaigns and a political decision against him. Kurtz, on the other hand, resigned immediately, although he too announced that he was denying the guilt attributed to him.

It is important to understand that Kurtz’s resignation from the post of Chancellor does not necessarily stem from the fact that he advocates the correctness of the rule of Austrian law. In fact, the move came after a threat from the Green Party in Austria, the main partner of the Austrian People’s Party (OVP), led by Kurtz, that it would disband the joint government if he remained in office during the investigation and suspicions against him.

On Tuesday, a no.confidence vote was scheduled against the continuation of Kurtz’s term. The chancellor, who feared the fall of the government and another election in just a few years, and without his government still passing a budget, announced: “What we need now is stability. To resolve this stalemate, I want to clear the way and prevent chaos.” Kurtz will be replaced by the Austrian Foreign Minister in his government, Alexander Schlenberg.