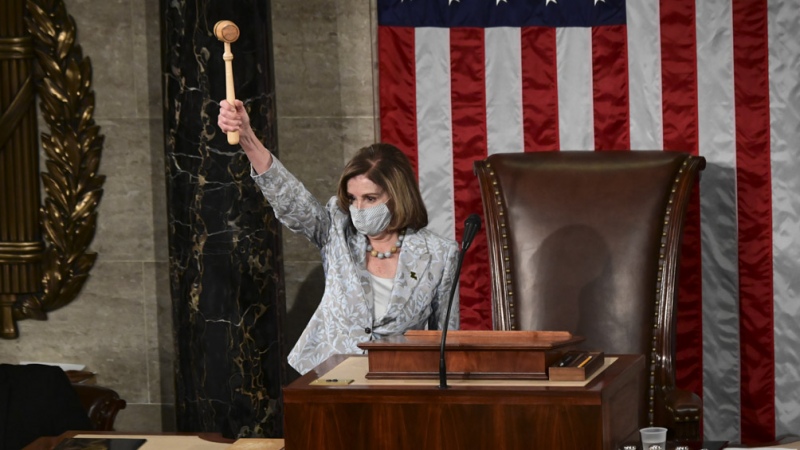 Nancy Pelosi had warned that the suspension of payments would cause a shock wave through world financial markets,

The United States House of Representatives sanctioned this Tuesday, based on a temporary agreement between Democrats and Republicans, the temporary increase in the external debt ceiling to avoid a default that would have triggered a recession and agitated world markets.

The advance, which will give air at least until the beginning of December to the Joe Biden administration, because it allows adding another 480,000 million dollars to the available debt limitIt came just six days after the country could no longer borrow money or pay loans for the first time in its history.

La decisin fEU approved by 219 votes in favor and 206 against, and by Thursday he had gotten the go.ahead from the Senate, so only Biden’s enactment remains.

Actually, the agreement came last week and that is why the approval in the Senate was achieved based on an expansion of the public debt ceiling, but very limited and only to reach the end of the year.

That proposal had initially been rejected by the Democratic administration weeks ago, but the proximity of the deadline ended up generating its acceptance, as a way to buy time.

The proposal included something vital for the ruling party: that the extension of the debt limit could be approved by a simple majority, so that in the face of a foreseeable tie at 540 votes – those held by each Senate bench – Vice President Kamala Harris could use his tiebreaker vote, although later it was not necessary to appeal to that instance.

With the deadline of October 18 closer, Biden had made public his annoyance with the Republican opposition that refused to approve the increase in the limit on public indebtedness., but also with some ruling party members who reject one of its main economic projects, its ambitious infrastructure plan, which continues to be held back in Congress.

The concern reached such a point in the White House that Biden met last Wednesday with CEOs of American companies to defend the need to increase, once again, the public debt ceiling, and to pressure the Republicans from the side that most It bothers them: the private sector.

10 days ago the secretary of the United States Department of the Treasury, Janet Yellen, had officially asked Congress to increase the government’s debt limit before Monday the 18th., when the current limit expires, and was forceful in stating that, if this did not happen, the country could enter a financial crisis and an unprecedented recession.

The House of Representatives voted in favor of raising the debt ceiling, the Senate had already done it last week

“It is appalling that our nation is in this situation, but we must take immediate action to address the debt limit and ensure that the full faith and credit confidence in the United States remains intact,” noted the House Majority Leader. of Representatives, Democrat Steny Hoyer.

House Chief Nancy Pelosi failed to win approval with an overwhelming majority, as a message of strength in the face of the risk of a crisis

Likewise, he warned that if in the long term the debt ceiling is not significantly increased, the economic impact will be “enormous” and the country could lose “six million jobs.”

“The suspension of payments will cause a shock wave through the world financial markets”, alert.

The US economy seems to be beginning to recover steadily only now after the marches and countermarches of the last year of the Donald Trump presidency with the pandemic and the repeated outbreaks of coronavirus that forced governors and mayors to impose restrictions and quarantines.

In the new negotiation, the ruling party will not only have to achieve an increase in the public debt ceiling to continue operating next year, but before December 3, it must also have the new budget approved and promulgated.

If the Biden government does not achieve any of these objectives, it will not only go into default, but also face a “government shutdown”, a figure that in the United States explains when the Executive runs out of funds and must close all offices You don’t consider it strategic and send thousands of federal employees home without pay.

The last time this happened was during the government of Barack Obama, also a Democrat, after losing control of Congress and facing stiff opposition from Republicans on Capitol Hill, which even led to years of virtual legislative paralysis.