The “sparks” in the first confrontation between Michetti and Gualtieri 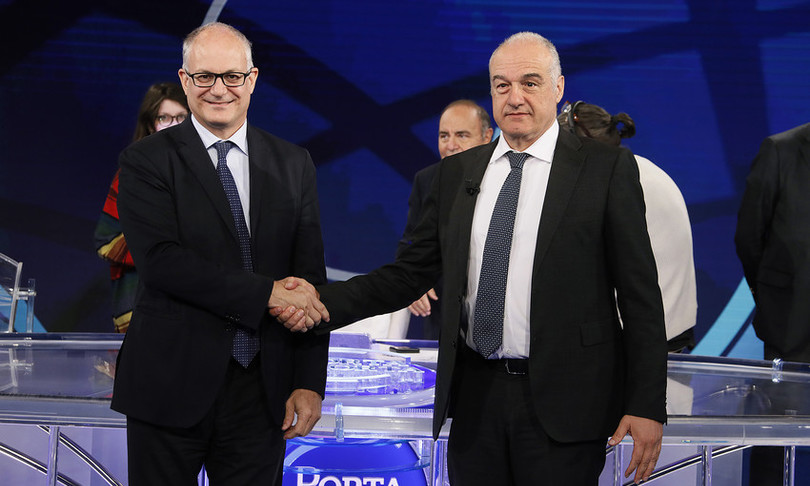 The first confrontation between Enrico Michetti and Roberto Gualtieri, four days after the vote for the ballot, is stingy with emotions. In the living room of Porta a Porta the two challengers for the Capitol (divided by 35 thousand votes after the first round) talk about programs and indulge in a few skirmishes.

After the personal endorsements for Gualtieri of M5s leader Giuseppe Conte and Carlo Calenda, to press the most is the lawyer of the center, who has so far deserted most of the polls to four. The main differences on waste management, the management of NRP funds, financial resources for Rome.

And then, of course, the management of public order after last Saturday’s no green pass demonstration with the violence perpetrated by elements of the extreme right. Michetti, who today signed a pact for the city with the leaders of the center.right, repeats several times that his trump card for the great projects of the next few years – from the Jubilee to the candidacy for Expo – is Guido Bertolaso. Gualtieri, on the strength of the support received beyond the coalition, in recent days, illustrates the first moves on waste and transport if he is elected.

Michetti’s first thrust on the PNRR “Gualtieri as minister put zero for Rome in the Recovery, perhaps he was not thinking of running for mayor at that moment”. The reply from the former Mef owner: “I will give him an underlined copy of the Recovery, to let him know that with Caput Mundi Rome is the only city to have a dedicated fund. The money is there, the problem is being able to spend it by preparing well the notices “.

“We need plants, the most modern possible. The Lazio Region has a huge responsibility in this. We need a task force of at least 6 months to intervene immediately and take away the waste”, says Michetti. “As a first act, an extraordinary cleaning of the city is needed. Then increase the differentiation, in the first two years we aim to reach 50%, and then 65% .70% within the mandate. Then, of course, new plants are needed: a new Tmb, a biorefinery and others “, proposes Gualtieri.

So a short confrontation. Michetti insists: “The Lazio Region had to foresee some plants, it remained in default. It created this environmental disaster. Is it possible that it has not exercised its commissioner powers for 10 years?”.

Gualtieri replies: “All this nostalgia for Malagrotta, which in fact Bertolaso ​​wants to reopen, does not seem to me to be the case. In addition to the Recovery I will also give Michetti a text of law, yet he should know it: the Municipality must do the systems. He makes a political attack only to hit the Lazio Region “.

The confrontation flows away composed, without great jolts. In the final minutes, the center.right ‘tribune’ recalls: “The government began to think about Rome, Paris had 44 billion, nothing here”. The former minister repeats it: “In the meantime, it would be good to avoid broken words like those used today against the minister Lamorgese by Giorgia Meloni, who in fact claimed that the clashes on Saturday were essentially a conspiracy “.

Michetti disputes: “What has this to do with the question of funds”. Gualtieri concludes: “It would be good if the inspiration for safety mentioned by Michetti had been present in the composition of his lists, which include elements close to CasaPound”. All awaiting the rerun on Thursday, this time on Sky.