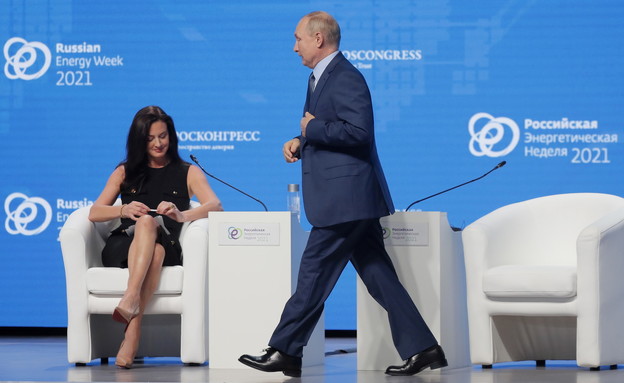 Putin accused of chauvinism: Russian President Vladimir Putin drew much criticism this week after making a chauvinistic remark to a journalist who interviewed him during Moscow’s Gas and Energy Week. In an interview Putin gave to a network journalist CNBC Heideli Gamble on Wednesday he remarked to her “you are too beautiful to understand what I am saying”, in response to a professional question she asked him.

The President of Russia spoke during a special conference on the export of Russian gas to European countries. When asked, in front of a large audience in the hall, whether Russia has recently intentionally exported less gas to Europe in order to bring about a rise in prices.

Gamble’s question seemed to annoy the Russian president, who told her: “Beautiful woman, I tell her one thing and she automatically tells me the opposite, as if she does not understand what I am saying.” Putin said the answer to Gamble, which was asked in English, in Russian – in an interview conducted in two languages ​​using simultaneous translation.

“I heard what you said,” Gamble replied to the Russian president, without trying to hide her displeasure with the question. She told Putin that despite his response she was interested in knowing why Russia takes so long to increase energy exports to Europe.

Putin, for his part, did not remain obligated and insisted that her claims were untrue. “Someone must have misled you. We are not reducing exports but increasing it. Did I say something that is so complicated to understand?” After the interview, Gamble posted a photo on her Twitter account, in which she is seen walking upright and behind her, Putin is seen bent over in the dark.

Recently, many researchers and commentators have argued that Putin and Russia are interested in bringing about a sharp rise in energy prices, under which Russia exports natural gas to Europe. Last month, the construction of the “Nord Stream 2” gas pipeline, which was intended to transport gas from Russia to Germany, was completed. At this stage, gas flow has not yet begun, and is conditional on the completion of regulatory operations in Germany.